South Africa's most populous province, Gauteng, is now recording more Covid-19 cases every day than at any point during the Western Cape's outbreak.

So far, the Western Cape has been the hardest-hit province. As of Friday, the province recorded 57 941 cases - 48% of the Covid-19 cases nationally.

On 26 June, Gauteng recorded 2 598 new cases and 2 590 on 25 June – both representing the highest increases in cases in a single day in any province.

In comparison, the Western Cape's highest rise in cases in a single day was reported on 4 June, with 2 349 cases. These increases have also pushed the average daily increase in cases on a seven-day rolling average basis in Gauteng to more than 2 000 a day, also the highest increase in cases in any province since the first case was confirmed on 5 March.

This heralds a significant shift in the behaviour of the Covid-19 outbreak in Gauteng and the Eastern Cape.

Gauteng is, however, expected to record the highest number of cases and deaths nationally, according to projections used by government.

"The current surge of Covid-19 cases we are experiencing in Gauteng is expected," the Gauteng health department said in its daily statement on Saturday.

"Increased movement and mobility of people is one of the contributing factors of the rise in number of confirmed Covid-19 cases. We continue to observe cluster outbreaks from gatherings," the department said.

"The numbers will continue to increase as we head towards the peak." Despite the growth in cases being higher cumulatively and faster daily in Gauteng than in the Eastern Cape, the Eastern Cape recorded 371 deaths compared to 149 deaths in Gauteng, according to figures released on Friday.

It remains unclear how changes in testing strategies are affecting the number of cases found and reported.

There has, however, been no communication to the public on when this will happen and what impact changes in the testing strategy – necessitated by significant shortages of testing and extraction kits – will have or are having. 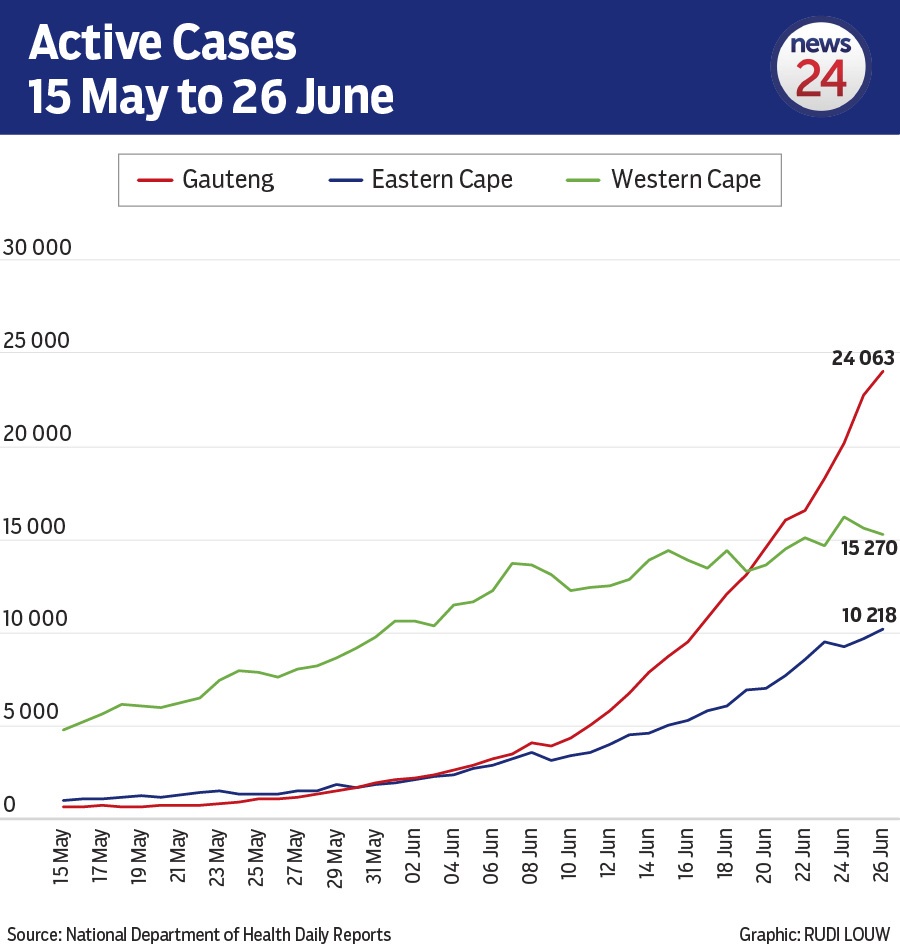 The sudden surge in cases in Gauteng also means that the province has recorded the highest number of concurrent active cases in a day – 24 063 as of 26 June, a 1 276 jump in recoveries in a day. The previous highest number of active cases was recorded in the Western Cape on 24 June, at a little more than 16 000 cases.

But, the active cases calculation is fraught with pitfalls.

"The number of 'active' cases is calculated as the number of confirmed cases minus the number of those who have recovered (or number died, if known). This is an intermediate between prevalence and incidence," Professor Nelesh Govender of the National Institute for Communicable Diseases previously explained.

Govender said using an 'active cases' metric had several limitations because of:

It is not clear if provinces are reporting recoveries without confirmed laboratory tests if people have not displayed symptoms for 14 days – which would be considered a clinical diagnosis of recovery. According to the latest modelling by the SA Covid-19 Modelling Consortium, dated 12 June and published this week, it is estimated that Gauteng will record 115 000 cases by mid-July.

In comparison, the Western Cape is estimated will record 189 000 cases and the Eastern Cape 56 000 by mid-July.

All three provinces reported new deaths, bringing the cumulative number of deaths to 1 732 in the Western Cape, 384 in the Eastern Cape and 166 in Gauteng. Here are your Lotto and Lotto Plus results
Full list of lottery results
Lockdown For
DAYS
HRS
MINS
Voting Booth
South Africa has over 150 000 Covid-19 cases. Do you know someone who has been infected?
Please select an option Oops! Something went wrong, please try again later.
Yes I do
26% - 1855 votes
Yes, more than one person
24% - 1749 votes
No I don't
50% - 3555 votes
Previous Results
Podcasts
PODCAST | THE STORY: Delays remain the name of the game for Zuma’s corruption case