INFOGRAPHICS | SA breaches 200 000 coronavirus cases, with half of those coming in just 14 days The number of confirmed cases of Covid-19 in South Africa on Monday topped the 200 000-case mark - double the number of cases reported just 14 days ago on 22 June.

This means that 100 000 coronavirus cases were recorded in 14 days across the country, compared to the 110 days it took since the first confirmed case on 5 March to reach the first 100 000 cases.

This surge in cases can be attributed to a significant spike in the number of cases being found in Gauteng, the most densely populated province in the country.

Mapping confirmed cases by day of each province's respective local epidemic provides clarity on how fast Gauteng has caught up to the Western Cape. As of Monday, Gauteng had reported 66 891 confirmed cases, quickly catching up to the Western Cape which has 70 938 cases.

On 13 June, 99 days after the first Covid-19 case was confirmed in Gauteng, the province had less than 10 000 confirmed cases, and had, on average, reported 88 new cases a day.

This exponential spike in cases is clearly visible when the daily increase in cases is set out on a seven-day average basis, such as in this graph. 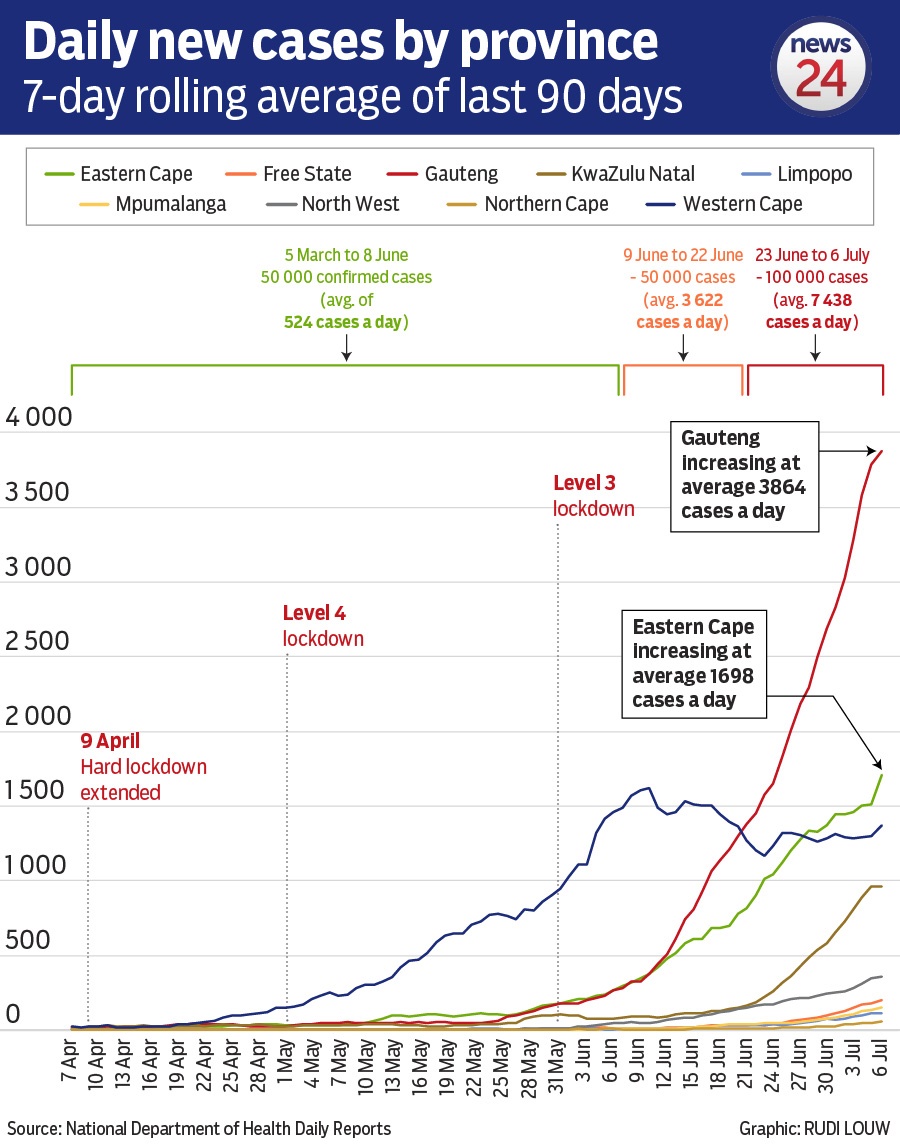 For the week leading up to 6 July, Gauteng and the Eastern Cape reported a daily increase in cases far exceeding that of the Western Cape.

But when plotted on graphs using the same axis values, the gravity of the Gauteng surge compared with the Western Cape is clear. But, Gauteng has also tested more people than any other province. Geographically the smallest province, Gauteng is home to, by far the highest number of people. According to Statistics South Africa, the 2019 mid-year population estimate for Gauteng is 15.2 million.

"In the past week [Week 26, 21 to 27 June] Gauteng province performed the largest numbers of tests, accounting for 40% of tests nationally. Except for a decrease in weekly testing due to supply shortages between week 20 and 23, the number of samples tested in Gauteng has been increasing every week," the National Institute for Communicable Diseases stated in its latest testing summary report published last week.

"Testing volumes in the Western Cape have been decreasing since week 21. This follows changes in the testing strategy in the province to focus on hospitalised individuals and individuals with underlying risk conditions," the report adds. The number of tests conducted per province is not reported by the provinces or the national Department of Health on a regular basis. Initially, the Western Cape had weighted the national Covid-19 numbers significantly, lending a skewed perception over the spread of the virus in all provinces. Now however, the numbers reported in Gauteng are having the same effect.

Gauteng is however recording cases at a higher rate than at any point during the Western Cape outbreak and cases are doubling in the province roughly every nine days.

The doubling rate observed from reported figures in other provinces is also, worryingly, at eight days in KwaZulu-Natal, 12 days in the Eastern Cape and nine days in the North West.

The current observed doubling rate in the Western Cape is roughly 25 days.

But the Eastern Cape became the second province to report more than 500 Covid-19 deaths over the weekend. It is expected that the number of deaths in Gauteng will rise proportionately in the coming days and weeks due to the large spike in cases. Last week, News24 reported that public healthcare facilities in Gauteng were already at capacity. Private hospitals were starting to feel the strain, but were not yet full, News24 reported on Sunday. 1 person bags R378k in the Daily Lotto jackpot
Full list of lottery results
Lockdown For
DAYS
HRS
MINS
Voting Booth
Should CEOs salaries be capped in SA?
Please select an option Oops! Something went wrong, please try again later.
Yes, they are hugely overpaid.
44% - 3782 votes
No, shareholders already have a say in what they get paid.
30% - 2572 votes
The focus should be on what workers get paid - SA's minimum wage should be lifted.
25% - 2168 votes
Previous Results
Podcasts
PODCAST | THE STORY: Dodgy PPE tender procurements land government officials in hot water