In the fight against Covid-19, the Western Cape trails other provinces on only two battlefronts – the number of contacts traced, and the number of people screened and referred for testing.

But, according to Premier Alan Winde, his province shows a lower number of people referred from community screening because of a change in its testing strategy in recent weeks, to focus more on healthcare workers and hospitalised patients.

This stratagem shift is clear in reported data – the province tested a little more than double the number of people in hospitals than the next closest province, Gauteng, for the week of 17 to 23 May.

It has also recorded a higher number of people hospitalised overall – a clear sign that it is dealing with an epidemic several weeks ahead of the rest of the country.

Gauteng, which is projected will have the highest number of cases by the end of the year, and the Eastern Cape both only reached the 4 000-case mark on Monday – roughly three weeks behind the Western Cape.

The debate, which will likely only be settled months from now, is whether the trajectory of the province will be repeated elsewhere in provinces that have had longer to prepare for the expected spike in infections, and longer to put in place effective contact tracing.

It also remains unclear whether lockdown measures had any positive impact on the rate of transmission, which in the Western Cape at least, appears to have grown despite lockdown. One government epidemiologist, who asked not to be named, told News24 the higher infection rate in the Western Cape was probably due to multiple factors, including early and multiple seeding combined with an earlier transmission of cases from the middle class into informal settlements.

They agreed it was likely that Gauteng, the Eastern Cape and KwaZulu-Natal were a few weeks behind.

Comparatively, the number of deaths as of 1 June in Gauteng was 33, and 82 in the Eastern Cape, which is showing worrying signs of following a very similar trajectory as its neighbour – with lockdown restrictions eased since 1 June nationally, it is likely the rate of infections will increase.

The latest Covid-19 projections for the Western Cape, shared with the media this week, show that based on the current rate of hospitalisations, mortality and infections, 9 300 people could die in the next six months in the province alone. The projections were presented by Dr Sheetal Silal, the head of the Modelling and Simulation Hub, Africa (Masha) from the University of Cape Town, which is part of the SA Covid-19 Modelling Consortium.

If the current trajectories remained it "would make us a tragic exception to the rest of the world", public health expert Professor Andrew Boulle, also of UCT, said during a press briefing with Winde on Wednesday.

In terms of the fight against Covid-19, the Western Cape trails the rest of the country on two fronts – contact tracing, and the number of people it refers for testing from its community screening programme.

Since the start of the screening efforts, 13 million South Africans have been screened, but each province has referred varying numbers for testing.

Considering the insistence of the province that it was aggressively testing and screening hotspot areas, and was finding cases at a much higher rate, it was expected it would have referred the most people from screening. But, according to a presentation by Health Minister Zweli Mkhize before Parliament's health portfolio committee on Tuesday, the province had referred only 11 462 people from a total of 507 884 screened - the lowest number from any province when coupled with the higher positive testing rate for hospitalised patients and shows the Covid-19 epidemic in the province is much further advanced.

The latest weekly testing analysis published by the National Institute for Communicable Diseases (NICD) shows that 4 145 tests were conducted on people in healthcare facilities, compared with 1 181 tested from community screening for the week of 11 to 17 May.

This, when coupled with the lower number of contacts traced, seems to be in direct contradiction with the province's communicated testing and tracing strategy.

Of those tested in healthcare facilities and through screening, between 21 and 23% tested positive, while the overall positive test rate increased from 14%, to 24%. 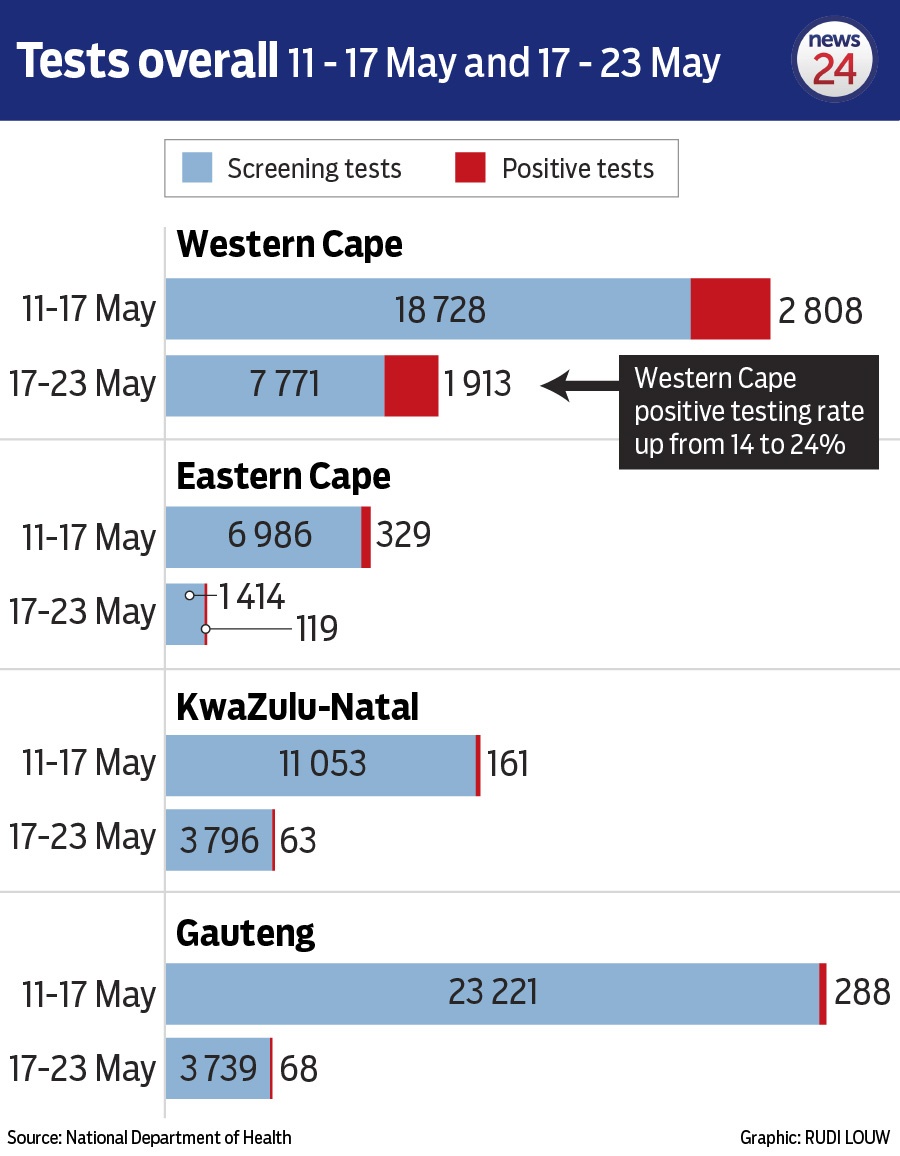 The number of Covid-19 tests conducted overall by province, according to data from the National Institute for Communicable Diseases. These tests are accounted for according to date of sample collection, not the date reported. Winde said the change in strategy was necessary to preserve tests for crucial categories – such as healthcare workers and patients already admitted to hospitals – as a result of severe pressure on testing.

"As of last week, we had to change that approach… we have got to reserve tests for in our hospitals, for our healthcare professionals, but also to make a decision in a hospital as to whether [a] person must go to the Covid-19 ward or perhaps [just] get treatment for regular flu," Winde said during a press briefing on Thursday.

"That's really important, with testing under such severe pressure at the moment, I think [we are] 100 000 tests behind in the backlog at the moment in South Africa," he said.

The Department of Health, after some initial confusion, said in a press release issued late on Thursday, the national backlog was 96 480 tests in public laboratories – 18 000 of those were tests from the Western Cape.

We live in a world where facts and fiction get blurred
In times of uncertainty you need journalism you can trust. For only R75 per month, you have access to a world of in-depth analyses, investigative journalism, top opinions and a range of features. Journalism strengthens democracy. Invest in the future today.
Subscribe to News24
Related Links
Large quantities of PPE 'disappear' in KZN, costing education dept 'millions'
WATCH | Spot the difference: Striking visuals of lockdown day one vs Level 3 day one
WATCH | Mkhize gets first look into hi-tech field hospitals in Khayelitsha and Brackenfell
Next on News24
'Pick your battles': McBride goes toe to toe with top cop Khehla Sitole

3 bag the jackpot in the Daily Lotto
Full list of lottery results
Lockdown For
DAYS
HRS
MINS
Voting Booth
Have you ever purchased a fake luxury/designer item?
Please select an option Oops! Something went wrong, please try again later.
Yes, I believed it was authentic
7% - 201 votes
Yes, I didn't want to spend that much money on the original item
20% - 597 votes
No, I always shop at reputable stores
14% - 412 votes
No, I don't wear designer clothing
60% - 1785 votes
Previous Results
Podcasts
PODCAST | The Story: Spotlight on filicide - what triggered Lauren Dickason? And how to get help