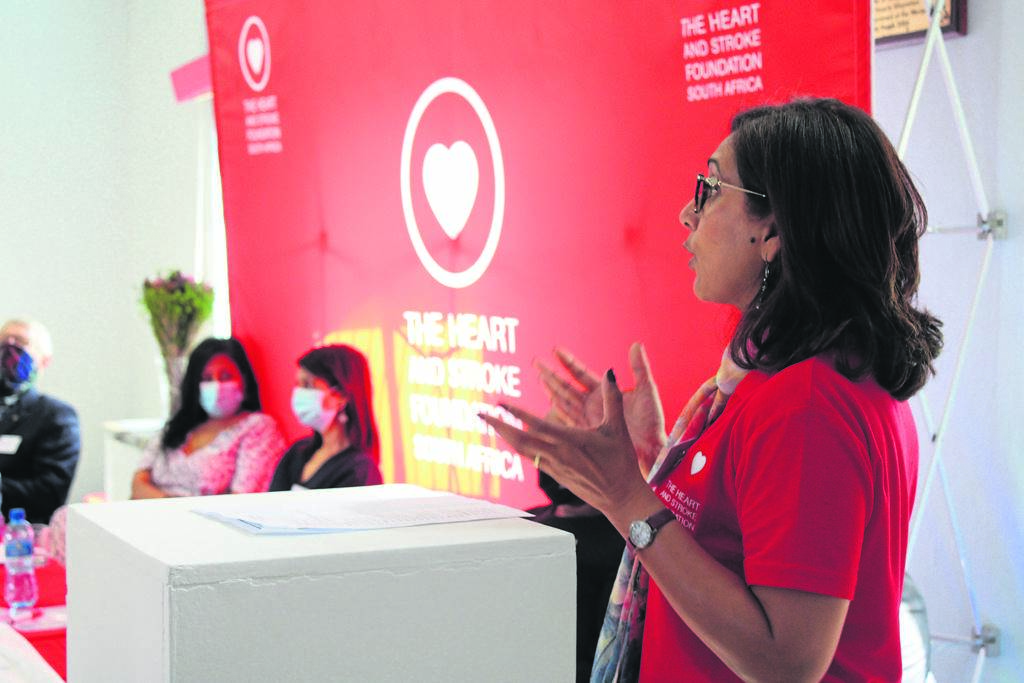 Professor Pamela Naidoo speaking during the launch of The Hear and Stroke first mobile clinic in Khayelitsha on Monday 12 April. PHOTO: MZWANELE MKALIPI

With 215 people dying daily in South Africa due to heart-related illnesses, and five people suffering heart attacks every hour, the Heart and Stroke Foundation of South Africa (HSFSA) is working tirelessly to change the tide.

On Monday 12 April, the foundation launched its first mobile clinic at the Grandmothers Against Poverty and Aids (GAPA), in Khayelitsha, to provide essential preventative health screenings to the most vulnerable members of the community, starting with the elderly.

The high-tech mobile clinic was established with grant funding from the National Lotteries Commission. It is the first of a series of the HSFSA mobile clinics to be launched across the country. It will visit some of the most remote areas around Cape Town, its first stop being GAPA.

At the launch residents were reminded that a healthy lifestyle is everyone’s responsibility, and not the government’s. Residents were urged to cut down alcohol consumption, practise healthy eating and start exercising.

“The daily chores you do at home, such as sweeping, are part of being active,” she pointed out. “Please avoid drinking too much alcohol and start eating healthily while exercising.” Leo revealed that in South Africa 215 people die every day from heart disease, with five people, on average per day suffering heart attacks every hour.

She said the clinic would create cardiovascular disease awareness in different communities. Heart and stroke impacted a lot on hospitals, Leo added, and this is why the launch for her was “extremely gratifying”.

She described heart disease and stroke as another pandemic that needed to be tackled with the same energy and innovation used in the fight against the Covid-19 pandemic.

Prof Pamela Naidoo, Heart and Stroke Foundation South Africa CEO, said the clinic was the first of its kind in the province and in South Africa.

“Our trained nurses are ready to conduct health-risk assessments (HRA) of members of the communities they work in,” she said, “and provide them with helpful information and advice on how to manage their health. Those individuals at risk will be referred for health care and treatment, where needed, to nearby public and private medical facilities.”

Naidoo said in the country non-communicable diseases such as heart disease, strokes and other circulatory conditions remained a burden. And the clinic would assist in educating, informing, diagnosing and referring patients where necessary. She said patients will be educated and informed on the “importance of knowing their numbers” by testing their blood pressure, blood sugar levels, cholesterol and body mass index (BMI).

Prof Ntobeko Ntuli, head of Medicine at UCTs Medical School, said he was delighted to be part of the launch, as it was “using outreach as way to access and increase our relevance” to communities.

He said the programme was important and would have direct health benefits for beneficiaries. “This programme will also make available health professionals in remote areas they could not have been able to go to,” Ntuli said. “It does not only help in cardiovascular diseases, but it will have long term results in improving health care in our society.”

We live in a world where facts and fiction get blurred
In times of uncertainty you need journalism you can trust. For only R75 per month, you have access to a world of in-depth analyses, investigative journalism, top opinions and a range of features. Journalism strengthens democracy. Invest in the future today.
Subscribe to News24
Next on News24
Leaders seek answers

Lucky Friday for 3 Daily Lotto players!
Full list of lottery results
Lockdown For
DAYS
HRS
MINS
Voting Booth
As South Africa faces down the third Covid-19 wave, how are you keeping your family safe ?
Please select an option Oops! Something went wrong, please try again later.
Staying at home, isolating and being careful
18% - 382 votes
Sanitising and wearing masks when we go out
69% - 1471 votes
Going on as usual, we're not afraid of the virus
13% - 266 votes
Previous Results
Podcasts
PODCAST | Too Many Enemies: Episode 1 - the assassination of billionaire Wandile Bozwana