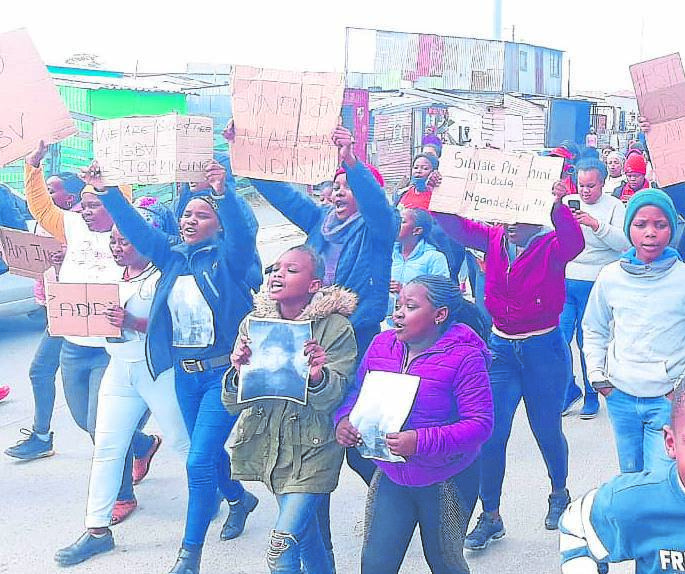 Angry residents marched to Siqalo informal settlement in demand of justice for the late Zandile Mdutyini.

Emotions ran high in Kosovo informal settlement, in Philippi, on Sunday 13 September, when a group of angry residents marched to a house of a man suspected of killing his girlfriend and dumping her corpse in the bush.

The body of Zandile Mdutyini (22) was found by police stashed in a wheelie bin on Tuesday 25 August after she went missing a few weeks prior. She was last seen by her family on Sunday 9 August while visiting her boyfriend in Siqalo informal settlement. Efforts to trace her drew blank and she was eventually found by police after more than two weeks.

The discovery has angered the residents.

On Sunday, they destroyed his shack and called for justice on behalf of the deceased believed to have been about nine months pregnant at the time of her death.

The march coordinator, Phakama Masangu, described Zandile’s death as dreadful. She urged all women in Samora Machel to stand up against gender-based violence (GBV). “We are saying enough is enough. As women we feel as if we are not safe among men. What happened to Zandile can happen to any of us tomorrow. We want justice to take its course against the perpetrator,” said Masangu.

She added that it was not the first time a similar incident occurred in the area. “We are appealing to men to stop abusing women and children,” she said.

Mdutyini’s sister, Thandokazi, said the family was heartbroken. She said immediately after hearing that her sister did not return home for a couple of days, she got worried. “I knew that there was something wrong. I went to Mitchell’s Plain hospital to look for her, but I didn’t find her,” she said.

Thandokazi said on Saturday 5 September her mother went to Philippi police station to report that Zandile is missing and that was when they found that her body was discovered in a wheelie bin and dumped in the forest.

She said the family is struggling to bury Zandile.

“We don’t have a burial society. I’m working on the farm and my mother is unemployed. So, we are surviving on my children’s grant,” she said, adding that they would love to bury her in Engcobo, Eastern Cape. However, as things stand they are not sure of the funeral arrangements.

Provincial police spokesperson Brig Novela Potelwa said no arrest has yet been made but the police are making a “steady progress” with their investigations.