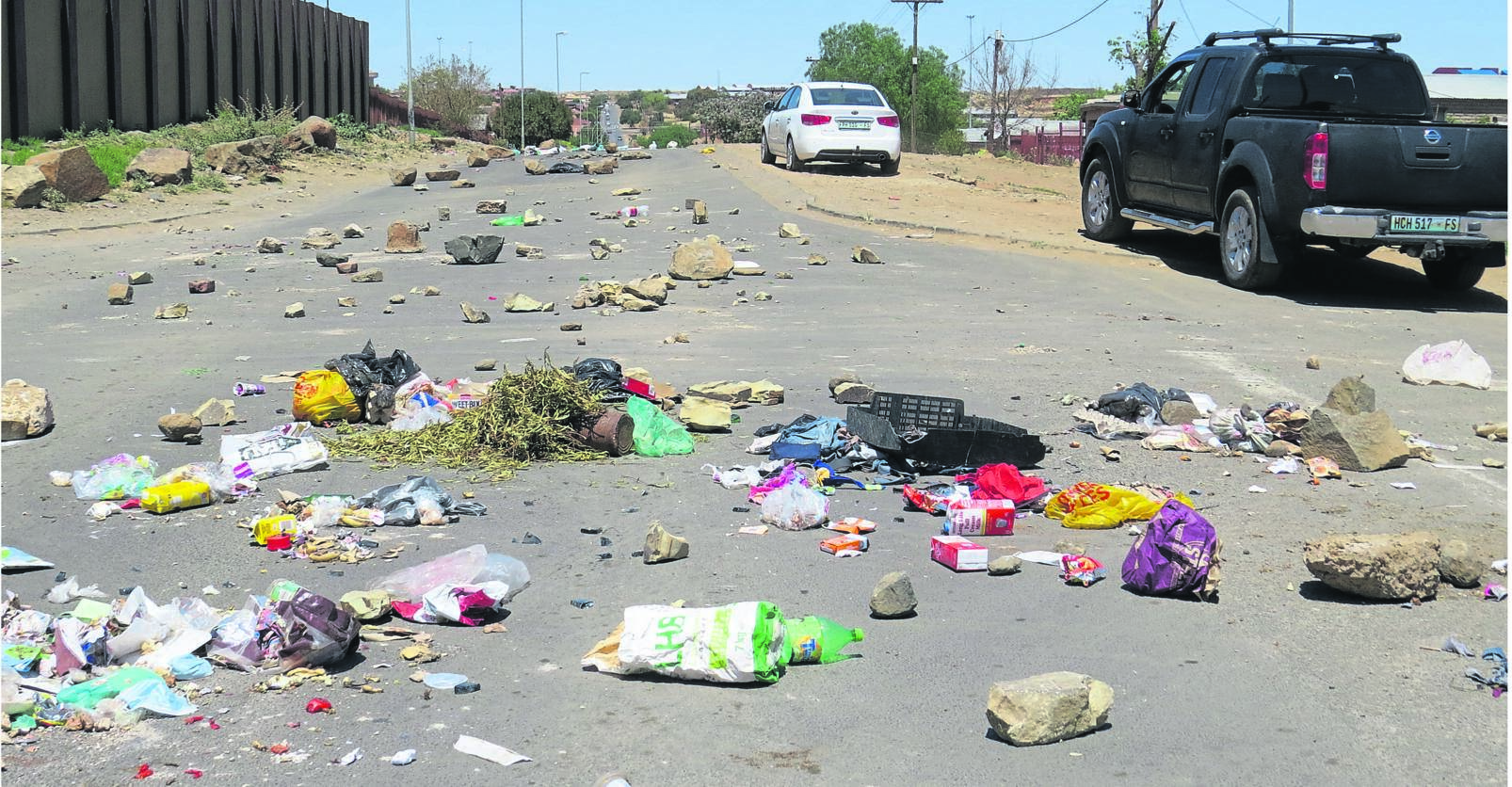 Uncollected rotten waste and stones were utilised to barricade Khomo Street which runs through the Sejake settlement in Bloemfontein. Photos: Teboho Setena

Disgruntled residents of the Sejake settlement, which forms part of Ward 15 in Bloemfontein, are demanding the immediate removal of ward councillor Pulane Mohibi­du, a candidate of the ANC.

To make their voices heard, dozens of unhappy youth took to the streets on Friday (16/10).

They barricaded Khomo Street with stones, burning tyres and garbage, making it impossible for motorists to pass, and gathered at the M10 Road, which remains incomplete since construction started two years ago.

Although they disrupted traffic, they refrained from looting shops.

A handful of Public Order Police members were on guard while the youth were protesting.

The crowd cited the ward councillor’s style of administration as main reason for demanding her immediate removal.

They alleged the ad­ministration was not participatory and transparent, for residents to know what developments were being planned for their ward.

“She prefers delegating to ward committee members instead of being the key link between the council and residents herself,” said one resident.

Their haste for Mohibidu to be removed comes in spite of the local government election, which will enable them to vote for a new candidate, being scheduled for 2021. The election is likely to be held between 3 August and 3 November next year.

According to residents, the election is too far away to effect relief.

A petition containing their grievances has been presented to Mxolisi Siyon­zana, speaker of the Mangaung Metro council.

Mohibidu would not comment, as the matter was being handled by the speaker’s office.

Residents revealed that Friday’s protest followed a series of unsuccessful consul­tative meetings with the Mangaung Metro to address a range of grave concerns regarding affairs in the ward and development projects that are meant to improve living conditions, specifically in the Sejake settlement.

The most recent of these meetings was had been held on Tuesday (13/10).

The meeting was addressed by one of the ward committee members about possible employment for five people in the road construction project which abruptly came to a halt in 2018.

The meeting collapsed after residents objected to the offer of these jobs, which would be temporary.

Initially, 15 people were employed to work at the company assigned to complete the construction of the M10 Road, which runs through the Sejake settlement.

Main concerns raised in the petition are poor service delivery, as well as allegations of prioritising jobs and internship programmes for friends, and based on political affiliation.

“Many of our young people are qualified and skilled, but their potential has been ignored because of personal agendas of these leaders we elected,” said one youth.

“During their election campaigns, they go door-to-door, asking for us to vote irrespective of political affiliation, but now we are outcasts.”