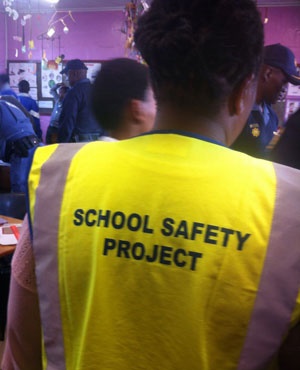 Plans to secure the safety of Hangberg learners are underway following the horrific shooting of a man (46) in front of learners at Hangberg Pre-primary School last month.

The victim, reportedly a parent of one of the learners, was shot in the head outside the school’s gate during the morning school drop-off period on Wednesday 10 February. The man later succumbed to his wounds.

Anthony Chemaly, chair of the Hout Bay CPF, says since the meeting, a risk assessment of the school safety action plan has been completed and an inspection of the premises has been conducted to identify further improvements to the security framework.

In addition, HBNW donated two two-way radios – linked to the Hout Bay Watchcon Control Centre, the police, emergency services and fire services – to the school to allow for quick communication.

“To increase visible policing, the police agreed to do check-ins at the school grounds,” Chemaly says.

Last week, Chemaly met with Rob Quintas, councillor for ward 74, who, in turn, has reached out to Western Cape provincial minister of education, Debbie Schäfer and the City of Cape Town’s Mayco member for transport, Felicity Purchase, requesting a meeting to discuss support.

According to Chemaly, they hope to engage with the City and national government to possibly assist in providing some resources to implement CCTV infrastructure as well as install a rear exit gate to allow for the safe evacuation of the school learners in an emergency. “At present, there is no extra budget available to assist with CCTV infrastructure from the City, but we will request financial support for this and the gate, regardless, to hopefully have consideration in the next financial year,” he adds.

Chemaly says the CPF and HBNW have discussed the roll-out of a potential project, called “Centres of Safety”, at schools in Hout Bay, starting with higher-risk schools in Hangberg and Imizamo Yethu.

We live in a world where facts and fiction get blurred
In times of uncertainty you need journalism you can trust. For only R75 per month, you have access to a world of in-depth analyses, investigative journalism, top opinions and a range of features. Journalism strengthens democracy. Invest in the future today.
Subscribe to News24
Next on News24
Seven arrested in beating of police officer

Every day ke payday for Daily Lotto players
Full list of lottery results
Lockdown For
DAYS
HRS
MINS
Voting Booth
Would you choose to continue working from home after the coronavirus lockdown if given the option?
Please select an option Oops! Something went wrong, please try again later.
Yes, it's much better for me
40% - 6935 votes
No ways! I can't wait to get back to the office
12% - 2028 votes
A mixture of both would suit me best
48% - 8342 votes
Previous Results
Podcasts
PODCAST | MISSING MATTHEW EPISODE 3: Decades of false starts add to a family's despair