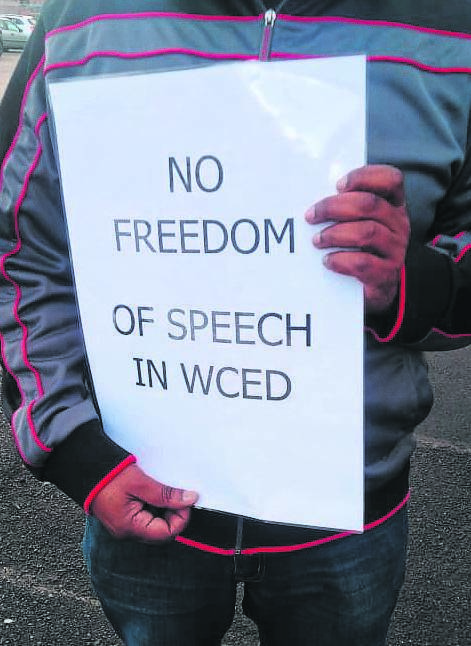 Neumann came under the public spotlight after writing an open letter to the government, along with three other school principals, regarding the return to school during the Covid-19 pandemic.

The letter wished to encourage officials to close schools ahead of the peak of the pandemic and reimagine the school year away from the calendar year in order to keep the public safe from the virus and enable learners to complete the school year.

The letter reportedly irked WCED and led to charges being laid against Neumann.

At first, it seemed the matter had died down. However, in recent weeks, learners from the Heathfield school have begun to protest once more, calling for charges against Neumann to be dropped. The protests intensified last week, with learners protesting on Friday 10.

Approached for comment, Bronagh Hammond, spokesperson for WCED, said: “Mr Neumann has been charged with six charges of alleged misconduct in terms of the Employment of Educators Act, 76 of 1998. The matter is sub judice, the contents of these charges cannot be disclosed. The charges against Mr Neumann are neither personal nor political. Mr Neumann’s actions are in contravention of the Employment of Educators Act, 76 of 1998. I can confirm that the pre-hearing was on (Monday) 28 September.”

In the meantime, the school governing body (SGB) for Heathfield has penned a letter of its own. “We, the SGB of Heathfield High, hereby want to call on the WCED to drop these ridiculous charges against our principal, Mr Wesley Neumann,” the letter reads.

It further states the SGB’s support of the principal for his years of service and contribution to education in the community.

“For 12 years, Mr Neumann has been part of the Heathfield family, and everyone can attest to the fact that he is the leader and principal who respects the role and authority of the SGB, and will always act in the best interests of our children, his staff and the greater community. As the young leader he is, with the deep-rooted principles he showed, it is evident to see that we are nurturing one of the best leaders in education this country can see. Instead of embracing these qualities, the WCED sees this as a threat and would want to get rid of these qualities at all cost.”

Referring to the letter sent to the government to close schools and a notice sent to parents before the peak of the pandemic, stating they could keep their children at home if they were uncomfortable to send them to school, the letter reads: “Our only objective was to make sure our children could return to school when it was safe to do so and the conditions of the schools were safe.”

The letter claims attempts were made to discuss the action with WCED.

“On numerous occasions, we requested a meeting with the WCED, and after numerous promises, they failed to adhere to this request.”

The hearing process is ongoing.