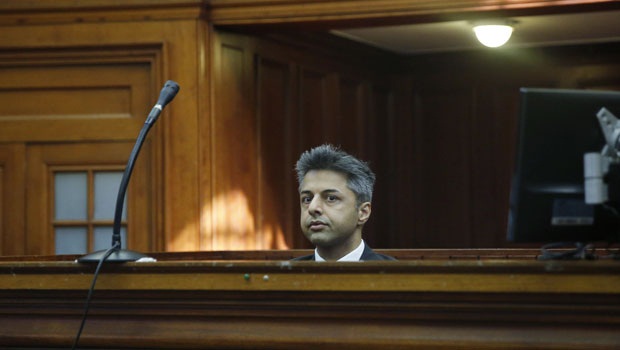 Tongo's is expected to return to court on Tuesday for his sixth day of cross-examination.

Tongo says he made his statement in 2010 in the presence of police Colonel Barkhuizen and his attorney William Da Grass.

Tongo says things happened in the manner in which he said.

The judge asks Tongo if what he is saying in court is correct and not what is in the statement.

Tongo: I can see there is a difference but things happened in the manner I am saying now.

Tongo: I'm going to repeat that some of the things I said here, I only recalled afterwards.

Van Zyl: In your police statement, you said lady went in, Dewani turned to me, asked me what's happening.Why do we have these differences, can you explain that?

Van Zyl: You said he softly inquired what happened and you explained, right?

Tongo said he tried to convey everything he received from young men to Dewani and vice versa.

Tongo: It's impossible to say who said what.

Van Zyl: You either told accused you would phone and find out what happened, or as you testified that you had already spoken to them.

Van Zyl continues to point out discrepancies in Tongo's affidavit.

#DewaniTrial Tongo says he did not tell Colonel Barkhuizen that the accused had threatened to kill him if the job was not done.

Van Zyl: What is right, what you have testified in chief or what you said in your statement?

#DewaniTrial @eNCAnews In a statement to Col. Barkhuizen, Tongo said SD threatened to kill him if the job is not done.

Tongo had commented to Van Zyl "thanks for saying I'm clever".

Tongo: Things that were said in his affidavit at the time, happened when I was in a "critical condition".

Tongo says reference in his affidavit to Dewani threatening to kill him is incorrect.

Tongo says the hitmen said they would wait for him and the couple in Gugulethu.

Tongo says Dewani wanted to know why the "thing they decided on didn't happen". He told Dewani he would get in touch with the hit men and find out.

Tongo: He and accused walked in front, business partner a little distance behind.

Tongo says it is up to Dewani him if he says it didn't happen.

Dewani seems to react to every movement in court. He looks up, then down, then around him.

Van Zyl says what he understood from Qwabe's evidence is that its not going to happen, it would happen another time.

Van Zyl: Qwabe told this court a different story,he said they struggled to get transport,you phoned him you had already left Gugs.

#DewaniTrial Judge: When did he make big eyes to you? Tongo: when we were joining the N2 and on way back from Strand.#sabcnews

Van Zyl: You were clear in your evidence in chief, you said before you rejoined the N2, accused sent you a text asking what's happening.

Tongo again disputes records concerning communications between him and Dewani.

Tongo: It's possible that I can be mistaken, could be mistaken about when communication took place.

Van Zyl says experts on both sides agree there were no calls or texts between you and accused between Gugs and Strand.

#DewaniTrial @eNCAnews Tongo rarely makes eye-contact or acknowledges Van Zyl. He stares at the judge while Van Zyl questions him

#DewaniTrial @eNCAnews Tongo: partner was right there. Traverso: So, you say the records are wrong? Tongo: It seems so, My Lady.

Van Zyl: It's common cause that such an SMS does not exist. You maintain there was one?

Tongo: There was communication.

VZ, says there's no evidence that SD sent Tongo an sms to find out what happened ? (Why the hijacking did not happen) #DewaniTrial @ANN7tv

Tongo insists that there was communication between him and Dewani.

Tongo: The fact that it doesn't appear on the record, I don't know.

Van Zyl says they couldn't find a single SMS to Tongo, before the arrived in Strand, after leaving the Cape Grace Hotel.

Murder convicted shuttle taxi driver Zola Tongo was not worried about what would happen to his minibus in the hijacking in which Anni Dewani was killed, he told the Western Cape High Court on Monday.

He said the hitmen who planned to kill Shrien Dewani's wife had agreed his VW Sharan would be abandoned in Gugulethu on 13 November 2010. Tongo, 34, was being cross-examined during Dewani's trial. Dewani denies masterminding the murder of his wife, insisting they were the victims of a hijacking.

Francois van Zyl, for Dewani, asked Tongo whether he arranged for his keys to be kept, or for the car to be locked, especially as it was a dangerous area. Tongo said he could not remember such arrangements being made.

Van Zyl drove home the point that Tongo was using his car to make a living. He asked how much income he received at the time from transporting people.

Tongo is not sure whether it was before or after contacting Monde.

Tongo says he tried to get in touch with Monde while travelling to Strand.

Van Zyl: What did you discuss?

Tongo: I wanted to know why they didn't fulfil our agreement.

Tongo: I told Monde that the men did not show up. Asked where they were. He said he did not know and would find out.

Tongo: I contacted Monde to tell him that the men were not at the agreed place.

Tongo says he had a meeting with the hitmen that afternoon to discuss the meeting place.

Tongo back on the stand says when he got to Gugulethu he was surprised that Qwabe and Mngeni were not there as agreed.

The court adjourns for lunch.

Go to top
We live in a world where facts and fiction get blurred
In times of uncertainty you need journalism you can trust. For only R75 per month, you have access to a world of in-depth analyses, investigative journalism, top opinions and a range of features. Journalism strengthens democracy. Invest in the future today.
Subscribe to News24
Next on News24
LIVE | Govt to take decision today on possibility of new restrictions for Covid-19 hotspots