ANALYSIS: Lack of water not a laughing matter now 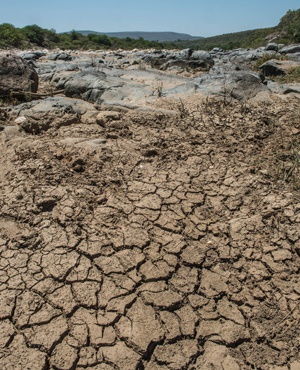 A view taken on November 9, 2015 shows the dried up Mfolozi River in Ulundi, 159 km North of Durban in KwaZulu-Natal, as a sever drought affects South Africa. (AFP, file)

When I was a junior reporter at my first newspaper job in Durban, I came back from covering a water conference with what I thought was a really good story.

"They say South Africa is going to run out of water," I told the news editors.

They spun around, eyes trained on me and I could almost hear the headlines they were already writing in their minds.

They fell about laughing.

Last week I wrote a story based on the National Water and Sanitation Master Plan report: South Africa was going to run out of water in 2030.

No one fell about laughing this time. What had been dismissed as a non-story in newsrooms 35 years ago, had become a frightening reality that people now understood and accepted.

So what had changed?

And then there was the advent of Day Zero and the stark reality that taps in Cape Town, South Africa's second-largest economic hub, might be switched off because the city was running out of water.

Not just local newsrooms, but the international media too were all over the story. It was a sort of sci-fi story made real.

Since the early 80s, there have been many water augmentation schemes built, from the Lesotho Highlands Project to the Berg River dam in the Western Cape.

In spite of the investment in water infrastructure, the 2030 date has not changed. The major reason has to be our huge increase in water demand, with rapidly-expanding cities, economic, industrial and population growth, and rising living standards.

"This water scarcity is being exacerbated by escalating demand due to economic and population growth, urbanisation and rising standards of living, unsustainable use and high levels of wastage and loss, and increasing pollution which renders water not fit for use," reads the draft National Water and Sanitation Master Plan.

Looking back, one can speculate on what we could have done better, or differently, to push that 2030 date further away.

As a layperson, it seems to me that we never really got on top of four issues which, taken together, could have made a significant difference in becoming more water secure.

The first was that we focused mainly on conventional water sources, and did not exploit others in any significant way, such as the reuse of wastewater on a national scale.

Other water-stressed countries like Namibia, have been reusing wastewater for decades. Rainwater harvesting is another example.

Why wasn't there a national programme to encourage collecting rain from rooftops on a large and small scale? Until fairly recently, some municipal by-laws did not even allow rainwater tanks.

The second issue is that we have not done very well in looking after our "environmental infrastructure" - all the natural parts of our water systems.

Many of our water catchment areas are still full of water-guzzling aliens, or are degraded from over-grazing. More than half our wetlands - water sponges that release water in times of drought - have been destroyed and much of those that are left are degraded.

We have acid mine drainage, many of our rivers are polluted with industrial pollutants and pesticides and fertilisers from agriculture.

According to the draft National Water and Sanitation Master Plan, due to come before Cabinet in May, as much as 56% of municipal sewerage systems do not work properly, with 11% totally dysfunctional, so poorly-treated sewage effluent is being discharged into rivers.

The third issue is that South Africa has not embraced the kind of agriculture that reduces water usage.  It has started to creep in, with measures like drip irrigation and "no till" practices that keep moisture in the soil, but as a sector that uses 61% of our water resources, agriculture needs to do a lot more.

The fourth issue is water demand management. For decades we have heard the authorities and NGOs saying that the cheapest way of finding more water is to cut demand, but only in times of crisis do we really cut demand.

It is quite staggering to remember that just a few months ago people in drought-stricken Cape Town were still allowed to fill their swimming pools with tap water.

Fortunately, while the National Water and Sanitation Master Plan makes no bones that we are facing a national water crisis, it does say there is a way out. It is a plan, rather than a policy, so has details of what needs to be done by whom and by when, to avoid a type of countrywide "2030 Day Zero" scenario.

Averting a national water crisis presupposes, of course, that we have well-functioning government departments.

The revelations in Parliament last week of the mess and corruption in the Department of Water and Sanitation were shocking.

If we don't get the national water department sorted out soon, no amount of policies and plans will avert a water crisis.

We live in a world where facts and fiction get blurred
In times of uncertainty you need journalism you can trust. For only R75 per month, you have access to a world of in-depth analyses, investigative journalism, top opinions and a range of features. Journalism strengthens democracy. Invest in the future today.
Subscribe to News24
Related Links
South Africa could run out of water by 2030 – govt draft plan
SEE: City of Cape Town's planned hikes for water, sanitation, electricity and rates
Cape Town water consumption drops by 43 million litres
Next on News24
LIVE | Covid-19 in SA: Death toll hits 49 941 as cases rise to 1 512 225