Limpopo police have found a man, who reportedly went missing in August, hanging from a tree in the mountains near his village.

When 25-year-old Mhlori Maluleke, from Gandlanani village near Giyani, was found, his body was in a stage of decomposition, said Colonel Moatshe Ngoepe.

"The cause of death will still be determined by the ongoing police investigations, including the post-mortem examination," he said.

After he was reported missing, members of the community "went on [a] rampage", said Ngoepe.

They torched properties belonging to a businessman and two of his employees, after accusing them of being responsible for Maluleke’s disappearance. 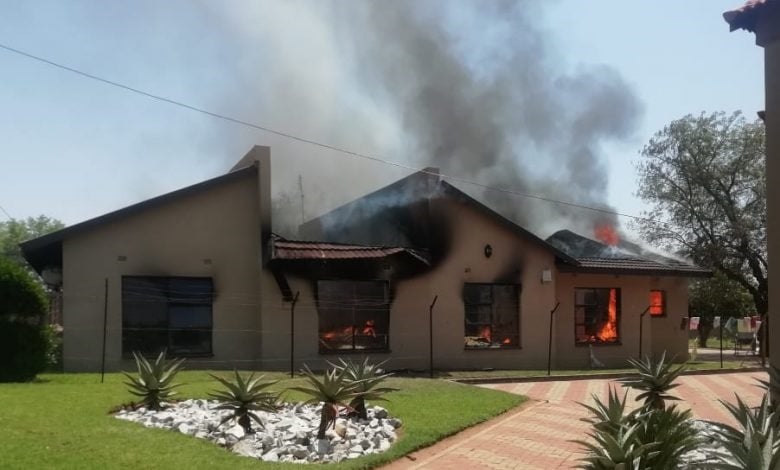 An angry mob of people set fire to properties and cars after a sangoma accused a businessman and his employees of involvement in the disappearance of the 25-year-old man. (Limpopo SAPS)

"On that day, a group of community members cornered one of the businessman's employees, aged 52, and thereafter gathered at the local soccer ground.

The residents allegedly consulted a sangoma, who pointed out the three men as the ones responsible for the disappearance of the Maluleke.

Members of public assaulted, burnt and dragged the man to the house belonging to the businessman's mother.

They then torched the property and three vehicles. The man later died in hospital.

"Shortly after that, they moved to the businessman’s residence and pelted his double-storey house with stones, damaging the electric fence and some property," said Ngoepe.

The community then torched a home belonging to a 51-year-old employee.

Twenty suspects - 19 men and one woman - were arrested and appeared in the Giyani Magistrate’s Court on charges of murder, arson, malicious damage to property and public violence.

We live in a world where facts and fiction get blurred
In times of uncertainty you need journalism you can trust. For 14 free days, you can have access to a world of in-depth analyses, investigative journalism, top opinions and a range of features. Journalism strengthens democracy. Invest in the future today. Thereafter you will be billed R75 per month. You can cancel anytime and if you cancel within 14 days you won't be billed.
Subscribe to News24
Related Links
Limpopo cop, 15 others arrested for drugs and illicit cigarettes
Cash-in-transit robbers sentenced to a combined 258 years in jail
One person injured as angry mob torches 2 houses, 4 cars in Limpopo
Next on News24
LIVE | Covid-19 in SA: 6 375 new cases

Here are the Daily Lotto numbers
Full list of lottery results
Voting Booth
Have you and your family been counted in Census 2022?
Please select an option Oops! Something went wrong, please try again later.
Yes
47% - 1073 votes
No
53% - 1202 votes
Previous Results
Podcasts
PODCAST | The Story: How one incident at Stellenbosch University sheds light on deeper issues