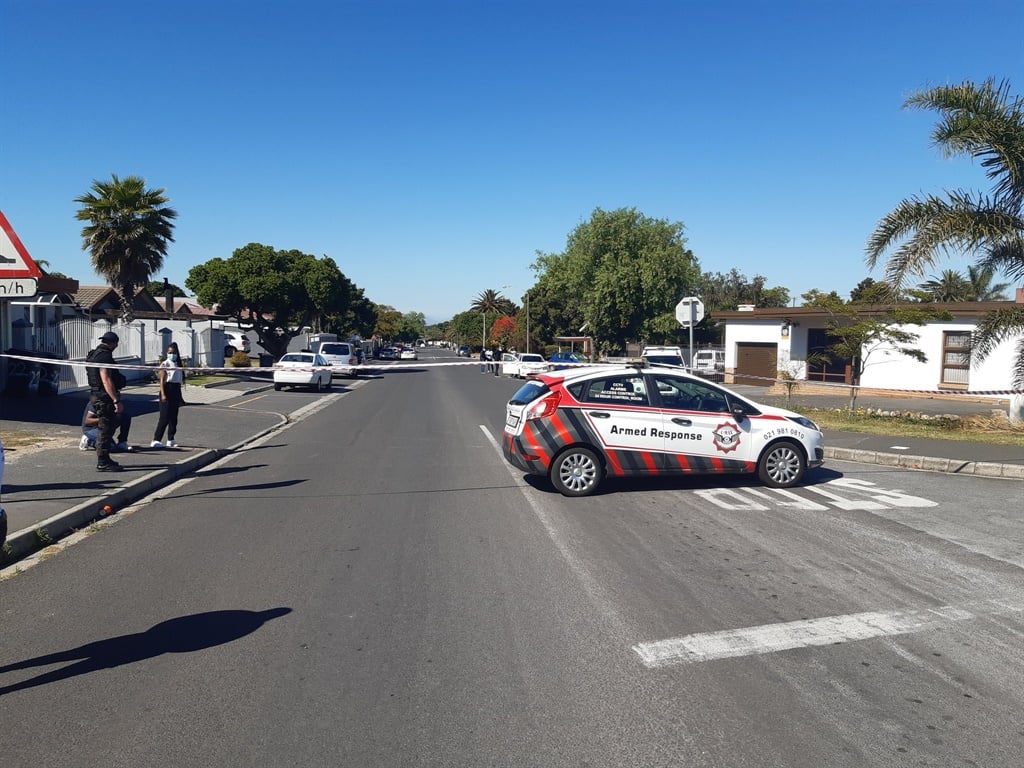 A quieter morning on Tuesday in the road leading to Brackenfell High School following violent scenes the day before.
PHOTO: Tammy Petersen, News24

UPDATE: An urgent bid by the school governing body (SGB) of Brackenfell High School, to interdict the EFF from protesting outside its school grounds, failed on Tuesday and will only be heard next week.

The EFF reportedly gave an undertaking not to disrupt school activities in the interim.

The urgent application for an interdict was brought before the Western Cape High Court on Tuesday afternoon and presided over by Judge Siraj Desai.

The SGB's application sought to interdict the EFF from protesting against alleged racism, in four roads leading to the school, including Brackenfell Boulevard, Okavango Road, Frans Conradie Drive and Kruis Road, IOL reported.

School governing body chairperson Guillaume Smit confirmed to News24 the court did not grant their urgent interdict bid on Tuesday.

The matter was postponed and the rest of their application will be heard on Monday, with the EFF given until Friday to file papers to oppose the application.

According to IOL, Desai said the right to free assembly was fundamental.

"The issue is contentious as is. If the school was segregated, it is so repugnant that the protest is legitimate," Desai was quoted as saying.

The court also sought the undertaking from the EFF that exams and learning would not be interrupted in the interim, which the party agreed to, Smit said.

"We are thankful that the judge heard our primary concern, and we are grateful that the children's ability to write exams can continue," Smit said.

News24 has reached out for comment from the EFF, and will include it once received.

The following story was published earlier on Tuesday on News24.

Brackenfell High School is understood to have applied for an interdict against the EFF in the Western Cape after violent clashes broke out when angry community members confronted protesters near the school on Monday.

There wasn't a sign of a red beret on Tuesday morning. Locals stood on the corner of Rogland Street, which had been cordoned off, and private security officials and police were out in their numbers.

A group of around 20 parents gathered on one street corner on Tuesday morning.

The EFF in the Western Cape attempted to stage a protest to demand that two teachers who attended a private event, which was allegedly attended by white pupils only, be suspended from the school.

The private event was attended by a number of white Grade 12 pupils after the school cancelled its official matric ball due to Covid-19.

Rogland Street, in which #BrackenfellHigh is situated, has been closed on both sides. A group of about 20 parents are gathered on one street corner. All quiet at the moment. @TeamNews24 pic.twitter.com/rWaWci0QhR

Winde maintained that it was important for pupils to be given the opportunity to complete their school year without "disruptions".

"My message is to the EFF: You may not come and disrupt this community. You need to stay out. We need to keep the politics away from this school now," he said.

The violence on Monday was "absolutely unacceptable", Winde added.

"Here were citizens here busy attacking each other. It cannot happen and that is why I need to see arrests." 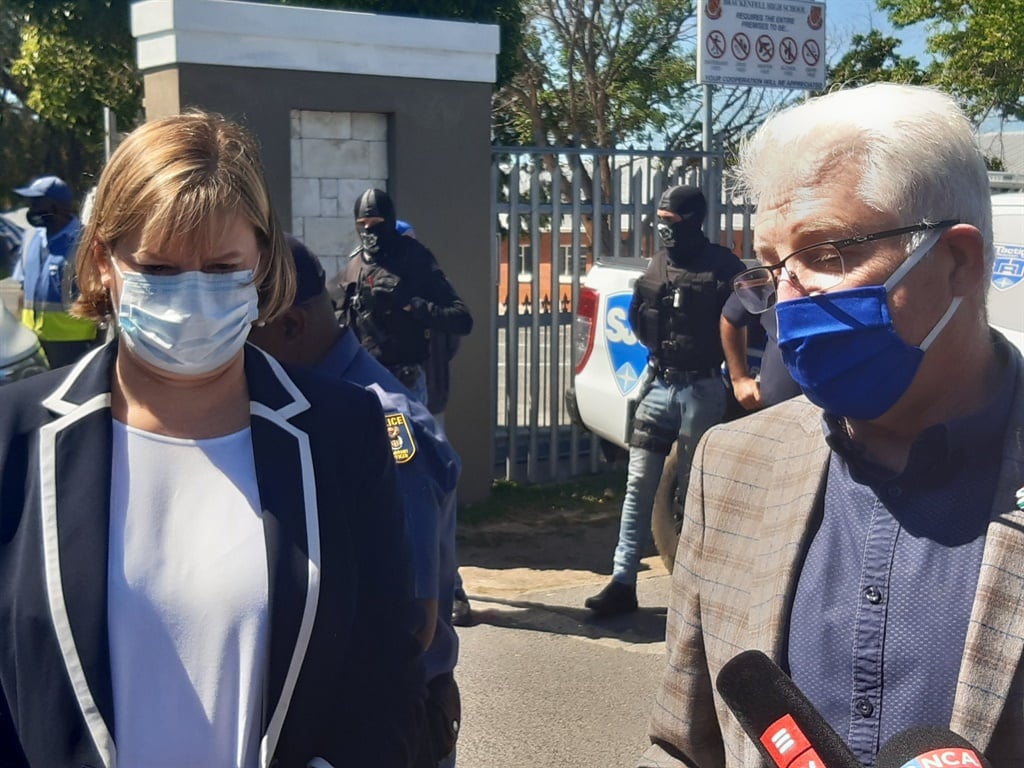 On Monday, police confirmed that a public violence case was opened against a 39-year-old man after a shot was fired in the air, reportedly from a "replica air gun".

Winde said violence "from any side" would not be tolerated and added that charges would be laid.

Schäfer said she had asked for a detailed written report into the event at the centre of the furore, although indications were that it was a private party that "wasn't discriminated on the basis of race" and that not all white pupils had been invited.

Premier Alan Winde confirms that #BrackenfellHigh has applied for an interdict against the EFF. "We're asking now for the EFF to stay away from outside of the school, because what happens is you end up with confrontations and illegal gatherings like we saw yesterday." @TeamNews24 pic.twitter.com/yhI4YD8VSn

On Tuesday, ANC caucus leader Xolani Sotashe stood across the road from the group of locals and held a sign which read: "White supremacy must be confronted and defeated".

"What triggered me to come was to see a certain group of people urinating on our democracy. We must all agree what happened here yesterday is disgraceful. It's distasteful and it must be condemned," he said.

"There is no way that we will keep quiet because we fear when we come out and speak about these issues, some people will feel uncomfortable. We're coming a long way as a country. We are coming from a very painful past."

He added that the Western Cape and Cape Town were not republics.

It is part of South Africa. We have one republic, one government under President [Cyril] Ramaphosa. Our coming here as the ANC is to remind those who did what they did yesterday that we know what happened in the past. We don't want to go back there.

"Don't bring back the bad memories. We are here to say that as a nation, let's embrace each other."

We live in a world where facts and fiction get blurred
In times of uncertainty you need journalism you can trust. For only R75 per month, you have access to a world of in-depth analyses, investigative journalism, top opinions and a range of features. Journalism strengthens democracy. Invest in the future today.
Subscribe to News24
Related Links
Ramaphosa calls for 'restraint' after Brackenfell parents trade blows with EFF supporters
Brackenfell High: WCED slams violence, won't take action against teachers who attended event
PICS | 'The event was open for everyone,' Brackenfell resident says as community clashes with EFF
Next on News24
LIVE | Covid-19 in SA: Death toll at 86 967 as cases rise by 2 261

3 bag the jackpot in the Daily Lotto
Full list of lottery results
Lockdown For
DAYS
HRS
MINS
Voting Booth
Have you ever purchased a fake luxury/designer item?
Please select an option Oops! Something went wrong, please try again later.
Yes, I believed it was authentic
7% - 182 votes
Yes, I didn't want to spend that much money on the original item
21% - 550 votes
No, I always shop at reputable stores
14% - 371 votes
No, I don't wear designer clothing
59% - 1573 votes
Previous Results
Podcasts
PODCAST | My Only Story: The boys' school, the water polo teacher and the creepy WhatsApp messages