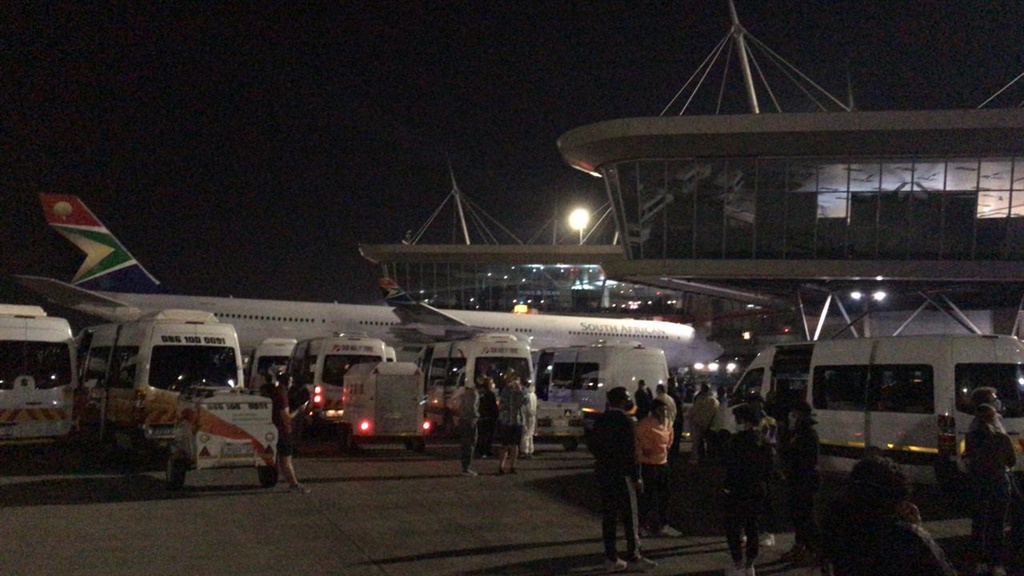 Passengers who were repatriated from the US have been on the tarmac at OR Tambo International for hours. (Supplied)

About 200 people who took a flight from Washington DC in the US on Sunday night, and arrived at OR Tambo International on Monday afternoon, are stuck on the airport's tarmac with nowhere to go.

The group of South Africans arrived in the country as part of a coronavirus repatriation process, but now have no clarity on what to do next.

According to some of the individuals, who have reached out to News24, the passengers landed before 17:00 and have been kept in minibuses on the tarmac with their belongings, with no idea on where they will be taken in order to carry out their 14 days of quarantine.

ALSO READ | 275 South Africans repatriated from US, hundreds more to arrive this week

Among them was multiple South African surfing champion Jordy Smith and his wife.

The champ had been training for the forthcoming global surf tour, in Hawaii, when the global Covid-19 pandemic struck. He told News24 about how the journey had begun chaotically in Washington.

"There was no confirmation about getting on to the actual flight. The department and the SAA didn't actually issue tickets - so no one knew who was on the plane and who wasn't."

With no ticket - there would be no flight, even if people had paid for tickets. They waited for around 10 hours, while this confusion and anxiety reigned. Smith said he and his wife, Lyndall, sighed with relief when informed they were on the flight, just 20 minutes before boarding.

"I felt extremely sorry for some people who got left behind," he said.

"On the plane, they were serving us in hazmat suits. The first 3-4 rows were empty."

This made the couple doubly sad for those left behind.

"That was pretty bad, I thought," said Smith.

They eventually arrived in Johannesburg, at around 16:35 - at OR Tambo International Airport.

"We were taken off the aeroplane - everyone got tested while on the plane, checked out temperatures, etc."

Their luggage was loaded into kombis - only 10 passengers per 20-seater vehicle. All passengers were required to sign acknowledgement that they would be quarantined for 14 days - before leaving the US.

"We were told we were going to a government facility to be put into quarantine for 14 days. And now we've been sitting on the tarmac for about five hours now."

"We're safe, but it's freezing," the surf champ said shortly before 21h30.

"We have been sitting on the ground here for plus minus five hours and it's freezing cold. There are about 270 South Africans all just standing around with nowhere to go," he said.

Smith said officials on the ground seemed to be clueless about what was happening and the passengers were informed to hang tight while the matter was resolved.

"It's frustrating not having any correspondence with anyone. At the moment everyone is sitting in limbo..." Another South African on the flight, Matthew Kalil, told News24: "It's turning into a mini-party, as it would with South Africans!

"We've moved through the phase of being gatvol. It's cold, no food, no water - it's really not the best place to be.

"No one really knows what's going on ... just a whole lot of us wandering around on the tarmac, like lost farts," Kalil said.

He felt for an elderly woman - who just wanted "a warm meal and a warm space", after the exhausting ordeal.

Kalil, who wanted to return home to Cape Town, told News24 that the group was set to be housed at a hotel for quarantine.

He said, however, that the group found out only after landing that there was an issue with an agreement between the government and the hotel, meaning the group had nowhere to go.

"People are trying to remain in good spirits," he said, "but I don't know how long this will last. We've been here since 17:00 and all I really want is some rest and some food."

He said while they were allowed to enter the airport terminal, airport staff had allowed the group to use toilet facilities. Kalil said he was also concerned about where the group would be taken, after hearing reports of unsatisfactory housing arrangements made for those in quarantine.

At around 22:10, the passengers were asked to return to their vehicles, and began leaving the airport, but had not been told where they were headed.

Minister of Public Works Patricia de Lille's spokesperson Zara Nicholson told News24 the department was aware of the situation at the airport, but there were reasons for it.

Nicholson said they were receiving conflicting reports that some passengers who had landed have been transported, but others were still at the tarmac.

"The problem is that we keep getting notified on the day that people are arriving and that's against the agreement supposed to be in place from a national joint committee, which is that Public Works must get 72 hours notice, so that we can procure and allocate sites properly," she said.

She added that the procurement process was difficult to conduct if the department was not given enough time.

"It happened yesterday (Sunday) and it happened again today (Monday), where we get told at 22:00 that people are landing. Sometimes it's like an hour's notice, so we need to follow and allocate sites within our processes, but we can't do that if we are told on the day. We are aware (of the situation)," Nicholson said.

We live in a world where facts and fiction get blurred
In times of uncertainty you need journalism you can trust. For 14 free days, you can have access to a world of in-depth analyses, investigative journalism, top opinions and a range of features. Journalism strengthens democracy. Invest in the future today. Thereafter you will be billed R75 per month. You can cancel anytime and if you cancel within 14 days you won't be billed.
Subscribe to News24
Related Links
275 South Africans repatriated from US, hundreds more to arrive this week
German tourists stuck in SA to be repatriated after their govt intervenes
Wuhan repatriation: 122 South Africans will be continually tested for Covid-19 - report
Next on News24
BREAKING NEWS LIVE | Hawks arrest 11 armed suspects at OR Tambo International Airport

Read more on:
or tambo internationallockdown