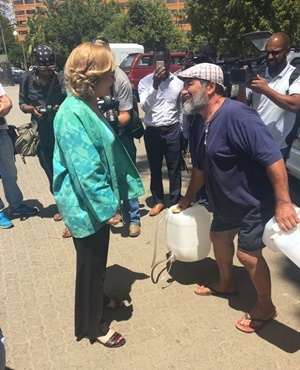 Cape Town - Day Zero - when the taps run dry in Cape Town - has been moved back yet again, the city announced on Tuesday.

The push-back was attributed to Groenland water reaching Steenbras Upper Dam, but Neilson warned that the slight increase in dam levels would be reversed if water consumption increased.

Water consumption averaged 523 megalitres per day (MLD) which, although significantly better that the 1 130MLD in 2014, was way off the target of 450MLD.

"We anticipate that Day Zero could move back into June again once the Groenland transfer has been completed, unless we are able to meet the 450 MLD collective water usage target. Therefore, it is imperative that we reach this target to make it through to the winter rains," said Neilson.

City residents are encouraged to continue to limit water use to less than 50l per day to avoid Day Zero.

Day Zero was previously set at June 4 and many retail stores have already placed limits on how much bottled water consumers may purchase at a time.

Signs of panic have also been seen at the Newlands spring recently, where there was fight over the collection of water, resulting in one arrest.

The City has since rerouted the water to ease the congestion at the facility.

The City indicated that its progress - in terms of providing alternative water sources through desalination, recycling and ground water - is 62% complete.

We live in a world where facts and fiction get blurred
In times of uncertainty you need journalism you can trust. For only R75 per month, you have access to a world of in-depth analyses, investigative journalism, top opinions and a range of features. Journalism strengthens democracy. Invest in the future today.
Subscribe to News24
Related Links
Cape Town should serve as a wake up call for managing water in South Africa
Next on News24
LIVE | Covid-19 in SA: Cases rise by 3 520 as death toll goes up by 10

Super start to the weekend for 3 Daily Lotto players!
Full list of lottery results
Lockdown For
DAYS
HRS
MINS
Voting Booth
Matric results are out! Are you happy with your child's result?
Please select an option Oops! Something went wrong, please try again later.
No, the pandemic really messed up their ability to focus
35% - 102 votes
Yes, they did well given the circumstances
65% - 192 votes
Previous Results
Podcasts
LISTEN | The Inge Lotz Story - a miscarriage of justice