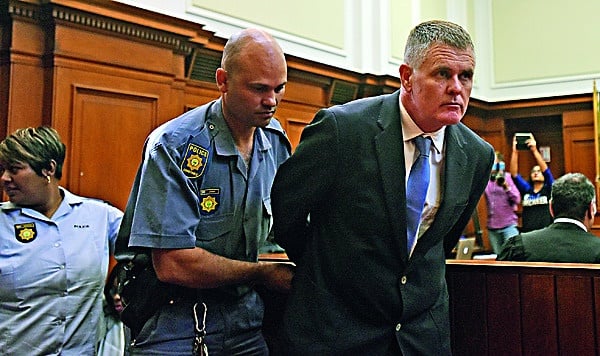 The court which found former estate agent Jason Rohde guilty of murdering his wife Susan and staging her suicide was "mentally cruel" in an "unfair" trial, according to his application for leave to appeal his convictions and sentence.

"During the trial, the court made various rulings, issued orders, acted or omitted to act and/or conducted itself in a manner that (individually and cumulatively) had the effect of constituting an infringement and a violation of the accused's right to a fair trial," Rohde's attorneys submitted in the application.

On February 27, Judge Gayaat Salie-Hlophe sentenced Rohde to 18 years in prison for Susan's murder, and five years for staging a suicide. Three of the five years were ordered to run concurrently, meaning Rohde would have to serve an effective 20 years in jail.

Earlier on Tuesday, the application for leave to appeal was filed in the Western Cape High Court.

According to the submissions, the court was unfair to Rohde, believed witnesses that should not have been believed, dismissed an expert who could have provided valuable insight in Rohde's defence, and may even have exceeded the recommended sentence.

The attorneys submitted that Salie-Hlophe came to her finding - that Susan Rohde was murdered by Jason while they were at an estate agents' conference at Spier Wine estate and that he staged her suicide - without any help from an expert medical assessor.

Susan was found dead at the wine estate in Stellenbosch on July 24, 2016. Rohde pleaded not guilty to murder, submitting instead that his wife had used a curling iron cord to hang herself from the bathroom door after a fraught evening.

The attorneys said Rohde was treated unfairly when he became ill, even though he had always been punctual and co-operative.

He was hauled out of a medical facility and kept in jail for a night at Salie-Hlophe's orders, for not arriving at court, even though his psychiatrist had testified that he was on intravenous medication for severe depression while out on bail.

The court did not check whether it would be good for his health to go to court in that state, and allegedly carried out this bail violation arrest in terms of an invalid warrant, Rohde's legal team alleged.

"By acting as aforesaid, the court conducted itself towards the accused in a manner that was degrading, immensely intimidating, humiliating, totally unsympathetic and mentally cruel," the application read.

They said this was in contrast to the treatment of State pathologist Dr Akmal Coetzee-Khan, who became ill during the trial and was absent from court for weeks.

Rohde's lawyer said that Rohde was treated as guilty instead of innocent until proven otherwise, and accused the court of curtailing or interrupting legitimate cross-examination and taking into account information that was not presented to the court, but found on the internet.

The court also allegedly became subjectively involved in the trial, the papers continued.

The papers alleged that the court may already have made up its mind before closing arguments were presented.

The papers alleged that the court may already have made up its mind before closing arguments were presented. This was based on the fact that 254 pages of typed pages for the judgment and a condensed version of 60 pages were made available less than 18 hours after closing arguments had been presented on behalf of the accused on November 7, 2018.

Rohde's guilty verdict was handed down on November 8, 2018.

They also submitted that Rohde's sentence was "overtly subjective, cruel and constituted a personal diatribe against and an attack on the accused", based on "supposition and conjecture".

It should have imposed a sentence of less than 15 years, considering that the case had serious adverse financial and other implications for his business and family, and that the case will always haunt him.

"The sentence imposed by the court is an extremely lengthy, harsh and severe one," the application read.

The parties have to wait to be allocated a date for the appeal, if successful.

We live in a world where facts and fiction get blurred
In times of uncertainty you need journalism you can trust. For only R75 per month, you have access to a world of in-depth analyses, investigative journalism, top opinions and a range of features. Journalism strengthens democracy. Invest in the future today.
Subscribe to News24
Related Links
The Stellenbosch 'spell': Meet the detectives who secured the Van Breda, Rohde and Cornelius...
Jason Rohde sentenced to effective 20 years in jail
Jason Rohde found guilty of murdering his wife
Next on News24
LIVE | Ramaphosa moves South Africa to lockdown Level 3