Breytenbach is set to appear in the Cape Town Magistrate's Court on a charge of sexual assault.

Warrant Officer Rowan Andrews of the Western Cape Family Violence, Child Protection and Sexual Offences Unit, who served the warrant of arrest on Breytenbach, said the alleged sexual predator indicated he would co-operate with the police. Alleged sexual predator Willem Breytenbach is expected to appear in the Cape Town Magistrate's Court on Wednesday or Thursday.

WATCH | Catching an alleged sexual predator: How the arrest of Willem Breytenbach unfolded

The arrest of former teacher, media executive and alleged sexual predator Willem Breytenbach was nearly a non-event as Breytenbach was nowhere to be found when police arrived at his mother's seaside home in Reebok, Mossel Bay, on Tuesday just after 12:00. When the police entered the house, it seemed eerily quiet.

The arrest of former teacher and media executive and alleged sexual predator Willem Breytenbach was nearly a non-event as Breytenbach was nowhere to be found when police arrived at his mother's seaside home in Reebok on Tuesday.

As my former news editor, I can only imagine Willem Breytenbach demanding the photo be splashed on @Die_Burger front page over at least 3 columns, demanding a quote from the arrested (although they never talk), with choice drop quotes sprinkled in from family and friends. https://t.co/PWP0A0evom

The man on the left in the black shirt is Warrant Officer Rowan Andrews. He catches sexual abusers and rapists for a living. 20 days ago I told him about #WillemBreytenbach. Today, he arrested Breytenbach in Hartenbos. Andrews is one of the many heroes of the @SAPoliceService. pic.twitter.com/VoW1t8bQrR

Willem Breytenbach was arrested at his psychologist's practice in Hartenbos. (Jaco Marais, Netwerk24) After being arrested in Hartenbos, Breytenbach was driven by the police to his mother’s house in Reebok, where he was allowed to change clothes before being taken away by four police officers.

Breytenbach was handcuffed before being taken into the Mossel Bay police office.

Deon Wiggett, in a four-part true crime podcast supplied exclusively to News24, tracks down the man who sexually abused him more than 20 years ago.

In the first podcast, Wiggett recounts a chilling story of how he and other boys were allegedly sexually molested by a man - dubbed Jimmy - who used to be a teacher at Grey College. Wiggett's memories of abuse were jolted by his father's death in November 2017.

PART 2: Tracking the 7 'missing years' of the man who raped me 20 years ago

In his second podcast, Wiggett sets off to Grey College under a guise in an attempt to gain access to the school's archives to find more of Jimmy's victims. He easily charms his way into the school by pretending to be part of a research project.

Wiggett unmasks "Jimmy" as Willem Breytenbach. He dedicates the third episode to Ben whom he describes as his brother. "Ben, thank you. Meeting you gave me the big break I needed, both factually and emotionally. He is one of the heroes of this story. Not only are you my brother, but you were the first to say to me, 'me too'."

PART 4: 'Willem Breytenbach will no longer bother us and I find peace in that'

In the much-anticipated finale episode of My Only Story, Wiggett finds out more startling information on Breytenbach's "seven missing years" and his time time at Die Burger. Wiggett ends off the podcast by saying he did it for three reasons: justice, activism and art. But he also discovered a fourth reason: revenge.

Exposing a sexual predator who taught me about news

Two years ago, I listened in awe to New York Times journalist Jodi Kantor speaking at a conference about how she and other colleagues exposed the sexual abuse of Hollywood supremo Harvey Weinstein, that set off the #MeToo movement in the United States. For years, Hollywood gossiped about Weinstein's dark side.

Now, finally, some women were willing to put pen to paper. Under oath. Kantor spoke about how difficult it was to listen to and report on the stories of Weinstein's survivors; how they had to tread carefully between showing empathy but still doing the basic journalistic checks to be able to publish.

During a smoke break on a windy New York day, I turned to my colleague. "You know our Weinstein moment is coming," I said. "Who?" she asked. "Willem Breytenbach." 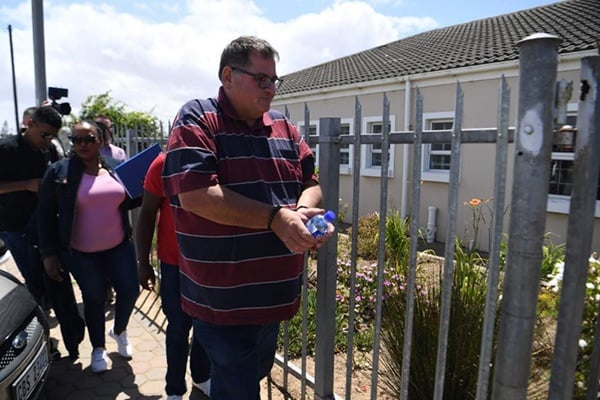 BREAKING: Willem Breytenbach has been arrested on a charge of sexual assault. #myonlystory @TeamNews24 pic.twitter.com/Ia5d70LAzg

"Jimmy" is behind bars.

The alleged sex offender Willem Breytenbach - who has been accused of rape by Johannesburg-based copywriter Deon Wiggett - was arrested at his psychologist's practice in Hartenbos, close to Mossel Bay, in the Southern Cape on Tuesday.

Breytenbach is a former Media24 executive, teacher and digital entrepreneur. Warrant Officer Rowan Andrews of the Western Cape Family Violence, Child Protection and Sexual Offences unit arrested him after Wiggett and three more men opened cases against him with the police.

LISTEN: MY ONLY STORY | A podcast series and live investigation into a sexual predator

Six more young men have accused former media executive Willem Breytenbach of sexual grooming, harassment and assault during his time at Media24 and as a digital entrepreneur.

The men came forward after the publication of Deon Wiggett's podcast, My Only Story, on News24 three weeks ago.

They spoke to News24 on condition of anonymity - some still fear Breytenbach, while others do not want their families to know what had happened to them or fear negative repercussions in their professional careers.

ANALYSIS | From Kroonstad to Three Anchor Bay: How Willem Breytenbach got away for 40 years

The Free State farming town of Kroonstad does not have a beach.

Kroonpark holiday resort, with its indoor, heated swimming pool and water slides for the children, is the closest it gets to a beach in this town in central South Africa.

When you Google image search the town, pictures of cows, churches and Boer statues appear. Most South Africans probably know Kroonstad through the Shell Ultra City filling station next to the N1 highway on the way to Cape Town.

Here are your Lotto and Lotto Plus results
Full list of lottery results
Lockdown For
DAYS
HRS
MINS
Voting Booth
A few positive Covid-19 cases have been confirmed at two SA rugby franchises.. Should teams proceed with return to training protocols?
Please select an option Oops! Something went wrong, please try again later.
Yes, SA rugby is already behind the eight ball compared to New Zealand and Australia
14% - 181 votes
It’s too dangerous, the country is only now heading into the Covid-19 storm!
41% - 543 votes
Get the ball rolling, Covid-19 is here to stay as the 'new normal'
45% - 598 votes
Previous Results
Podcasts
PODCAST | THE STORY: What next for Gauteng as it overtakes Western Cape as SA's Covid-19 hotspot