#EFFManifesto: What the EFF is promising voters 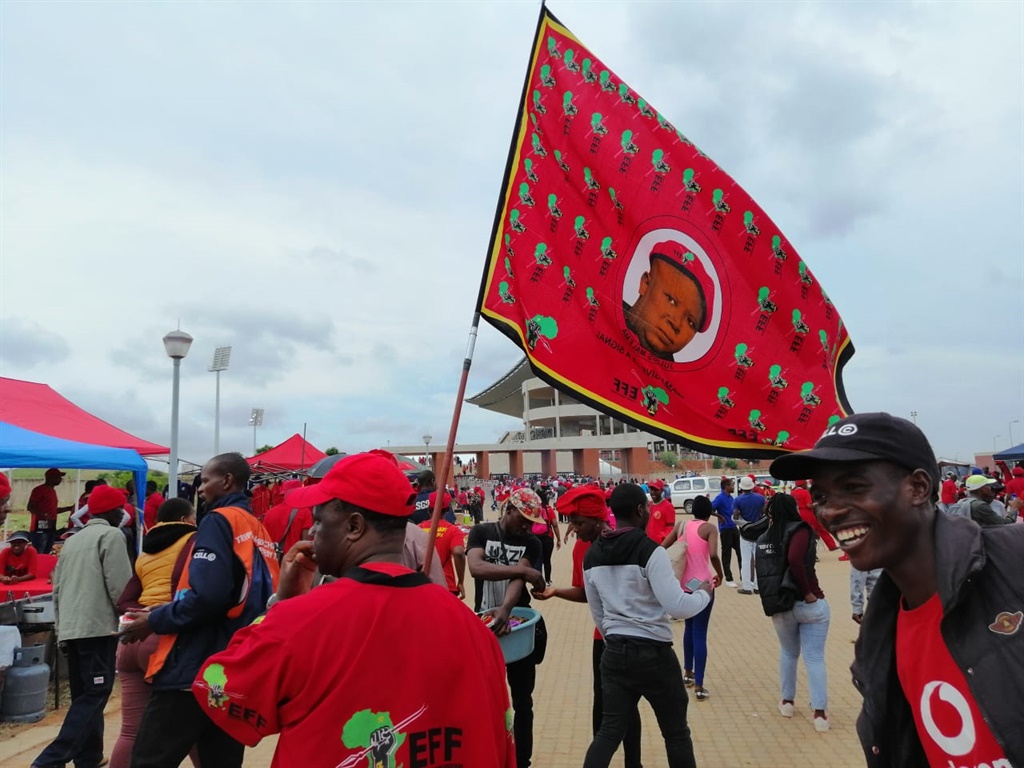 Supporters at the EFF manifesto launch in Pretoria. (News24)

The EFF in aiming to produce an alternative reality for South Africans has vowed to introduce free decolonised education for all.

And its plans for government are all laid out in a 168-page document dubbed "Peoples' (sic) manifesto and action plan".

In its manifesto, which it launched in Soshanguve on Saturday afternoon, it claims this will allow for topics relating to indigenous knowledge, sovereignty and economic freedom to be advanced.

#EFFManifesto and it’s done... Malema says they are armed and ready to fight with this document @TeamNews24 pic.twitter.com/YE7wp92kVN

Should it win the hearts and minds of South Africans in either the national or provincial polls come May, its leader Julius Malema told the thousands gathered in the crowd government would require each university in the country to offer degrees and courses in coding, computer hardware development, artificial intelligence, robotics, the internet and biotechnology by 2022.

In their manifesto the red berets raise concern over “insufficient learning spaces,” which includes actual classrooms and accommodation for students at institutions of higher learning.

“South Africa still has schools where children learn under trees or in mud structures and/or must use pit toilets,” the EFF notes in its policy document.

It also noted that some schools still used the bucket toilet system, while many children were exposed to bogus imitation schools. It lamented the fact that there are still scores of youngsters who have to walk long distances to attend school.

Beyond transport for learners who live far from schools, remedial teachers, safe flushing toilets and tablets for learners, the EFF has also listed areas which would see new schools built across all nine provinces the country.

Malema called on the party's "fighters" to safeguard the new technology used in their schools and to prevent criminals from stealing tablets and other devices.

The party makes it clear that land and jobs are its priority, with the slogan "Our land and jobs now!" emblazoned on its manifesto booklet.

The topic of land is explained over nine pages, while jobs and unemployment are addressed throughout the document.

"It is our firm belief that the crisis levels of poverty, inequality and underdevelopment being experienced in the country can be ended by the reclamation and equitable redistribution of the land and the creation of jobs," reads the manifesto on page 10.

The EFF has promised that its government would lead "massive and protected sustainable industrial development and diversification to create millions of decent jobs between 2019 and 2024".

The party said that should it be voted into government, that job creation and growth will be driven through state-led industrialisation, industrial diversification, and the protection of infant and existing industries.

The party's manifesto also seeks ownership of those industries to black people through subsidies, an increase in tariffs, and state-aided marketing and promotion of South African products internally and across the continent.

Earlier on Saturday, EFF Chairperson Dali Mpofu said the manifesto was not only promises, but commitments which would have clear timelines and deadlines.

The "commitments" from the EFF on land remains that its government will ensure section 25 of the Constitution is amended to allow expropriation of land without compensation for equal redistribution and that this is carried out with immediate effect.

The party wants the state to own all land, for equal redistribution to all.

"The EFF government will redistribute a minimum of 50% of the land to be controlled by women and the youth ... and abolish foreign land ownership".

The manifesto also deals with housing, human settlements, and water and sanitation over six pages.

"We will provide quality, spacious houses to all the people. These houses will be located within sustainable human settlements with basic services such as water, electricity, sanitation, schools, shopping complexes, sports and recreation grounds, and parks."

The party wants to re-zone all informal settlements by 2021.

The banks may not like some of the EFF's proposals on home loans, as the party vows to make it illegal for these financial institutions to repossess houses from "people who have paid off 50%of their bonds and are unable to continue paying their bond instalments due to socioeconomic circumstances,by the end of 2019".

It says it will also push for home loan periods to be capped to 10 years, down from the current 20- to 30-year payment lifespan.

Corruption is thorny issue which all political parties are likely to address, especially as the commission of inquiry into state capture continues to show the obscene extent of bribery and graft in government.

The EFF manifesto also seeks to assure supporters that its government will increase, harness and enhance the efficiency and effectiveness of governance institutions to pre-empt and avoid all forms of corruption.

"We will abolish the usage of private companies to fulfill functions and duties that government should fulfill ... and ban the usage of consultants and project management units as a basis for delivering government services".

The promise list also promises a minimum sentence of 20 years for all public representatives and civil servants convicted of corruption.

"We will introduce legislation preventing all public representatives and public servants from doing any form of business with public institutions," it reads.

In the list, and reiterated by Malema during the launch at Giant Stadium, the party states its intention to "pass a law that will make all public representatives and civil servants forfeit their pension funds and savings if they are found guilty of corruption".

Capping off the document is the party's plans for matters of international relations which includes "ending the global imperialist dominance of the West", the "African isolation of Botswana" due to the US military base in that country and fighting for "democratic political reforms in Swaziland".

The manifesto document outlines some lofty goals and visions for South Africa, but as with most political party manifestos, it leaves the voter asking, "How will this all be done?"

We live in a world where facts and fiction get blurred
In times of uncertainty you need journalism you can trust. For 14 free days, you can have access to a world of in-depth analyses, investigative journalism, top opinions and a range of features. Journalism strengthens democracy. Invest in the future today. Thereafter you will be billed R75 per month. You can cancel anytime and if you cancel within 14 days you won't be billed.
Subscribe to News24
Related Links
Mpofu: We're making commitments, not promises
Next on News24
LIVE | Covid-19 in SA: Cases rise by 212