Caledonian Stadium in Tshwane turned into a makeshift shelter for the homeless during the lockdown.
Alex Mitchley

At least 200 homeless people have managed to escape from the Caledonian Stadium in Pretoria where City of Tshwane law enforcement had placed them after the lockdown kicked off in the early hours of Friday morning.

News24 can exclusively reveal that problematic conditions, coupled with an insufficient number of police officers at the stadium, led to a large number of people running away.

As the lockdown got underway, more than 2 000 homeless people were taken off the streets by City law enforcement and moved to the Caledonian Stadium in Arcadia.

The large number of people at the stadium caught officials off guard, and issues of overcrowding and food shortages started to emerge.

Frustrated by not being able to look after themselves, and the cramped conditions, homeless people started jumping the fences, going back to the streets.

A source with intimate knowledge of the operations at the stadium confirmed to News24 that people had managed to escape as there weren’t enough law enforcement officers to properly monitor the parameters.

Another source also confirmed the situation at the makeshift shelter, adding that the homeless were unsatisfied with the conditions at the stadium where they were now forced to stay.

Both sources could not confirm the exact number of people who had left, as it was believed that some of those who decided to leave had returned for food. This resulted in the tallied numbers of the homeless at stadium fluctuating.

"Some have run away, but others are leaving during the day and coming back at night to eat," one source said. 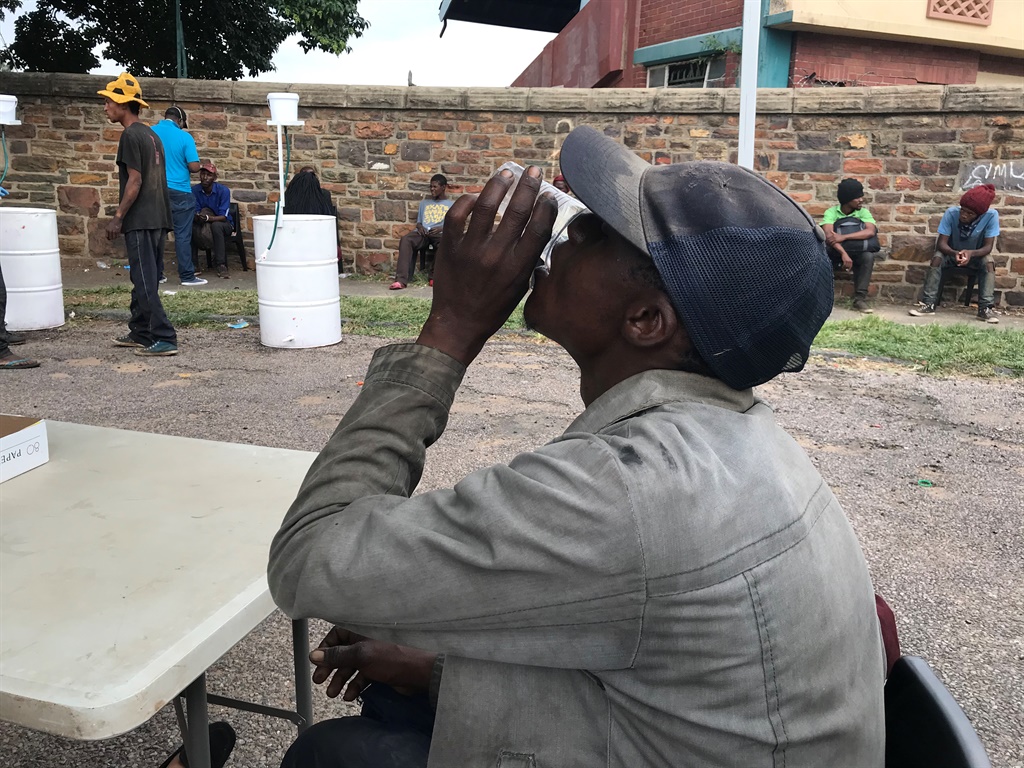 The situation at the stadium has been exacerbated by miscommunication between different spheres of government and non-governmental organisations, along with poor planning.

City of Tshwane head administrator Mpho Nawa confirmed the situation at the stadium and said it was estimated that around 200 people who were brought in were now missing.

"Let me concede that, in the beginning, the first two days of this lockdown, we had a lot of people who were put in the Caledonian, and the City and government as a whole was not fully ready," Nawa said.

"Since then, we have tried to put people in different places, so we are able to care for them. The issue is that we should bring them back and take care of them.

"We have engaged our police services and the security in general that, lets bring them back because we seem to be ready this time around."

On Tuesday, Gauteng acting MEC of social development Panyaza Lesufi also conceded that the number of homeless people at the stadium had been underestimated.

Caledonian Stadium in Tshwane turned into a makeshift shelter for the homeless during the lockdown. (Alex Mitchley, News24)

Lesufi said that, when government started planning for the shutdown, they had estimated that there would be around 15 000 homeless people who would have to be catered for across the province.

However, those figures dramatically increased. It is estimated that there are around 50 000 homeless people in Gauteng. Johannesburg has 15 000 and Tshwane 10 000, with 6 000 of them living in and around the city centre.

"It’s not that we didn’t plan, we underestimated the numbers," Lesufi told News24.

"The reality is that we have underestimated this number. All the plans we had as government, we need to go and rework them, because we have more people than we thought, and if we can’t address this problem it will increase.”

Nawa and Lesufi have since said that the Caledonian Stadium would no longer be used as a shelter, but rather as a screening centre before the homeless are relocated to other temporary shelters that have been identified.

"We have identified spaces across the city so that we can limit the numbers. We can observe the conditions of the lockdown and spaces to ensure that we don’t cramp people in one space," Nawa said. On Wednesday, around 370 homeless people were relocated from the Caledonian to the Lukas van den Berg Sports Grounds in Pretoria West. More that 200 women and children were also moved to another makeshift shelter in the capital city.

Lesufi and Nawa visited the sports grounds in Pretoria West on Wednesday, where the homeless will be living in UN refugee tents for the duration of the lockdown.

Lesufi said the homeless would be looked after, fed three times a day and would receive the medical attention they require. The homeless have also been given dignity packs that contain a toothbrush, toothpaste, soap, face cloth and deodorant. Two homeless men sit outside of their tent in a makeshift shelter in Pretoria west during the Covid-19 lockdown. (Alex Mitchley, News24)

During the lockdown there are also plans to teach the homeless soft skills, to try and reconnect people with their families where possible, and to have those who are addicted to drugs undergo rehabilitation.

Lesufi and Nawa said that other sites were being identified and prepared as temporary shelters to house the homeless during the lockdown.

Several people at the temporary shelter in Pretoria West told News24 that they were happy to move from the Caledonian and that the conditions were far better. A homeless man plays cricket at the Lukas van den Berg Sports Grounds in Pretoria West being used as a makeshift shelter during the lockdown. (Alex Mitchley, News24)

We live in a world where facts and fiction get blurred
In times of uncertainty you need journalism you can trust. For 14 free days, you can have access to a world of in-depth analyses, investigative journalism, top opinions and a range of features. Journalism strengthens democracy. Invest in the future today. Thereafter you will be billed R75 per month. You can cancel anytime and if you cancel within 14 days you won't be billed.
Subscribe to News24
Related Links
Concern as desperate homeless people escape shelter
WATCH | Coronavirus: Chaos erupts at makeshift shelter in Tshwane for homeless over food shortages
WATCH | Army takes firm stance against Johannesburg’s homeless as lockdown gets under way
Next on News24
BREAKING NEWS LIVE | Case of Brian Molefe, Siyabonga Gama and others postponed to April next year