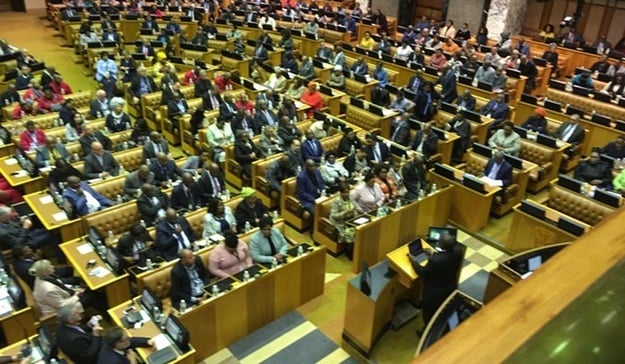 President Cyril Ramaphosa behind the podium to respond to the SONA debate. (Jan Gerber, News24)

Expropriation without compensation "in defined circumstances" is but one of the ways to reform South Africa's plans to achieve agrarian reform and spatial justice, and individual rights to land will also be recognised, President Cyril Ramaphosa said.

Thereby Ramaphosa distanced his government from nationalising all the land, not for the first time.

He responded to the debate on his State of the Nation Address (SONA) at a joint sitting of both houses of Parliament when he tackled the issue of land reform, which didn't feature strongly in his SONA.

"A significant part of our efforts to unleash growth while advancing transformation is our accelerated programme of land reform," Ramaphosa said.

READ: It's not the willing seller, but the corrupt buyer sabotaging land reform

He said by merging the portfolios of agriculture, rural development and land reform, government established "the institutional basis for a comprehensive approach to the economic development of our rural areas".

"Through this, we will unlock the potential of the sector by removing constraints in accessing land, finance, markets and water and improving safety in our rural areas," Ramaphosa said.

"We are determined that land should be distributed to those who work and those who need it," Ramaphosa said, echoing the Freedom Charter, which was adopted 64 years to the day.

He said the Presidential Advisory Panel on Land Reform and Agriculture's report will be released soon.

"This report will inform the finalisation of a comprehensive, far-reaching and transformative land reform programme.

He said Parliament has two important tasks: finalising the constitutional amendments to Section 25 to "clearly indicate how to expropriate land without compensation will be put into effect" and passing the Expropriation Bill, "which deals with the modalities and the circumstances in which expropriation will take place".

"Expropriation is as an important land acquisition strategy. It is important because it enables us to conduct land reform in a pro-active and planned manner," Ramaphosa said, to groans from the DA benches.

"This frees us from a wait-and-see approach dependent on market sales. Expropriation without compensation, in defined circumstances, allows us to do so at a cost that is reasonable for the South Africa people.

"But we must not lose sight that it is but one instrument in a much broader toolbox to achieve agrarian reform and spatial justice."

He said they want to make all rights visible and enforceable, and strengthen institutions of collective ownership.

"New technologies enable us to organise the rich diversity of institutional frameworks that exist in our country.

"At the same time, we continue with the process of identifying suitable public land for human settlements and farming," Ramaphosa said.

"I am pleased that the Honourable Malema agrees with me that we will never resolve the social ills of our country without addressing the land question," Ramaphosa said to EFF leader Julius Malema.

On Tuesday, Malema said the land question is at the root of the country's social problems, and it if it isn't resolved, "our people will engage in an unled revolution".

Later in the debate, EFF MP Nkagisang Koni said the land question should be finalised by the end of the year and all land must be in the custody of the state.

We live in a world where facts and fiction get blurred
In times of uncertainty you need journalism you can trust. For only R75 per month, you have access to a world of in-depth analyses, investigative journalism, top opinions and a range of features. Journalism strengthens democracy. Invest in the future today.
Subscribe to News24
Related Links
Ramaphosa: We're still living with the 'devastating' impact of Natives Land Act
Ramaphosa steers clear of Bosasa in reply to SONA debate
'I do not want South Africa to perish': Scroll for Ramaphosa's #SONA debate reply
Next on News24
LIVE | UJ adopts mandatory Covid-19 vaccination for all staff, students