Radio and TV presenter Frankie du Toit caused quite an online stir when he posted a heartfelt tribute to his mother who retired after almost 50 years as a maths teacher on Friday - much to her irritation.

Du Toit, who is a co-host of The Breakfast Club on Johannesburg radio station, 947, previously known as Highveld Stereo, posted a series of tweets on Tuesday honouring his mother's career and legacy.

In a video taken on her last day at work on Friday, Elmarie du Toit, 70, is seen walking from her classroom at Woodhill College in the east of Pretoria to the parking lot as the school corridors are lined with mask-clad pupils and staff members, clapping and cheering her on. Clutching her handbag, she pauses a few times to exchange remarks with some of the pupils. She had been a teacher there for nearly 20 years.

Frankie wrote that the children bought a little porcelain owl called Ellie, named after her, which she put in the garden so they can remember her when they walk past it at the gate.

"Like so many amazing teachers in our country, she's dedicated her life to helping kids grow and learn. Thousands of young minds have sat in her maths classes over the past five decades and I have never met a pupil that didn't love Mrs Du Toit. She made maths fun and was tenacious at helping every child that struggled," he wrote.

I’ve got to share this with all of you. After 50 years of teaching my mom retired at the age of 70 and the whole school gave her a guard of honor. ???????????? [A Thread] pic.twitter.com/PQlmFKPmIx

Swapping the classroom for the internet

Speaking to News24 on Wednesday, Frankie says while his mom has "retired" from teaching in a brick-and-mortar classroom, she has moved on to teaching online.

"She has joined Brainline, which is a remote-learning academy, and she will continue to teach full time. My sister and I have tried to convince her to retire for good, but this is her passion she doesn't want to give it up. She is quite the technophobe, but she was willing to learn.

"So, over the past three weeks, we and some other people helped her to become au fait with the technology involved, and now she makes the rest of us look like fools with her mastery of the equipment. So, after 50-odd years in a classroom, she is continuing her career on the internet."

Frankie says she continued to teach throughout the lockdown because she felt she couldn't leave her matric pupils in the lurch.

"Even when she was battling cancer a few years ago, she soldiered on throughout her chemotherapy. That was just staggering. I don't think she took more than five days' sick leave during that entire period," he says proudly.

"I posted the video and pictures on Tuesday without her knowledge and when I called her to tell her about it, she scolded me for a good 30 minutes. She didn't want any recognition for the contribution she has made to society - she is extremely humble."

And Frankie is quite right, Elmarie's humility is apparent when she reacts to being called about her son's social media antics.

"I don't understand why all of you are so interested in an old woman who's retiring..." she quips during an interview with News24 on Wednesday afternoon. 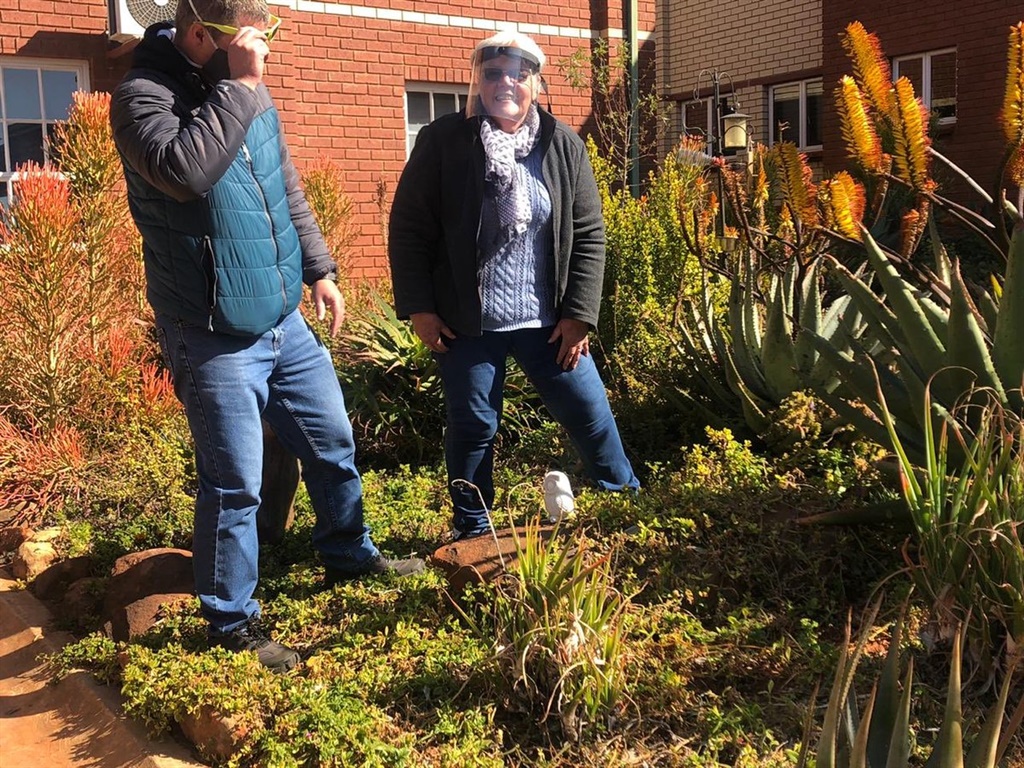 'Teaching was never my plan'

"I am very cross with Frankie for putting this on Twitter. I told him, you should stay away from me for a while, he can really keep his mouth shut for a change," she says, laughing.

Elmarie studied at Stellenbosch University and, after obtaining her degree and teaching diploma, taught in Cradock for three years before leaving teaching for a while.

"I never really saw myself as a teacher, that was never my plan. But a few years after I left, I realised that this was my calling, and I've been teaching ever since."

Elmarie says, looking back, it's hard to believe that so many years have gone by since her career started.

"Time goes by so quickly. When you are young, you don't realise that. But I still have the same passion I always had. I love mathematics and I enjoy teaching it. I'm also crazy about working with teenagers. That's why I just continued doing it through all these years.

"And now I decided to carry on teaching online. At this point I can't say too much about that as I only started on Monday. But it is vastly different from being in a classroom."

Elmarie was completely taken by surprise by the pupils' guard of honour on Friday.

"Because of Covid-19, you can't have assembly and gatherings, so this was such a lovely, special gesture. I really didn't expect it. The pupils and staff at Woodhill are incredible."

A calling, not a career

According to Elmarie, teaching is a calling, not a career. "You are born a teacher. If not, you won't last long, you won't be able to cope."

Asked about what some of the highlights of her decades-long career have been, Elmarie muses: "I don't know what to say about that. All I did was to raise two children and teach. And that's it...

"However, teaching has been a great privilege for me. People have been very kind to me - that's all I can really say."

We live in a world where facts and fiction get blurred
In times of uncertainty you need journalism you can trust. For only R75 per month, you have access to a world of in-depth analyses, investigative journalism, top opinions and a range of features. Journalism strengthens democracy. Invest in the future today.
Subscribe to News24
Related Links
FEEL GOOD | Durban boy surpasses R15k fundraising goal for bird park - and gets special visit on...
FEEL GOOD | Cops reach into their pockets to help family who lost home in blaze
FEEL GOOD | Mandela Day: 67 000-litre soup target smashed by more than 300 chefs in 10 cities
Next on News24
LIVE | Covid-19 in SA: 80 new deaths as cases hit 2 917 846