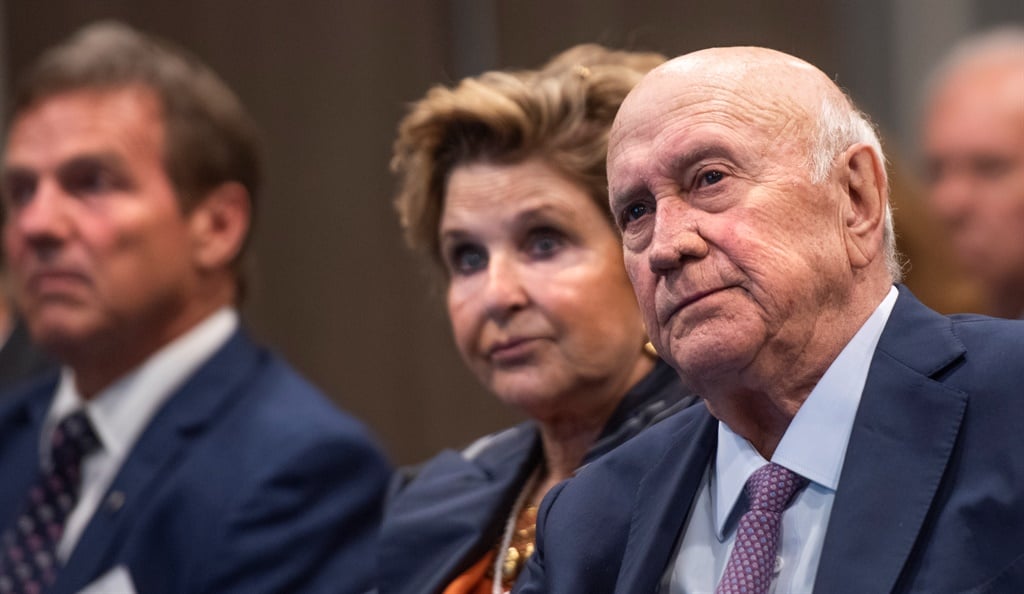 FW de Klerk and his wife Elita Georgiades at the FW de Klerk Foundation Conference at the Raddison Blue Hotel in Waterfront on January 31, 2020 in Cape Town.
Gallo Images/Brenton Geach

In the wake of issuing and then withdrawing a contentious statement about apartheid, the FW de Klerk Foundation says it has "come out wiser", but that no one is expected to be fired or resign.

"I don't believe there will be a change in leadership at the foundation," Dr Theuns Eloff, advisory board chair of the foundation, told News24 on Tuesday.

"FW de Klerk is the emeritus chair and I don't believe that Dr Dayne Morkel, the new CEO, will leave because of this. This was a lesson for us and we came out the wiser."

Morkel, 33, a former investment banker, was appointed in January this year.

Eloff continued: "It was a mistake to issue that statement, and I believe that the mistake was made because of an error in judgement and some emotionality over the attacks by the EFF."

In interviews before the State of the Nation Address (SONA) last week, De Klerk said that apartheid could not be compared with genocide and that, while apartheid had led to the deaths of many people, more had died because of "black-on-black violence" than because of apartheid.

Before President Cyril Ramaphosa could utter a word in his address on Thursday evening, EFF leader Julius Malema rose on a point of order, asking that De Klerk be removed from the National Assembly chamber's public gallery. De Klerk was seated there with former presidents Thabo Mbeki and Kgalema Motlanthe.

The foundation issued a statement the following day in which it labelled the notion that apartheid was a crime against humanity "soviet agitprop" – propaganda meant to agitate.

Following massive backlash, the foundation released another statement on Monday.

In it, De Klerk said he had taken note of the angry reaction to the statement that had insisted that apartheid was not a crime against humanity.

It also agreed that with the International Criminal Court's provision that apartheid was indeed a crime against humanity.

We live in a world where facts and fiction get blurred
In times of uncertainty you need journalism you can trust. For 14 free days, you can have access to a world of in-depth analyses, investigative journalism, top opinions and a range of features. Journalism strengthens democracy. Invest in the future today. Thereafter you will be billed R75 per month. You can cancel anytime and if you cancel within 14 days you won't be billed.
Subscribe to News24
Related Links
FW de Klerk must demonstrate true remorse through words and deeds - ANC
FW de Klerk apology welcomed, but damage has been done - Nelson Mandela Foundation, IJR
Wilhelm Verwoerd | FW de Klerk saga: facing the dehumanisation of apartheid
Next on News24
LIVE | Covid-19 in SA: 3 274 new cases