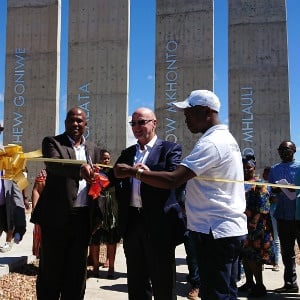 The Eastern Cape tourism department has unveiled a Garden of Remembrance in memory of four anti-apartheid activists known as The Cradock Four.

Fort Calata, Sparrow Mkhonto, Sicelo Mhlauli and Mathew Goniwe were abducted and killed by the South African security police in 1985. Their bodies were later burnt.

"The Cradock Four Garden of Remembrance embraces the historic memoirs of anti-apartheid activists [and] tourism's infrastructure improvements at the site will enable the community to host educational and cultural activities that facilitate information sharing and celebrate the legacy of the four activists," the department said in a statement issued ahead of the unveiling.

ANC Eastern Cape chairperson Oscar Mabuyane added: "Because of their courage, we will commemorate Human Rights Day and honour them with the Garden of Remembrance which would serve as a lasting reminder of their contributions for future generations."

READ: Fictional novel looks at the non-fictional story of the Cradock Four

SABC News reported that some widows of the slain anti-apartheid activists described the official opening of the garden as a bittersweet moment.

Goniwe's widow told the broadcaster that she had mixed emotions.

"It is long overdue. This site has been standing empty for so many years and we even thought it would never be realised. It is a dream realised instead of being deferred for so many years. We are excited about it, not only because it is opening today (Thursday) but what it could be for the community," she said.

"I remember my father-in-law because he is the one who was expected to go down to Port Elizabeth to identify the body, talking to himself saying how can they kill my son so gruesomely," Mhlauli's widow said.

Hanekom said the site would serve as a heritage site and tourist attraction in Cradock.

Minister @Derek_Hanekom with some of the Cradock 4 family members conducting a walk about to view the facilities built by the Department to enhance the liberation site. #Cradock4 pic.twitter.com/fQVgtV64ll

We live in a world where facts and fiction get blurred
In times of uncertainty you need journalism you can trust. For only R75 per month, you have access to a world of in-depth analyses, investigative journalism, top opinions and a range of features. Journalism strengthens democracy. Invest in the future today.
Subscribe to News24
Related Links
The Calatas, Cradock… and a crime against humanity
Four little pigs no fairytale for Cradock residents
Next on News24
LIVE | Covid-19 in SA: 53 new deaths as cases hit 2 920 109