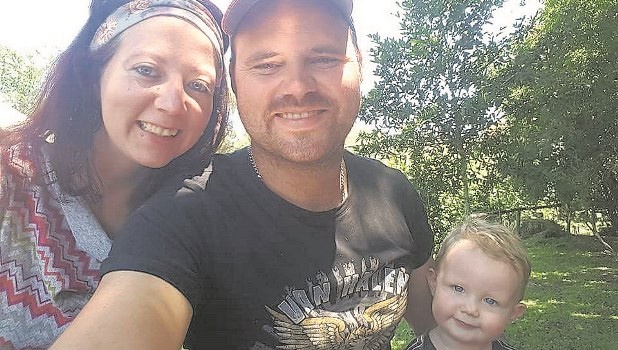 FROM LEFT: Brave mother Mar-Louise, her husband Andre Pretorius and their now three-year-old son, Liam. Mar-Louise and Andre miraculously survived a 35-metre fall from the Karkloof Falls on Saturday.

A young mother’s quick thinking saved her three-year-old son from certain death before she and her husband fell 35 metres from the Karkloof Falls on Saturday afternoon.

Young Howick couple Mar-Louise (29) and Andre Pretorius (31), who have lived in the area for the past two years, had been spending the day at the falls with friends and their three-year-old son.

Family relative Herman Scholtz spoke on Tuesday to The Witness on behalf of the couple, who are still in ICU and are unable to give interviews.

He said while Mar-Louise is now able to talk, Andre is still under sedation having suffered serious head injuries.

“Mar-Louise is communicating with us, and is aware of her surroundings. She seems to be doing well and the doctors have indicated she should make a full recovery,” said Scholtz.

He said Andre had sustained serious head injuries as well as injuries to his lungs and that although he was still on a ventilator, his condition had “improved dramatically from Saturday afternoon”.

“When I went to visit Mar-Louise the morning after the incident, she could not remember what had happened.

“She asked me what she was doing in hospital because the last thing she remembered was rushing Andre to hospital. That is when we told her she had gone over the waterfall with him.”

He said the next day, the young mother was able to remember what had happened. “She told us that she called to Andre to go home. He was taking photographs and as he took a step back, he slipped.

“As he started falling, a family friend reached over to grab him while Mar-Louise quickly handed her three-year-old son to another friend. Mar-Louise then jumped over the friend trying to help Andre, and grabbed Andre’s hand and that’s when they both went over.

“They did not fall straight down. I think they hit a few ledges on the way down. They are lucky to have survived and to be alive, and lucky that there were people around who were so willing to help.”

Scholtz said bystanders and friends at the scene were “absolutely amazing”.

Paramedics and bystanders  help Mar-Louise and Andre Pretorius after the couple fell 35 metres from the Karkloof Falls on Saturday afternoon. (Photo: Midlands EMS)

“Some people actually pulled them out of the water so they did not drown and others stayed right to the end of the rescue to see if they could help.”

He said the couple had been rushed to Mediclinic for emergency treatment but had no medical aid and could not be moved to a state hospital due to their injuries.

Scholtz said the couple had moved to Howick around two years ago and immediately fell in love with the town.

“The Howick community have started a few projects to help raise money for hospital fees. Local businesses are also rallying around them and our family to help where they can.”

He said his town of Nigel in Gauteng and Hermanus in the Western Cape (where Andre is from) had also started up a few fund-raising projects to help with the couple’s mounting medical fees. Scholtz said the couple’s son, Liam, was doing well and had fortunately not seen his parents fall over the ledge.

“People have jumped in to help; people we do not even know. The hospital has also been absolutely amazing. I have never experienced a hospital with such supportive and caring staff.

“I am trying to think of a way to say thank you to everyone who has helped but how do you thank a person who has saved a life? There is just not enough gratitude in the world.”

Scholtz said he would keep the media updated on the couple’s condition and asked that if anyone wanted any information on how to help the family, even if it is cooking a meal, to e-mail scholtzjh@gmail.com