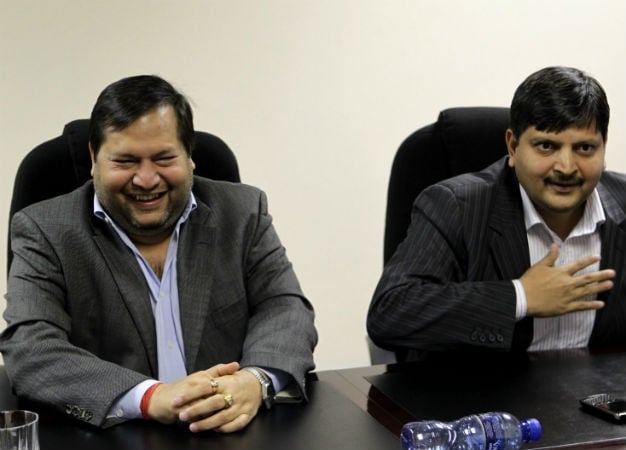 Ajay and Atul Gupta, whose sons are getting married at a luxury ski resort in June.
File, City Press.

Wedding bells are set to ring yet again for members of the Gupta family, who are planning two lavish weddings at a premier ski resort to the tune of 200m Indian rupees (around R43m), according to reports in the Indian media.

According to The Times of India, the picturesque ski resort of Auli, situated in the Chamoli district of the Garhwal Himalayas, is set to host what may well be "the most high-profile wedding[s] to be hosted in Uttarakhand in recent times".

According to The Economic Times, almost all the hotels and resorts at Auli have been booked for the week-long festivities, for which flowers are being imported from Switzerland.

Helicopters have reportedly been hired to ferry the guests, which will include politicians, business leaders, Bollywood stars as well as other dignitaries.

The Weekend Leader reported that Suryakant's wedding ceremony will be held from June 18 to 20, while Shashank's will be from June 20 to 22.

The wealthy Gupta family have been the focus of an inquiry into their involvement in capturing the state and their close ties to former president Jacob Zuma.

The wedding of the Gupta brothers' niece in 2013 at Sun City was one of the most lavish celebrations the country has ever seen: it was a four-day extravaganza costing millions while the entire country was outraged by the wedding party's landing at Waterkloof Air Force Base, News24 reported. When Vega Gupta wed Aakash Jahajgarhia, it was a "party on a scale seldom seen before in South Africa".

Sun City was reserved for the exclusive use of the Guptas and their guests from April 30 to May 4, 2013, with the Gupta brothers arranging to check in to the Palace Hotel a week earlier; 231 rooms were booked.

Although the wedding was intended as a display of the Gupta family's wealth and powerful connections, it also exposed the underbelly of those relations when the family was given permission to land a plane full of guests at the Waterkloof Air Force Base, amaBhungane reported.

The #GuptaLeaks would later provide evidence of how R30m from the provincial government-funded Estina dairy project in the Free State was laundered through a series of bank accounts in the United Arab Emirates to pay for the wedding.

A second lavish Gupta wedding was reportedly held in April 2016, at the Mardan Palace in Antalya, Turkey.

The three-day wedding of Ajay Gupta's son Kamal Singhala was estimated by one publication to have cost €10m (about R154m now) and took place barely two weeks after most of the family hurriedly left South Africa aboard their private jet on a late-night flight out of Lanseria airport, according to amaBhungane.

The Guptas hosted another extravagant wedding – said to have cost the controversial family about R100m – at the luxurious five-star Emirates Palace hotel in Abu Dhabi in February, News24 reported.

In March last year, a massive raid on the Guptas' Indian businesses and properties was carried out by the country's tax authorities, according to media publications in India, News24 reported.

According to news articles, which have been translated from Hindi, a multidisciplinary task team led by India's income tax department raided the Guptas' house in Saharanpur as well as the office of Ajay Gupta's accountant.

The raids focused on the Guptas' accounting and income expenditure records.

According to reports in the Indian media, the government of Trivendra Singh Rawat, the Chief Minister of Uttarakhand, is taking a keen interest in the latest wedding arrangements.

We live in a world where facts and fiction get blurred
In times of uncertainty you need journalism you can trust. For only R75 per month, you have access to a world of in-depth analyses, investigative journalism, top opinions and a range of features. Journalism strengthens democracy. Invest in the future today.
Subscribe to News24
Related Links
WATCH: My big fat Gupta wedding – the movie
Next on News24
LIVE | Covid-19 in SA: Cases rise by 4 100 as death toll goes up by 34

Here are the results for the Daily Lotto draw
Full list of lottery results
Lockdown For
DAYS
HRS
MINS
Voting Booth
Matric results are out! Are you happy with your child's result?
Please select an option Oops! Something went wrong, please try again later.
No, the pandemic really messed up their ability to focus
34% - 889 votes
Yes, they did well given the circumstances
66% - 1691 votes
Previous Results
Podcasts
LISTEN | The Inge Lotz Story - a miscarriage of justice