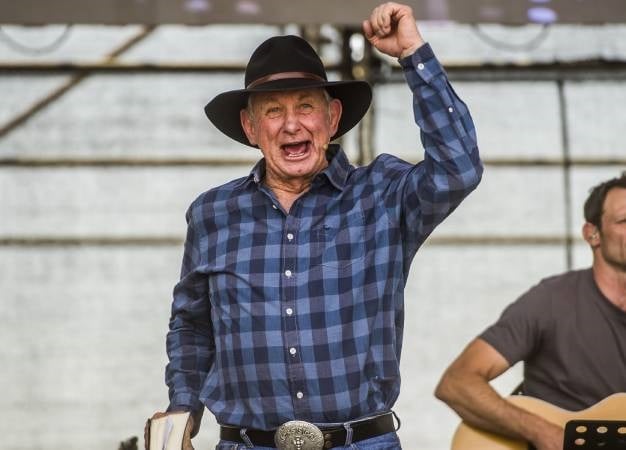 Evangelist pastor Angus Buchan has cancelled his planned meeting with an emphasis on the so-called "Jewish and Afrikaans nations" after he was met with an angry backlash over his statement that only these groups shared a "covenant" with God.

"Being a farmer myself and experiencing one of the worst droughts in sub-Saharan Africa and the damage it caused has broken me. My sole intention was to alleviate their suffering.

"My utterances are truly regrettable I am sorry, I am asking for forgiveness and I hereby repent," Buchan told the media at a briefing in Centurion on Tuesday afternoon.

The Christian Leaders Forum to brief the media after a meeting with evangelist Angus Buchan. Buchan made headlines following his remarks, captured in an audio recording, that only Jewish and Afrikaans people shared a covenant with God @TeamNews24 . pic.twitter.com/mRBQxHoZJG

The Christian Leaders Forum, together with Buchan, briefed the media following an extensive meeting regarding the evangelist pastor's statement.

"We have been behind the scenes questioning, seeking answers for two hours from Angus. We were able to come up with a solution and to hear from him," Reverend Chris Mathebula said.

Buchan apologised once again to the country and denounced any idea of a "special nation".

Buchan made headlines last week for his remarks, captured in an audio recording, that only Jewish and Afrikaans people shared a covenant with God, News24 reported.

The audio clip was shared by EFF deputy president Floyd Shivambu on his Twitter page of Buchan convening a prayer meeting called "Staan op vir Jesus" (stand up for Jesus).

A racist Boer Pastor Angus Buchan says it’s only the Boers & Jews who have a covenant with God,& he’s convening a predominantly Boers meeting in Loftus Rugby Stadium in February 2020. You can wish whatever you want Afrika, but these people don’t want us. pic.twitter.com/CwkvHjbOQF

The meeting was planned to take place at Loftus Versfeld Stadium in Pretoria in February 2020.

Buchan said that the "emphasis" of this particular meeting would be "on the Afrikaner nation".

"Everybody is welcome as always to our meetings but this time the emphasis will be on the Afrikaner nation, we are going to call out to God remembering that only two nations in the world have ever been in covenant with the God of Abraham, Isaac and Jacob. They are the Jewish people and the Afrikaans people, that is fact.

"We are going to call a meeting in Pretoria, booked a stadium on the 1st of February 2020. You really need to start praying towards that now, we don’t have much time, we are praying for a change. God will use that meeting to bring the sacredness of the bible and its principles back to South Africa, where people will understand that the word of God is literal from Genesis to Revelations, it is not a general guideline and all the principles in the bible must be adhered to if this country is going to prosper and it is going to prosper because we are going to repent as a nation.

"We will be inviting all the heads of state, they will be there. We are believing for God to intervene, please send this message out everywhere."

Buchan has since cancelled the prayer meeting.

The evangelist pastor left the media briefing quickly, without taking any questions from the media.

We live in a world where facts and fiction get blurred
In times of uncertainty you need journalism you can trust. For 14 free days, you can have access to a world of in-depth analyses, investigative journalism, top opinions and a range of features. Journalism strengthens democracy. Invest in the future today. Thereafter you will be billed R75 per month. You can cancel anytime and if you cancel within 14 days you won't be billed.
Subscribe to News24
Related Links
Christian group to brief media following meeting with Angus Buchan over controversial 'covenant'...
Angus Buchan apologises for saying only 'Jewish and Afrikaans people' have 'covenant with God'
Next on News24
BREAKING NEWS LIVE | Mpho Phalatse ousted as City of Johannesburg mayor, ANC puts up candidate to take over