IN PICTURES | The ANC, proudly sponsored by Bosasa

Whatever the ANC and its leaders desired or needed, the former Bosasa - now know as African Global Operations - was there to make it happen, a series of photographs revealed.

News24 has obtained new pictures that show just how far the corruption-accused company's deep pockets went to lubricate the company's cosy relationship with the ruling ANC over many years. Despite a cloud of corruption allegations looming large over Bosasa and its executives, leaders in the ANC seemed to have no qualms about having dealings with them.

Last week, when confronted with a 2014 photo of a Bosasa delegation with him at Luthuli House, former ANC treasurer general Zweli Mkhize confirmed that Bosasa had donated "directly and in kind" to the ANC.

It is understood the donations, conservatively estimated by a Bosasa insider to be R40m, span nearly two decades between 2000 and 2019.

This is against the backdrop of continuous media reports detailing corruption at the highest level, involving Bosasa and bribes the company allegedly paid to former correctional services commissioner Linda Mti and former chief financial officer for the prisons department Patrick Gillingham. In 2009, the Special Investigating Unit (SIU) finalised an investigation into four tenders awarded to Bosasa by the correctional services department between 2004 and 2005. It found evidence that Mti and Gillingham had been bribed to award these tenders to the company.

Initially, the contracts were worth around R1.5bn, according to the SIU report finalised in 2009.

The new photographs, compared with those already published by News24, suggest the relationship between the ANC and Bosasa was far closer and more beneficial than what the ruling party would have the public believe. It is not clear when the picture above was taken. However, it is accompanied by pictures of Bosasa staff preparing sandwiches in bulk and pictures of large stacks of the same take-away containers believed to have been taken inside the kitchen at the Lindela Repatriation Centre.

The state capture commission of inquiry has heard evidence by former Bosasa COO Angelo Agrizzi about how the company had bankrolled ANC rallies and events for years. While Bosasa director and spokesperson Papa Leshabane professes not to enjoy the game of golf, he had no qualms about pushing aside his dislike for the sport to attend a Bosasa-sponsored golf day for the ANC in North West, held at Sun City. The group is standing behind an ANC banner, with the Bosasa Group logo visible in the bottom right corner. (Supplied) A closer look at the picture shows North West Premier Supra Mahumapelo (second from right) with Papa Leshabane (back left) dressed in an ANC shirt with a Bosasa cap. (Supplied) Last year, News24 revealed the existence of a secret recording in which Watson bragged how he would lobby Zuma to appoint a national director of public prosecutions that would protect Advocate Nomgcobo Jiba, whom Bosasa had allegedly bribed with cash payments every month for years.

Jiba has denied the allegations.

Along with the recording, News24 published pictures of Zuma snapped during a four-hour visit in April 2015, on a Saturday morning the day before his birthday. Bosasa allegedly sponsored the Jacob Zuma Foundation to the tune of  R300 000 a month, Agrizzi revealed during his testimony.

In exchange, Watson allegedly pushed Zuma to intervene at the National Prosecuting Authority and the Hawks to ensure that the corruption probe against Bosasa executives, based on the SIU investigation, would stall. Former president Jacob Zuma is pictured here in an executive chef’s white jacket, embroidered with the Jacob Zuma Foundation and Bosasa logos, as well as Zuma’s clan name ‘Nxamalala’.  News24 could not establish the names of the three chefs pictured with Zuma, but understands this was taken during one of the birthday bashes Bosasa sponsored for the then president. (Supplied) 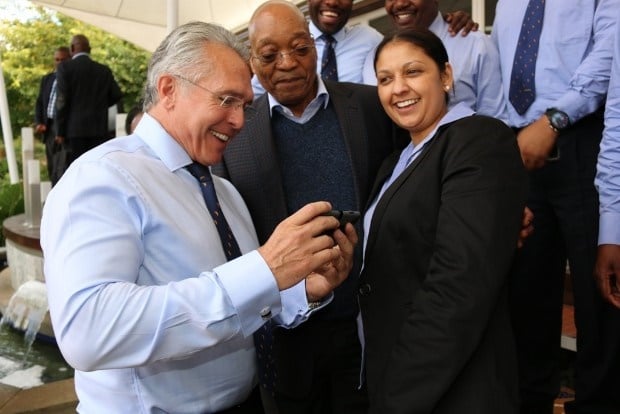 Bosasa CEO Gavin Watson, who was recorded bragging about how he planned to lobby former president Zuma (centre) over the appointment of an NDPP, is pictured here showing Zuma something on his phone as Bosasa director Jackie Leyds looks on. This was snapped during Zuma’s visit to the Bosasa head office in Krugersdorp a day before his birthday in April 2015. (Supplied)

On Wednesday, News24 reported that Bosasa had sponsored 'war rooms' for the ANC's use during campaigns in the past three elections.

According to Bosasa sources, former communications minister Dina Pule was in charge of managing the war rooms on behalf of the ANC at Bosasa's Krugersdorp offices.

Pule was approached for comment on Tuesday, but read and ignored text messages.

Here Pule is pictured at Bosasa offices in an undated photograph: On the same occasion, this picture of Pule with former Bosasa chairperson Joe Gumede was also snapped. The woman on the far right could not be immediately identified. Former communications minister Dina Pule with Bosasa director Trevor Mathenjwa during an event at Bosasa offices. News24 was unable to verify the identity of the woman on the right. (Supplied)

A Bosasa insider revealed that the war rooms cost about R2m per election. The one for the 2014 national election included a screen wall with a live election results map, and at least 30 cubicles equipped with telephones and computers for the use of volunteers.

WATCH: Inside the ANC’s election ‘war room’- proudly brought to you by Bosasa

We live in a world where facts and fiction get blurred
In times of uncertainty you need journalism you can trust. For only R75 per month, you have access to a world of in-depth analyses, investigative journalism, top opinions and a range of features. Journalism strengthens democracy. Invest in the future today.
Subscribe to News24
Related Links
WATCH: Inside the ANC's election 'war room' – proudly brought to you by Bosasa
Bosasa employees return to work
R10m Bosasa contract with Zondo inquiry irregular
Next on News24
LIVE | Covid-19 in SA: 62 new deaths as cases hit 2 920 581