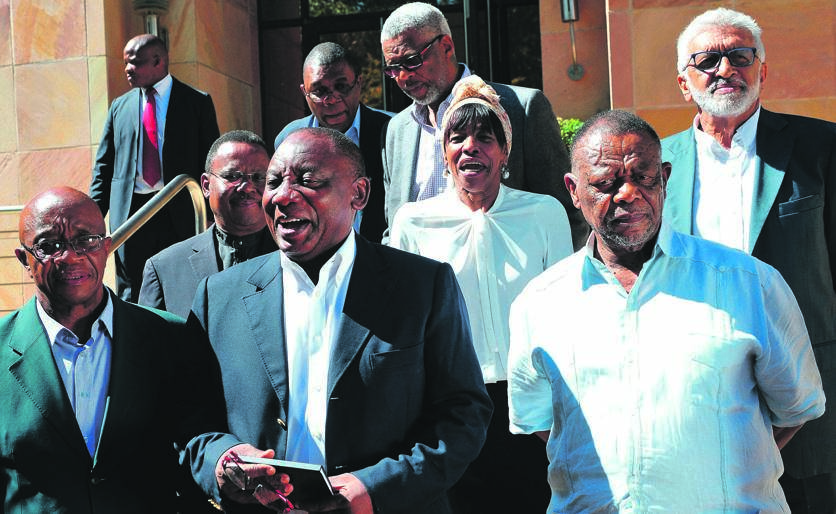 While ANC leaders often face criticism for putting the party ahead of the country's economic and social well-being, the ANC Veterans League says it will take a strong ANC to save South Africa.

In an interview with News24 on Monday, Veterans League president Snuki Zikalala said the party's infrastructure needed to be firmed up for it to play a more effective role in ensuring that the government delivers when it comes to the party's policies and promises.

"The secretary general's office (SGO) is not as coherent as it should be … That's the driver, the engine of the organisation. Immediately when we get the SGO correct I think things will go smoothly," said Zikalala.

Nel is now the co-ordinator of the party's NEC and national working committee (NWC).

"All we know is since Andries came in to help, things are getting better and structured and now, as veterans, we have hope," said Zikalala.

"When we go there, things are not all over the place. We now have well-written documents and a proper agenda and are now able to follow what is happening," he said.

Zikalala said his views on the secretary general's office were not focused on Magashule but on an office that is "critical" to the functioning of the ANC.

Magashule and the Veterans League clashed recently. The former Free State premier allegedly slammed the party's elders in a report to the NEC for ill-discipline and behaving like "ordained commentators".

It claimed it was an attempt to divert attention away from those implicated in corruption and state capture.

Magashule has been implicated several times at the state capture commission of inquiry, most recently by one of his former MECs in the Free State, Mxolisi Dukwana.

Speaking in the Free State on the sidelines of an ANC event last week, Magashule said he was not worried about Dukwana's allegations.

"The issue of [the] Zondo commission and Dukwana, I think for me, it's not an issue. Let's hear what Dukwana says, but Dukwana has said a lot of things ... He talked about a new city and told the commission then that he did not sign any documents. And we have documents which show he has signed; his signature is attached," Magashule told the SABC.

Zikalala said he personally felt Magashule was not used to "objective criticism".

"He comes from the Free State where he was the alpha and omega. All of a sudden, he is in Gauteng and he gets challenged and told things can't be done this way or that [way]. Some things aren’t taking the movement forward… I think those are the things he is battling with, but I think he will overcome it," said Zikalala.

Veterans League not at utmost best

Zikalala, who stressed that the league had the authority to intervene if it felt the ANC was compromised and its policies were not being implemented, said it could play a more effective role in the organisation.

He said veterans were supposed to be part of all the governing party's subcommittees, not only for intervention but to have experienced leaders giving guidance on how the ANC must approach certain issues.

"You find in our provinces that our structures are not strong. The leadership that is there does not intervene authoritatively on all issues affecting the organisation; North West is the exception," he said.

Zikalala said the Veterans League in the North West had been instrumental in the fall of former premier Supra Mahumapelo and that it often called him ahead of NWC or NEC meetings to raise particular issues relating to the province.

Integrity commission can do more now

The commission, which called on several leaders to appear before it ahead of their appointment to Parliament, was criticised for relying on media reports to hold members accountable.

The commission also no longer has to wait for leaders to be referred to it, as it has the power to call those it believes compromised their own or the party's integrity.

"We agreed that the commission should have more powers, be more capacitated and have people who can do investigations," said Zikalala.

He said the work that was being done to strengthen some structures in the ANC was not being done to protect current ANC president Cyril Ramaphosa but out of fear that if nothing was done, the movement would be dead within 10 years.

He said there was "nothing wrong" with Mboweni putting out a discussion document on economic growth and bringing stability to the country's economy.

"Tito, while in office, doesn't represent the ANC. He represents the country. He is supposed to bring economic growth and stability. That's his job," said Zikalala.

Labour federation Cosatu labelled the minister "rogue", while the SACP, which is yet to thoroughly pronounce its views on the economic paper, said it had "serious concerns".

"They rushed to judge Tito, calling him rogue just because a document is there. They didn't come up with alternatives. He also didn't say I am implementing it. If he did, that would be something else," said Zikalala.

The Veterans League president added that alliance partners should just have sought to take Mboweni head-on over the document but said such a document should not be dealt with behind closed doors because it is about the future of society.

We live in a world where facts and fiction get blurred
In times of uncertainty you need journalism you can trust. For 14 free days, you can have access to a world of in-depth analyses, investigative journalism, top opinions and a range of features. Journalism strengthens democracy. Invest in the future today. Thereafter you will be billed R75 per month. You can cancel anytime and if you cancel within 14 days you won't be billed.
Subscribe to News24
Related Links
ANC has every right to mourn Watson, but don't ignore his stains - Snuki Zikalala
Snuki Zikalala: Ramaphosa's integrity 'dented' over handling of Watson donation - he 'has to grow...
ANC Veterans League acting like 'ordained commentators' - Ace Magashule
Next on News24
LIVE | Covid-19 in SA: 3 274 new cases