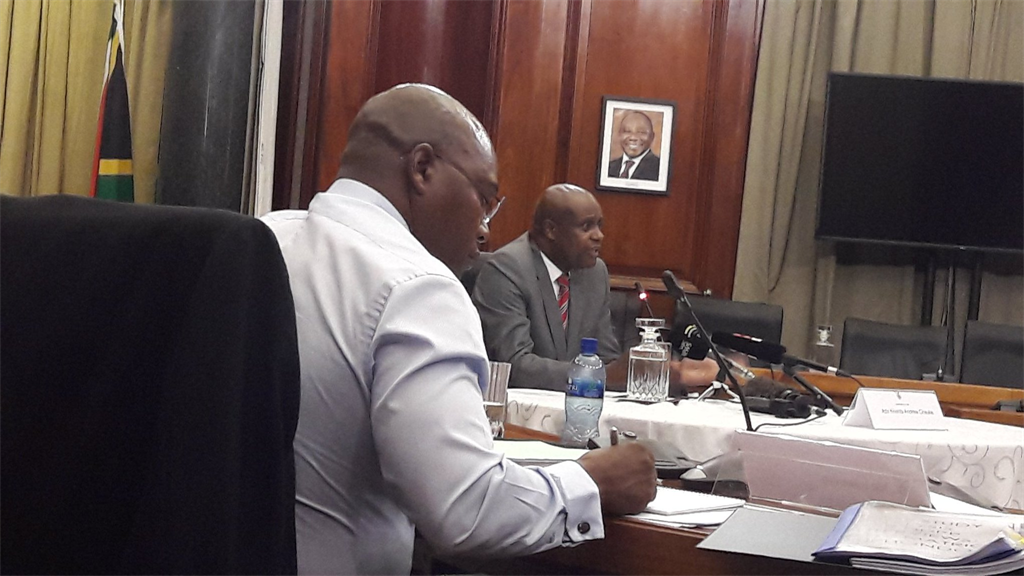 Andrew Chauke, the South Gauteng director of public prosecutions, was grilled during his interview on Wednesday as his past decisions came under fire from the panel tasked with recommending a new National Prosecuting Authority (NPA) head to President Cyril Ramaphosa.

Chauke, who was the fifth person to be interviewed by the panel, did not have it easy during his interview as he was quizzed about his handling of a case which involved controversial figure and former head of Crime Intelligence Richard Mdluli in relation to the murder of Oupa Ramogibe in 1999.

In 2012, Chauke made a decision to provisionally withdraw murder and related charges against Mdluli.

However, civil organisation Freedom Under Law took the matter to court. The Supreme Court of Appeal (SCA) ultimately overturned a decision by the High Court that the murder charges should be reinstated against Mdluli.

The SCA essentially gave Chauke two months to decide which charges to reinstate. He decided Mdluli would face kidnapping, intimidation and assault charges instead of murder.

"There is evidence and a case for him (Mdluli) to answer," he said. Chauke said the matter was first an inquest and the charges were provisionally withdrawn. He said the prosecution team convinced him to proceed with the other charges but not the murder charge.

He stood by his decision, telling the panel that he would still make the same decision today that he had made back then when he withdrew murder charges.

Mdluli and his co-accused are expected back in the South Gauteng High Court in Johannesburg on Monday.

Chauke was also questioned about his business interests and how it would be perceived by the public that he had been nominated by two business people. Chauke said he was involved with a registered company but it was not operational.

Chauke also spoke about factions within the top structures of the NPA.

During her interview, Makhari described the "highs and lows" she encountered during her time at the NPA as well as the roles she played.

'You have to earn respect'

"Trust and confidence [were] eroded. I don't want to insinuate that someone did something wrong, but the institution was no longer the institution it was in 1998," she said.

"It appears our country has lost confidence in us. The respect that we enjoyed back then has been eroded," Makhari said.

"You can't demand to be respected, you have to earn that respect."

Makhari said the panel should ensure that whoever they recommend to the president is a great leader.

"You are a leader because you are in a position of power," she said.

She, however, told the panel that she was aware that her lack of experience in a High Court may be viewed as a shortfall.

Makhari also told the panel that she had been nicknamed "The Dragon Lady" and that no one had tried to interfere with her, adding that she was known to be strict.

"Yes, I understand that some people may perceive a person that has not been at the High Court as not being able to lead, but what we need right now is someone that will lead the institution."

The panel also interviewed advocate Matric Luphondo who has been the chief prosecutor in Pretoria for well over a decade.

Luphondo is held in high esteem by his colleagues in the capital city and has avoided controversy while in the position. He is considered a solid candidate for the top job.

Luphondo told the panel that the work of the National Director of Public Prosecutions had been some kind of "regular target" for politicians.

He presented himself as a man with a clear plan and vision for the NPA. For every question that was posed to him, Luphondo had practical examples of cases that he had dealt with.

He also assured the panel that he had had the opportunity to manage a number of his peers.

"I have the respect of my peers," he said.

"The lesson I have learnt is that sometimes I have to take a person by the hand."

He said should he be appointed for the job, he would ensure that cases such as the one of suspended prosecution boss Nomgcobo Jiba were put to rest.

We live in a world where facts and fiction get blurred
In times of uncertainty you need journalism you can trust. For only R75 per month, you have access to a world of in-depth analyses, investigative journalism, top opinions and a range of features. Journalism strengthens democracy. Invest in the future today.
Subscribe to News24
Related Links
NDPP interviews to be open to the media
Why President Ramaphosa wants NDPP interviews held behind closed doors
'I can assure the panel I am very independent' – advocate Mapoma says during NDPP interview
Next on News24
LIVE | SA hits 1 412 986 Covid-19 cases as death toll climbs to 40 874