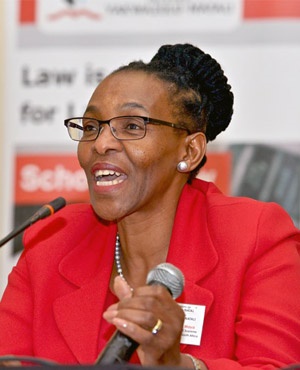 The Judicial Service Commission (JSC) has recommended three candidates for vacancies on the Supreme Court of Appeal (SCA) Bench in Bloemfontein.

On Tuesday, Molemela appeared confident during her interview.

Molemela, who previously acted in the SCA, admitted she had experienced some challenges, but said she wanted to be part of the Bench so she could become part of the solution.

Molemela previously handed down a judgment that barred ANC branches in the Free State from attending the national elective conference in December 2017, after the party's provincial conference was nullified.

She ruled that the Free State conference and its resolution were unlawful and void.

Makgoka has also acted in the SCA.

During his interview on Monday, he commended SCA President Mandisa Maya for bringing about change, but he pointed out that his colleagues there were not always welcoming.

Schippers is known for a judgment he delivered in 2014 in which he ordered that former SABC head Hlaudi Motsoeneng be suspended for 60 days, pending a disciplinary hearing into his alleged misconduct.

In October 2015, the SCA upheld Schippers' ruling. However, it rejected the part of his ruling in which he said former public protector Thuli Madonsela's rulings were not binding.

Nine shortlisted candidates were vying for three positions on the SCA Bench. They were interviewed at the Office of the Chief Justice in Midrand, Gauteng.

The JSC also recommended all three judges who were shortlisted for vacancies in the Competition Appeal Court positions.

Following deliberations, the JSC announced that it would recommend the three to President Cyril Ramaphosa.

The commission also announced it would recommend Ms Sungaree Pather to be a member of the Electoral Court. Two people were interviewed for this position.

The JSC interviews continue on Thursday.

We live in a world where facts and fiction get blurred
In times of uncertainty you need journalism you can trust. For only R75 per month, you have access to a world of in-depth analyses, investigative journalism, top opinions and a range of features. Journalism strengthens democracy. Invest in the future today.
Subscribe to News24
Related Links
Judge Colin Lamont withdraws application for appeals court position
JSC interviews to start this week
The dark world of judicial politics
Next on News24
LIVE | SA Covid-19 death toll at 50 271 as the number of cases now sit at 1 514 815