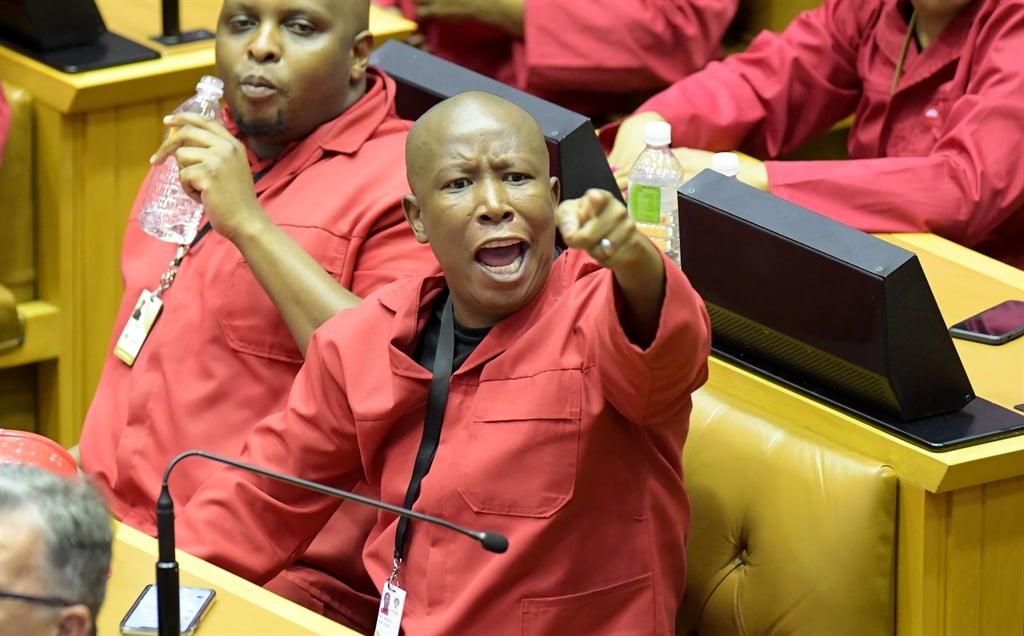 Just because two people divorce, didn't mean they never loved one another.

This was how EFF leader Julius Malema described the party's recent onslaught against Public Enterprises Minister Pravin Gordhan, having initially defended Gordhan a few years ago.

On Thursday, the EFF stalled proceedings at the State of the Nation Address (SONA) for over an hour while they repeatedly called for the removal of Gordhan from President Cyril Ramaphosa's Cabinet. They also demonstrated against the presence of apartheid-era president FW de Klerk at the event.

But it was at the end of 2016 when Malema's party actually called on South Africans to support then-finance minister Gordhan amid the so-called SARS rogue unit charges and alleged there were plans to force Gordhan out as head of Treasury.

READ: If Gordhan is sacked, ministers must quit - EFF

Speaking at a South African Press Club event in Cape Town on Friday, Malema remained steadfast that there was nothing wrong with being Gordhan's biggest detractors now, despite having once fought for Gordhan and taking to the streets in his defence.

Comparing it to a relationship, Malema said just because they once said Gordhan was correct, didn't mean they should keep quiet when he did wrong, in their minds.

"There are people who loved each other before, and then divorced. [It] doesn't mean they don't love each other," he said of the complex relationship.

Malema said back then, the fight was because Gordhan was targeted allegedly in order to allow the controversial Gupta family to get their hands on the state's coffers.

Malema also took aim at De Klerk, who was in the public gallery at SONA on Thursday. De Klerk has regularly attended past SONAs when the EFF was also present.

When asked why they attacked De Klerk this year, Malema defended their actions, claiming to have been provoked by De Klerk's recent utterances.

De Klerk caused anger last week when, during an interview with the SABC, he seemingly refused to accept that the system of apartheid, while agreeing it was horrid, was a crime against humanity comparable to genocide.

The United Nations declared apartheid a crime against humanity.

"We were told to reconcile, we must forgive and forget and all along Mr De Klerk was making his way into Parliament. We thought it was that process of reconciliation, but for him to come and show us the middle finger and say to us apartheid was not a crime against humanity means this person has no remorse," Malema said.

"It means he doesn't deserve a place in a democratic parliament and a democratic South Africa," remarked Malema.

Speaking of past SONAs, Malema further said De Klerk made no such remarks during former presidents Thabo Mbeki and Jacob Zuma's tenures.

Mbeki was present at Ramaphosa's SONA on Thursday, while Zuma is believed to be sick and receiving treatment abroad.

We live in a world where facts and fiction get blurred
In times of uncertainty you need journalism you can trust. For 14 free days, you can have access to a world of in-depth analyses, investigative journalism, top opinions and a range of features. Journalism strengthens democracy. Invest in the future today. Thereafter you will be billed R75 per month. You can cancel anytime and if you cancel within 14 days you won't be billed.
Subscribe to News24
Related Links
WATCH LIVE | Julius Malema addresses the Press Club of South Africa
WATCH | 'The EFF touches the untouchable': Malema defends walk-out
'That's how it's going to roll': EFF gears up for SONA rumble
Next on News24
LIVE | Covid-19 in SA: 4 074 new cases