Members of the SANDF patrolling during unrest.
Alet Pretorius/Gallo Images

The State Security Agency (SSA) has denied a Promotion of Access to Information Act (PAIA) request from DA leader John Steenhuisen, for intelligence reports relating to the civil unrest in SA in July to be made public.

"The agency has duly denied the request because due processes by both the Office of the President and Parliament are under way to investigate the circumstances leading to the unrest and to assess the response of government to the unrest," SSA spokesperson Mava Scott said on Wednesday.

"We have made submissions to the Joint Standing Committee on Intelligence regarding all of this, and the DA is represented in the committee," Msimang added.

Msimang also rubbished the DA's claim that the SSA was hiding information as one that was without substance and meant to create unnecessary panic and suspicion.

"South Africa must await the Parliament review process and the outcome of the president's expert panel on these matters," Scott said.

News24 previously reported that Cele said he did not receive the report, which his colleague, then State Security Minister Ayanda Dlodlo, spoke about.

A week before, Dlodlo said:

That information we received, that we analysed and packaged, was handed over to the police.

She vehemently denied assertions that intelligence had not been given to the police to quell the unrest, News24 previously reported. After to the unrest, Dlodlo was removed as the Minister of State Security.

In a statement on Tuesday, the DA said it was not satisfied with the SSA's decision.

"The decision to hide behind Section 10 of the Intelligence Services Act and Section 44 of PAIA - is cowardice and highlights the state's desire to continue to keep the veil of secrecy around the catastrophic events in July," DA MP Dianne Kohler Barnard said.

READ | #UnrestSA: Bheki Cele says he did not receive an intelligence report from Dlodlo, SSA

"It is this very level of secrecy the High-Level Review Panel report decried, and obviously the reports would have been redacted to protect the names of operatives, sources and other sensitive information."

"However, complete transparency is required in terms of who knew what and when as well as how our security cluster twiddled their thumbs as KwaZulu-Natal's industries and livelihoods went up in flames."

The DA remained resolute that the information was in the public interest and that South Africans should know the report's contents and any intelligence information related to the unrest.

"If the State is already hiding information on the intelligence reports surrounding the violence in the two provinces, we can be almost certain that the parliamentary inquiry into these events will merely be an attempt to whitewash the ANC’s failures."

For eight days, South Africans witnessed widespread looting, damage to property and violence that claimed the lives of more than 300 people in KwaZulu-Natal and Gauteng. Around 180 malls, shopping centres, warehouses and factories were gutted, along with 161 liquor outlets and distributors. 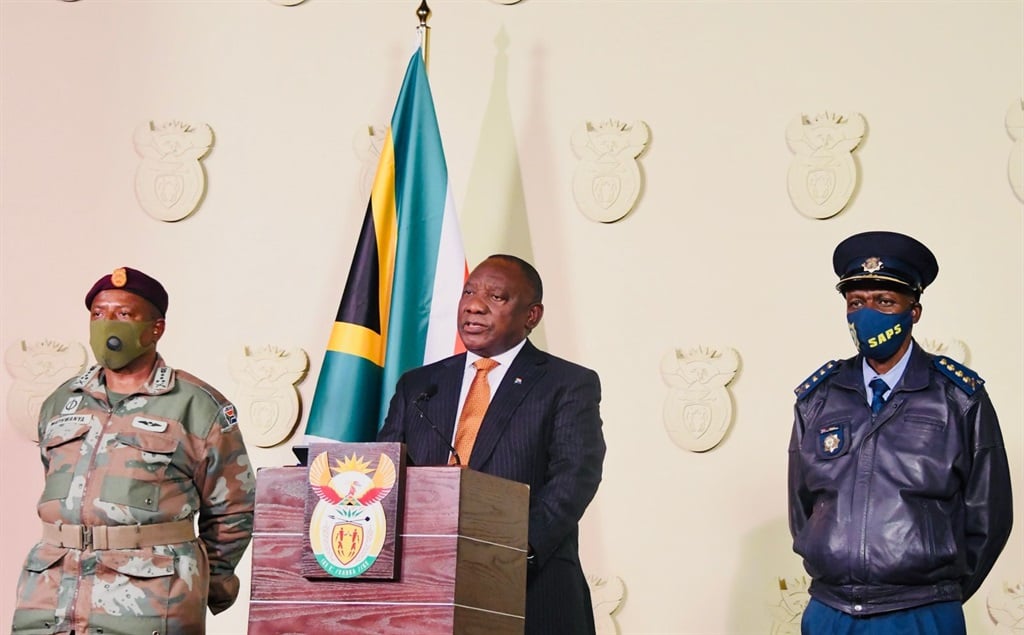 President Ramaphosa addresses the nation during the July unrest.
GCIS

It was estimated that the destruction cost the country billions, according to President Cyril Ramaphosa.

Ramaphosa also said the unrest was a planned attack on the country.

During an address to the nation on 16 July, he said:

It is clear now that the events of the past week were nothing less than a deliberate, coordinated and well-planned attack on our democracy. The constitutional order of our country is under threat.

Ramaphosa went as far as saying that the looting and violence was "a smokescreen to carry out economic sabotage through targeted attacks on trucks, factories, warehouses and other infrastructure necessary for the functioning of our economy and the provision of services to our people".