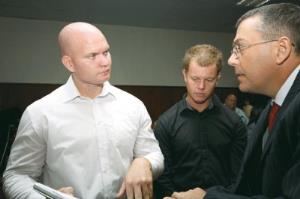 Blayne Shepard (left) and his brother Kyle speak to their lawyer Jacques Botha in the Durban Regional Court.
Supplied

A man convicted of culpable homicide for killing former British Royal Marine Brett Williams during a brawl at Durban's Kings Park rugby stadium in 2013 has had his conviction overturned and replaced with assault with intent to do grievous bodily harm.

The assault on Williams – who was on a brief visit to the city – was largely sparked by his own conduct. Evidence in the trial court established that he had been aggressive and provocative during the rugby match that evening and later at bars in the stadium precinct.

During the final altercation, the State alleged, Shepard, his brother, Kyle, and some of their friends set upon Williams, viciously stomping on him and kicking him.

A bald Shepard, who was wearing a bright pink T-shirt, was identified.

In the original trial, in which there were three other accused, Durban Regional Court Magistrate Trevor Levitt had to determine how Williams died and who, if anyone, was directly responsible. Levitt also was also faced with conflicting medical evidence and contradictory eyewitness testimony.

In the end, all accused but Shepard were acquitted.

In his appeal, Shepard maintained there was simply not enough evidence to convict him.

"Proving a case beyond a reasonable doubt is an onerous burden," Judge Pillay said in her ruling handed down on Friday.

"There is no duty on an accused to prove his innocence. He merely has to give an explanation which is reasonably possibly true."

She said the trial magistrate had evaluated the evidence correctly, pointing out that evidence cannot be considered in isolation but must be considered collectively and, in this case, "a picture emerged which fits like a hand into glove".

She said the accused had not fared well under cross-examination and had "feebly" attempted to distance himself from any involvement in the assault.

"But there was a golden thread among some of the witnesses...that a big-built bald man in a pink shirt was seen kicking at the deceased's upper torso. It was common cause that he fitted that description…so the finding that he participated in the assault cannot be faulted."

What was lacking, the judge said, was medical evidence which established that Williams had died from being kicked and stomped on the head and upper body, rather than from falling and hitting his head on a trailer parked in the vicinity.

Medical experts said they would have expected to see injuries consistent with "aggressive kicking and stomping" but there were none.

"His white T-shirt bore no evidence of a shoe or other marks...there were no rib fractures or extensive bruising. The only significant injury was to his skull.

"There was no clear or credible evidence on exactly when or how he fell.

No 'purpose' in sending him to jail

"However, what has been established is that the accused was kicking him, and kicking someone with a booted foot is likely to cause serious injury. I am satisfied that an intent to do grievous bodily harm was proved beyond a reasonable doubt."

Regarding sentence, Judge Pillay said while anger against perpetrators was understandable, the courts had to be balanced when meting out sentence.

"In my view, no purpose will be served by sending him to jail.

"His actions require a measure of censure, but given his age, it strikes me that the positive intervention which correctional supervision offers is preferable to a fine or suspended sentence."

Conditions he will have to adhere to include house arrest, 16 hours of community service every month, attending programmes and not using drugs or alcohol.