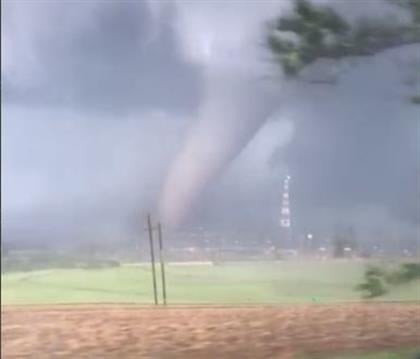 The tornado which whipped through KZN on Tuesday. (Twitter)

A severe thunderstorm that produced a tornado near New Hanover on Tuesday is among 17 which has ripped through parts of South Africa in the last decade.

At least two people were killed and 20 injured in the storm, which the SA Weather Service (SAWS) was investigating to determine the tornado's strength in relation to the Enhanced Fujita (EF) scale.

Over the past 10 years, 16 other tornadoes have been recorded, SAWS spokesperson Hannelee Doubell told News24.

This year alone, one had swept through Bainsvlei in Bloemfontein in May, while a small tornado was reported in Sedgefield, the Western Cape, in September.

Tornadoes were not such an uncommon phenomenon, Doubell said, especially in the KwaZulu-Natal Midlands and Eastern Cape, where they occur more frequently.

The most ferocious of weather events, a tornado was a "violently rotating storm of small diameter" which developed from thunderstorms, she explained.

"The maximum wind speed of a tornado is usually between around 120 and 360km/h, but can even be stronger than 432km/h. The pressure in the funnel is considerably lower than the surrounding atmospheric pressure," Doubell said.

"The damage to property is normally caused by the strong winds, particularly when they blow stronger than 144km/h. Pressure differences between the inside and outside of the tornado are also partially responsible for damages, particularly to buildings whose windows and doors are closed.

"When a tornado moves across such a building, the pressure within the building is considerably higher than the pressure on the outside. A difference of 69hPa causes a pressure on a ceiling of 3x3m that is equivalent to the weight of a mass of more than 6 000kg. Such a weight can cause extensive damage and in certain cases the whole roof of the building can be lifted, or the walls pushed outwards."

Doubell said an interesting aspect of tornados was the loud distinctive noise they make.

"People who have heard it have described it as the sound of 'a thousand trains', 'the buzz of millions of bees' or 'the rumble of jet planes'."

News24 reported on one of the more recent major recorded incidents which occurred two years ago, when over 50 people were injured when a twister stormed through the Vaal Marina in Gauteng on December 11, 2017.

About 300 homes were damaged or destroyed.

The worst tornado recorded since 2000 also occurred in KwaZulu-Natal when eight people were killed in Molweni on November 14, 2008. Following the disaster, which left about 200 people injured, a pregnant woman who had been hurled against a wall had miscarried, while a man lost his leg as a result of injuries sustained, The Witness reported at the time.

The most deadly tornado to hit the country saw 26 people killed and hundreds injured in the Eastern Cape areas of Mount Ayliff and Thabankulu on January 18, 1999. It was rated F4 on the Fujita scale.

Only a month earlier, President Nelson Mandela escaped unharmed when a tornado, which resulted in 11 deaths, swept through Umtata.

He had reportedly been in a pharmacy while on holiday in his hometown of nearby Qunu.

The Associated Press reported the windows and doors of the pharmacy had shattered as the storm raged and part of the roof had caved in.

His guards had covered him with their bodies to protect him.

We live in a world where facts and fiction get blurred
In times of uncertainty you need journalism you can trust. For 14 free days, you can have access to a world of in-depth analyses, investigative journalism, top opinions and a range of features. Journalism strengthens democracy. Invest in the future today. Thereafter you will be billed R75 per month. You can cancel anytime and if you cancel within 14 days you won't be billed.
Subscribe to News24
Related Links
KZN govt expects tornado damage to run into the millions
Tornadoes in South Africa are likely to grow more common – as thunderstorms grow more severe
KZN tornado: Eskom fixing network after fatal storm leaves 15 000 without power
Next on News24
LIVE | Covid-19 in SA: Cases rise by 842

Here are the Daily Lotto numbers
Full list of lottery results
Voting Booth
Are you going to keep wearing a mask following the announcement that it is no longer required under law?
Please select an option Oops! Something went wrong, please try again later.
No ways, I'm done
5% - 6229 votes
Yes, I still want to be cautious
90% - 107564 votes
Only certain circumstances
5% - 5545 votes
Previous Results
Podcasts
PODCAST | The Story: We unpack the Eastern Cape tavern tragedy