Traditional healer Mkhulu Zama Ndebele sitting inside his indumba [shrine] ahead of a consultation.
Nomvelo Chalumbira

The University of KwaZulu-Natal (UKZN) and the Durban University of Technology (DUT) have teamed up to establish the potential of medicinal plants in the fight against Covid-19.

The research project includes scientists from both institutions joining forces to identify bioactive compounds from South African plants that could potentially be effective in the treatment of the virus.

"SARS-CoV-2 has triggered a recent pandemic of respiratory disease now called COVID-19 with no specific antiviral drug or vaccine for the treatment of this pandemic. Most treatment strategies focus on symptomatic management and supportive therapy. As a result, several drug discovery efforts are ongoing for potential treatment agents, with medicinal plants gradually gaining prominence," UKZN said in a statement.

"For the study, the plant species chosen were selected based on their use in traditional medicine for fighting the common cold, flu, respiratory infections, and malaria, among other ailments and diseases," the institution added.

UKZN's Dean and Head of the School of Health Sciences, Professor Mahmoud Soliman together with his doctoral student and laboratory assistant, Clement Agoni found - during the first stage of the study - 29 compounds that are present in South African indigenous plants used for traditional medicinal purposes.

"The process that entailed molecular modelling identified arabic acid, L-canavanine, uzarin and hypoxoside to be 'favourable for the treatment of the virus'," UKZN stated.

According to the leader of the project, the study was the first to scientifically examine South African indigenous plants for treatment against the virus.

"The next stage of the research is underway focusing on the in vitro antiviral activity of the compounds identified as potential inhibitors. If the study secures promising results, further research will be done using animal modules.

"Consequently, these compounds could serve as a starting point for the discovery of a novel SARS-CoV-2 therapeutic," Dr Depika Dwarka of DUT’s Department of Biotechnology and Food Technology said.

Co-leaders in the research project include; DUT’s Professor Jason Mellem and UKZN’s Professor Himansu Baijnath, who is an honorary research professor and past curator of the Ward Herbarium at the School of Life Sciences at the Westville campus.

READ | Covid-19: This is the role traditional medicine practitioners can play - health dept

News24 earlier reported that while there is currently no cure for Covid-19, traditional medicines/indigenous plants are not excluded from the search for treatments, according to the National Department of Health.

Academics previously told News24 that the potential of traditional medicine is not yet know, and will not be until its efficacy is tested through clinical trials. 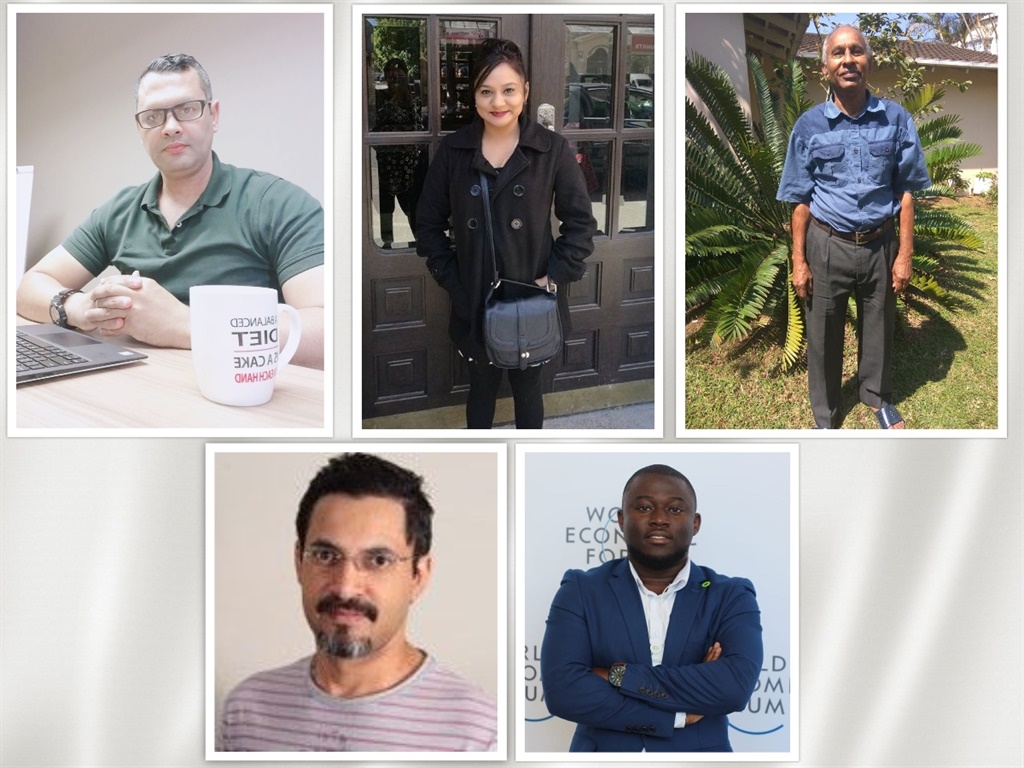 from left- Professor Mahmoud Soliman, Dr Depika Dwarka, Professor Himansu Baijnath, Professor Jason Mellem, and Mr Clement Agoni.
Supplied: UKZN
We live in a world where facts and fiction get blurred
In times of uncertainty you need journalism you can trust. For only R75 per month, you have access to a world of in-depth analyses, investigative journalism, top opinions and a range of features. Journalism strengthens democracy. Invest in the future today.
Subscribe to News24
Related Links
Science and innovation dept to research traditional medicine for Covid-19 fight
OPINION | Countering Covid-19 stigma and misinformation is part of the cure
Home ‘remedy’ dangerous
Next on News24
LIVE | Covid-19: US' first Omicron case detected in traveller from SA