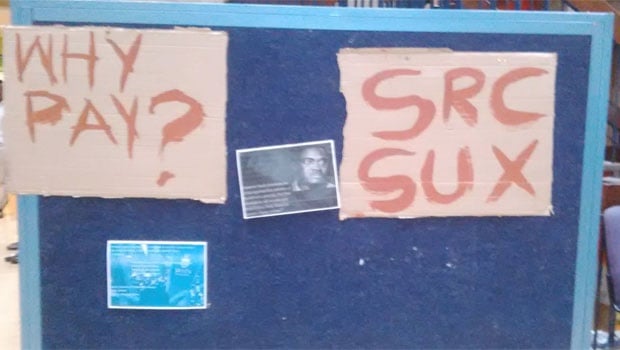 Meanwhile, over at UJ...

Nzimande says that all the students' demands are being dealt with.

Our mandate is to merely ensure that every single academically qualifying child of South Africa has access to higher education and training.

Firefighters at Unisa's Sunnyside campus have put out the fires that were started by protesters, reports News24's Karabo Ngoepe. Over and above the R10bn already committed to higher education through NSFAS, government is pledging another R6.9bn.

Nzimande: More than 212 000 students will enter the university system this year.

He says that in 2016, public universities will provide access to approximately 212 472 new entrants.

Unisa students have shut down the administrative building at the Sunnyside Campus Picture: Supplied. Witnesses have taken to social media claiming that shots were fired as university fee protests continued. One stun grenade was fired about an hour ago to get workers and students to leave, but they have regrouped and are basically not leaving, Mpho, an Economic Freedom Fighters spokesperson at Unisa told News24 reporter Thulani Gqirana.

Wits has closed registration for the day as some students protested over their poorer counterparts being unable to register.

The #FeesMustFall movement will be making a return in 2016 when it occupies the Wits University Solomon House on Monday, the first day of registration, the Wits Student Representative Council (SRC) has said.

In a statement, the SRC said January 2016 saw students confronted with “a similar problem that we faced a year ago”.

“Thousands of young people do not have access to institutions of higher learning despite their academic capabilities in the most challenging circumstances!”

The statement added that the SRC spent the last weeks of last year and the first of this year fully engaged in assisting students.

"Thus this system is designed to systematically exclude the black child. We have seen many students who have had horrific experiences and will ensure that these students are given the adequate support that they deserve to succeed.”

According to the SRC, it raised R4.4m to assist students but said despite the campaign to raise money, “no amount of fundraising can solve the higher education crisis”.

Go to top
We live in a world where facts and fiction get blurred
In times of uncertainty you need journalism you can trust. For only R75 per month, you have access to a world of in-depth analyses, investigative journalism, top opinions and a range of features. Journalism strengthens democracy. Invest in the future today.
Subscribe to News24
Related Links
University of Johannesburg pledges to assist poorer students with fees
Funding for all Gauteng township top achievers
#FeesMustFall campaign back
Next on News24
WRAP | Ramaphosa declares Nelson Mandela Bay hotspot, warns of Covid-19 second wave