AS IT HAPPENED | Worry about the manner 'in which many comrades are dying these days' - Zuma, others bid farewell at #WatsonFuneral

We are now at the Forest Hill cemetery where Watson will be laid to rest. pic.twitter.com/zweJ5qqjZd

The choir now sings as the coffin is carried out of the funeral venue, with the procession and mourners following behind.

The pastor has wrapped up his sermon, and the thanks are now being read out from the podium.

Zuma says "farewell comrade" to "Comrade Gavin...you left too early for us."

Zuma says he always feels very bad to say goodbye to people who are younger than him, but Watson was "indeed a comrade who made a contribution to the African National Congress".

The former president finishes off his address with another song, and this time it's "Umshini wami".

#GavinWatson Zuma says it’s not good for not feel safe you own country. pic.twitter.com/LXic37Mufm

Zuma says his testimony at the Zondo commission had not even scratched the surface, says he could have gone deeper, but he chose not to.

Zuma: "...I hope investigations will clarify this matter. The reasons why I say this, and I don't want to go any further, but South Africa is a strategically important country - geographically, politically, economically, globally."

Zuma is now speaking on enemy agents and says this was not addressed during negotiations after apartheid. "The questions raised was what would they inform on if the war is over. That was simple logic from us. We negotiated in good faith. They refused to let go of their agents."

Zuma: "I've become very worried in the manner in which many comrades are dying these days. Particularly knowing as I do, how some intelligence organisations operate... and I'm hoping that the investigation will indeed prove us wrong, who are worried."

"The report that the family gave me, has a lot of gaps..." says Zuma.

Zuma says he when he met the Watson he was surprised that they spoke vernac and he thought they didn't know the language in depth. I later realised that they were recruited as specialised people who did not look at the colour lines.

Zuma says Watson was one of the few people who came to visit him at his "little home" in Nkandla...

Zuma: We have heard almost everything about Comrade Gavin, what contribution he has made. I've had the opportunity to come and see his operations and what he was doing. I was still president at the time. I was amazed with how advanced the operations were.....

Former president Jacob Zuma walks up to the podium, and starts off by singing "Senzeni Na" before his address. 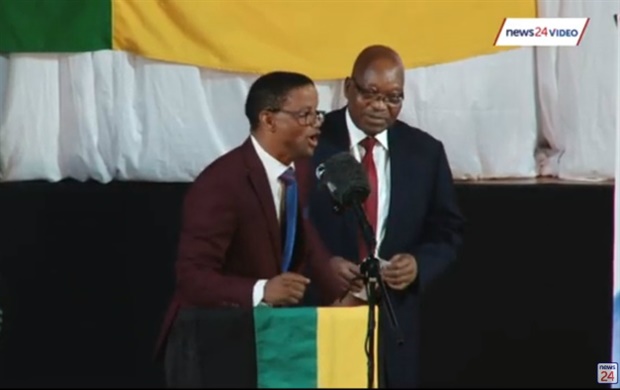 Premier of the Eastern Cape, Oscar Mabuyane says the loss of Gavin Watson is a great loss to the Eastern Cape who is dubbed the home of legends. #Sabcnews #GavinWatsonFuneral pic.twitter.com/oEGBvVexJo

Eastern Cape premier and ANC chairperson Oscar Mabuyane says they are here as the ANC to unashamedly bid farewell to Gavin Watson, "our comrade whose blood was black, green and gold..."

Mabuyane says he is also here on behalf of the provincial executive committee to pay his respects. "Comrade Watson was a brother and father and he was indeed a Comrade. We share your pain. It is sad that we lay him to rest during a time when we have received many reports on....

Jack concludes and says the people who are present here are people whose lives have been touched by Watson either through work or personally. He adds that the family has the muscles behind them.

Jack says he has been sent by others who were in the struggle with him to share and reflect on Watson during the struggle. He says he has known Watson for 25 years. "Watson crossed the line and when he did everybody paid attention".

Mkhuseli "Khusta" Jack says Gavin Watson "loved his country and his people", and describes him as "an individual with his own ideas" who came into the struggle. "With my own eyes, I saw a generous and hard-working person, and a fitness fanatic, in the man..."

Jack: "Together with his brothers, they abandoned the privileges associated with the pigmentation of their skin, to join those who were racially discriminated."

Jack: "When the Watson brothers went to play [rugby] in the townships, BJ Vorster was the prime minister of South Africa, he was in charge of the country..."

Jack: "Gavin, together with his brothers, deserted the racially constructed apartheid rugby and joined the anti-apartheid and non-racial rugby..."

Apartheid activist and PE business man Khusta Jack will also give a message of support. pic.twitter.com/DCcOQSu994

Zuma avails himself for a brief selfie session pic.twitter.com/8Hrtg42SFy

#GavinWatson The crowd is singing and dancing around his coffin pic.twitter.com/6rCoJqdDTk

Mkele says he was shocked when the Bosasa story emerged and Gavin Watson was portrayed as a criminal and thief. There was nothing wrong with Watson helping the ANC, says Mkele.

Mkele: "So what is wrong, for Gavin to support the African National Congress? That's his political party, yes, that's his home... and it's our home."

Rev. Archie Mkele is now at the podium, paying tribute to Gavin Watson, who was "like a brother" to him. Mkele started off by greeting "our president", Zuma.

Mkele elicits laughter from some of those in attendance when he says he helped the Watsons look for wives... Gavin was their big brother, says Mkele.

#GavinWatson Valence Watson calls for the @MYANC to return to what it was in the Nelson Mandela Bay Region. pic.twitter.com/UF9GGKr99S

Valence Watson tells mourners that his brother was dearly loved. Watson goes on to tell the audience that Gavin would have wanted that the Eastern Cape reach its full potential with regards to economic growth.#Sabcnews #GavinWatsonFuneral pic.twitter.com/n6c9cbyVjK

Valence Watson is now at the podium, paying tribute to Gavin Watson. He says God's timing is perfect - he took Gavin when he wanted to take him.

Valence says there was a strong push to hold the funeral in Johannesburg, but Gavin's wife Leigh Ann wanted it in Port Elizabeth.

Valence has been addressing the crowd in both English and Xhosa. A choir performs during breaks between speakers at the #GavinWatson funeral. #WatsonFuneral

Joe Gumede concludes: "Material things did not matter to him...People even vilified him for his belief in God. He made it his passion."

Gavin Watson's daughter, Linzie reads out a letter written by her grandmom to her now late son. @AlgoaFMNews #GavinWatson pic.twitter.com/Im9Vnzc0BA

The legendary Spring Rose Rugby Club also arrived wearing their uniform. The rugby club was part of the union that fought for marginalised black sportsmen to be included in professional sports.

The Watson brothers played a pivotal role in the fight for these men to be recognised for their talent in sports.

Gavin Watson, alongside his brothers, rose to fame through this revolution.

Joe Gumede of African Global is now on the podium and observes all protocol. He sends his condolences to the Watson family. "We have always considered ourselves as one family. The family has made a sacrifice. When Gavin was starting out he would come home every second month." Gavin Watson's son, Roth, is currently at the podium, paying tribute to his father after reading a short obituary. Roth says Watson was a man of faith and loved God, and he started and ended all board meetings with a prayer.

Gavin Watson, who skimmed billions from government tenders, paid off politicians and whose company is now going under thanks to his corruption, is being buried as an ANC cadre, with the state capture don, JZ, in attendance. Very fitting. https://t.co/7vNwFo4CyW

Funeral proceedings are under way.

While some mourners make their way into the hall others are singing. pic.twitter.com/BuArtvsWZE

More scenes from the venue. pic.twitter.com/lhBq5x49C6

The funeral of former Bosasa CEO #GavinWatson is set to start at 11am in Port Elizabeth. The funeral will be held at the Feather Market Hall in Central. @HeraldPE pic.twitter.com/qSr8f1lXC5

Government Zini,who has attended the funeral had this to say about Gavin Watson. #sabcnews pic.twitter.com/ABMEoHxIxZ

Its an hour before the Gavin Watson funeral starts and mourners are now seated waiting for the arrival of the body and the Watson Family. #sabcnews pic.twitter.com/ACTQvPNhH2

Accident reconstruction expert Kondrad Lotter, who was appointed by late Bosasa CEO Gavin Watson's family to investigate his death, said on Monday he was still waiting for information pertaining to certain aspects of the investigation.

Speaking to News24, Lotter added he was aware of the anticipation for the final autopsy report.

He said the investigation, focusing on the car Watson was driving when he died, had been finalised.

However, Lotter added he was still in the process of gathering information. "At this point, it's a waiting game," he said.

READ MORE
Go to top
We live in a world where facts and fiction get blurred
In times of uncertainty you need journalism you can trust. For only R75 per month, you have access to a world of in-depth analyses, investigative journalism, top opinions and a range of features. Journalism strengthens democracy. Invest in the future today.
Subscribe to News24
Related Links
Gavin Watson investigation on death car wrapped up, now it's a waiting game - expert
I will tell you what Agrizzi has done - Mokonyane's threat at Gavin Watson memorial
'Stout kinders' at Bosasa youth centres used to call Gavin Watson 'Tata' - Papa Leshabane
Next on News24
LIVE | Covid-19 in SA: Death toll at 21 378, with 781 941 confirmed cases