I, Matamela Cyril Ramaphosa, swear that I will be faithful to the Republic of South Africa, as it happened 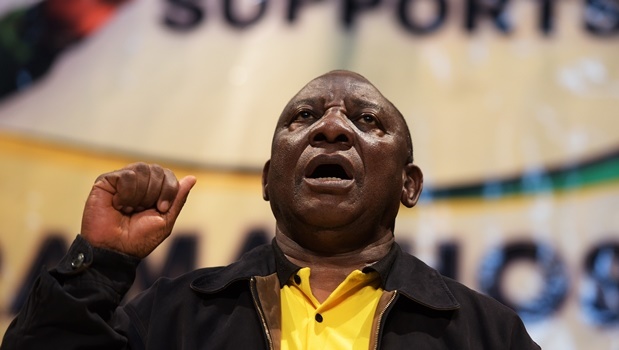 It's my honour and privilege to congratulate the president of the republic of South Africa. #SwearingIn (@PaulHermanCPT) pic.twitter.com/gebFzALgt2

Ramaphosa has been sworn in as President of South Africa.

The presiding officers at #SwearingIn. President-elect still to make his way to briefing room. (@PaulHermanCPT) pic.twitter.com/WC5uaA5qGm

A medical doctor, mother of four and wife of Cyril Ramaphosa, this is one strong, talented woman.

Now that Jacob Zuma has finally resigned and Cyril Ramaphosa is set to become acting president, Dr Mostepe is set to be the new First Lady.

W24 has more on the First Lady

It's a scrum here in the president's briefing room with journalists kneeling on the floor. #PresidentElection #SwearingIn @TeamNews24

Things seemingly ready to go for #SwearingIn of President-elect Cyril Ramaphosa as the president of the republic at 17:00. #NationalAssembly #PresidentElection @TeamNews24 pic.twitter.com/kYTvnCCm1X

An equity guide to Ramaphosa: winners and losers in SA

Equity investors reacted with euphoria to Jacob Zuma’s resignation as South African president, with stocks soaring the most in more than three years.

Cyril Ramaphosa, who was elected as Zuma's successor on Thursday afternoon, is expected to pursue market-friendly policies.

According to a statement released by the Presidency, president-elect Cyril Ramaphosa will be sworn-in by Chief Justice Mogoeng Mogoeng at 17:00 on Thursday, following his election by the National Assembly.

"On your marks. Get set. We are ready for #Ramaphosa," sing ANC supporters outside the #NationalAssembly. #PresidentElection @TeamNews24 pic.twitter.com/Txt4TC1SR4

ANALYSIS FROM PARLIAMENT: Will President Elect Ramaphosa usher in a new SA?

While Jacob Zuma's resignation after his ANC recall means Parliament will no longer have to debate a motion of no confidence, there is still the matter of making official the appointment of Cyril Ramaphosa as the president of the republic.

Cope says that former president Jacob Zuma should have been impeached, rather than being allowed to resign.

And they have no time for incoming president Cyril Ramaphosa, viewing him as someone who, like Zuma, broke his oath of office.

Cope addressed the media on Thursday morning, after Zuma's resignation the night before, and expressed mixed emotions about this event.

Ramaphosa was swamped by opposition MPs who wanted to congratulate him, including DA chief whip @jsteenhuisen who gave him a Cuban cigar! #PresidentElection (@AdriaanBasson) pic.twitter.com/GVG5v5KfFQ

President-elect Ramaphosa waves to the media from the #NationalAssembly floor and gives the thumbs up. #PresidentElection @TeamNews24 pic.twitter.com/tiRlEr0GXR

UDM leader Bantu Holomisa says Ramaphosa must understand that the problems of the country can't be solved by a single political party.

A resident of Nkandla says #ZumaResigns has done a lot for them during his term as president of country and ANC. "Some of us have running water at our homes through him," she said. @TeamNews24

Ramaphosa finishes by promising that he will work hard "not to disappoint the people of South Africa." Standing ovation as he finishes from the public gallery as well. #PresidentElection #NationalAssembly @TeamNews24

Ramaphosa completes his first speech as the president of South Africa to a standing ovation and rapturous applause, from ANC and opposition MPs alike.

It's business as usual in the small town of Nkandla on Thursday after homeboy #ZumaResigns last night. Most people doing grocery shopping while others are at work. @TeamNews24

Ramaphosa calls for respect for Parliament. No more yelling at each other. "When our people see this Parliament, they see themselves represented." He hopes the level of debate improves. #NationalAssembly #PresidentElection @TeamNews24

#PresidentElection Ramaphosa: across party lines we should have an opportunity of sitting together and eating meat - responding to Holomisa @TeamNews24

Ramaphosa says he will outline steps tomorrow in SONA to deal with corruption and state capture. @TeamNews24 #PresidentElection

I have to say it is so different in parliament today, the opposition cordial with President Ramaphosa & in turn polite. A moment to be friendly & joke around. Except of course EFF is not here. The battles might start later but this has been a breath of fresh air @TeamNews24

Ramaphosa delivers a minor rebuke to Maimane. Says he should consider leaving talk of 2019 aside and focus on working together now. "This shouldn't be an opportunity to grandstand." ANC caucus claps. #PresidentElection @TeamNews24

Standing ovation for President-elect Cyril Ramaphosa as he takes to the podium for the first time. #NationalAssembly #PresidentElection @TeamNews24 pic.twitter.com/aQliADx8oB

Ramaphosa responds to messages from opposition leaders. Says @MmusiMaimane is ahead of himself. “I will see you regularly in this house, long before 2019. Lets work with people rather than grandstanding”. @TeamNews24 #PresidentElection

Ramaphosa says he wants to work with opposition parties in Parliament more and will engage with them going forward. He now acknowledges that his position is as a servant, and wants to serve with that in mind. #PresidentElection #NationalAssembly @TeamNews24

Ramaphosa: "I seek to execute that office with humility, faithfulness and dignity..."

Ramaphosa shares a moment he had with the chief justice before they entered in the #NationalAssembly. #PresidentElection @TeamNews24

Ramaphosa: “I am truly humbled to be given this great privilege to serve our people.” Acknowledges opposition parties and the media. “I will be coming to this house on a regular basis.” @TeamNews24 #PresidentElection

Ramaphosa thanks all members of National Assembly for the honour of electing him for this position. He says it's a great privilege to serve the people.

He closed his tablet now that Cyril Ramaphosa is speaking @TeamNews24 pic.twitter.com/ECkF3wLvke

Go to top
We live in a world where facts and fiction get blurred
In times of uncertainty you need journalism you can trust. For only R75 per month, you have access to a world of in-depth analyses, investigative journalism, top opinions and a range of features. Journalism strengthens democracy. Invest in the future today.
Subscribe to News24
Related Links
READ: Zuma's resignation speech in full
I resign, but not because I agree with you, Zuma tells the ANC
ANC will give Zuma reasons for recalling him
Next on News24
LIVE | Covid-19 in SA: 62 new deaths as cases hit 2 920 581