AS IT HAPPENED: A difficult choice had to be made, Masutha says on ICC withdrawal 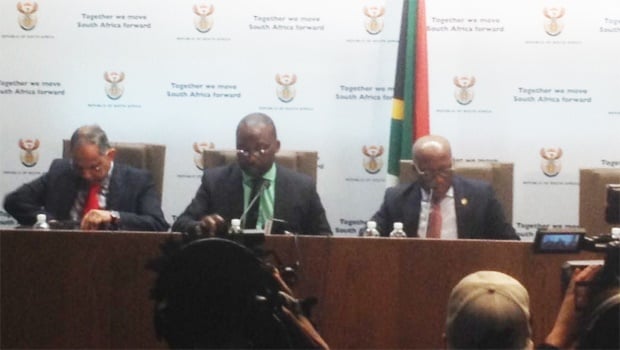 Min Masutha says the implementation of the Rome Statute is in conflict and inconsistent #ICC pic.twitter.com/DFHPwfVvzz

Masutha: After a drawn out effort to get this matter resolved, we have not been successful. We need to put this matter to rest, and move on as a country, promoting peace and prosperity in Africa, can't do this as long as we have this legal impediment.

#ICC Masutha insisting withdrawal from an agreement is the executive's prerogative, but parly & constitution to deal with laws @News24

Masutha: Can't speculate on what would happen if Omar al-Bashir returns to SA. Obligations that apply when SA is a member of Rome Statue continues to apply for 12 months after notification has been tabled. Would have to be looked at by those dealing with it at that time.

Masutha: SA will continue to actively promote dialogue and the peaceful resolution of conflicts on the African continent and elsewhere #ICC

#ICC Masutha: the issue of SA's reputation - re human rights - is a participant & will continue to honour various human rights orgnisation

Masutha: Constitution is clear, this decision is prerogative of the executive, and executive has exercised this prerogative, so don't foresee any legal difficulties arising from this.

Masutha: Our focus is to ensure that international law obligations are properly aligned with our domestic law, without the uncertainties and contradictions that exist.

Masutha: It is the prerogative of executive to enter into, and also withdraw, from international agreements.

Masutha: Most of the facts are public knowledge.

We have informed Speaker, chair of NCOP of executive decision. Want to make a ministerial statement to National Assembly, to elucidate the background leading to this decision.

#ICC Masutha: withdrawal will take effect 12 months after the SG has received notice. SA remains obligated to the statute till then @News24

#ICC Masutha: implementation of the Rome Statute is in conflict & inconsistent with provisions of the diplomatic immunities & privileges act

#ICC Masutha: implementation of the Rome Statute is in conflict & inconsistent with provisions of the diplomatic immunities & privileges act

Masutha: SA remains committed to fighting for human rights, will continue to actively promote dialogue and peaceful resolution of conflicts in SA and elsewhere.

Masutha: Application for leave to appeal SCA hearing set down for November 22 will now be withdrawn.

Masutha: In Bashir matter: SCA confirmed that heads of state enjoy diplomatic immunity against arrest. But because of signing statute SA waived such immunity and was thus obliged to arrest people wanted for crimes against humanity

SCA identified the problem which needs to be addressed.

Masutha: A bill will soon be table in Parliament

Masutha: SA hindered by Rome statute of ICC Act. This Act and Rome statute compels SA to arrest people who may enjoy diplomatic immunity but who are wanted by the ICC.

Briefing was scheduled to start at 10:00 but it appears to be starting at 10:30 instead.

It's time to leave the International Criminal Court

South Africa's announcement that it will quit the ICC is a major setback for the international court. My report:https://t.co/TVB6OQDPNv

Min. Masutha will today brief media on the matter of ICC and Sudanese President Omar Al Bashir in Pretoria. https://t.co/llaM5Qhriw

The starting point should not be withdrawal but the creation of a viable alternative to address the #impunitty the #ICC was meant to adress https://t.co/8rEDn7hQdh

New York - South Africa has decided to withdraw from the International Criminal Court following a dispute last year over a visit by Sudanese President Omar al-Bashir who is wanted by the tribunal for alleged war crimes, crimes against humanity and genocide.

A copy of the "Instrument of Withdrawal," dated Wednesday and signed by International Relations Minister Maite Nkoana-Mashabane, was obtained on Thursday by The Associated Press.

It states that South Africa "has found that its obligations with respect to the peaceful resolution of conflicts at times are incompatible with the interpretation given by the International Criminal Court of obligations contained in the Rome Statute" which established the court.

Under the Rome Statute, South Africa as a party to the ICC has an obligation to arrest anyone sought by the tribunal.

The charges against Bashir stem from the bloodshed in Sudan's western Darfur region which began in 2003 when rebels took up arms against the government in Khartoum, accusing it of discrimination and neglect. The United Nations says 300 000 people have died in the conflict and 2.7 million have fled their homes.

In June 2015, Bashir went to South Africa to attend an African Union summit but the government didn't arrest him. A court ordered him to remain in the country while judges deliberated on whether he should be arrested on the ICC warrants, but Bashir left for Sudan before the court ruled that he should indeed be arrested. The Supreme Court of Appeal later described the government's failure to arrest Bashir as "disgraceful conduct".

The government said in a statement in late June 2015 that it would consider withdrawing from the International Criminal Court as a "last resort" following the dispute over Bashir. It cited "contradictions" in the statute and said South Africa would have found it difficult to arrest Bashir because of treaty obligations to the African Union.

The African Union has asked the International Criminal Court to stop proceedings against sitting presidents and has said it will not compel any member states to arrest a leader on behalf of the ICC.

South Africa's decision to quit the court follows Tuesday's announcement that Burundi's President Pierre Nkurunziza signed legislation to make his country the first to withdraw from the ICC, which had said it would investigate recent political violence there.No country has ever withdrawn from the ICC, which was established to prosecute cases of genocide, war crimes and crimes against humanity.

Burundi's decision to withdraw follows a bitter dispute with the international community over the human rights situation in the East African country. More than a year of deadly violence has followed Nkurunziza's controversial decision to pursue a third term, which some have called unconstitutional.According to South Africa's document, its withdrawal will take effect one year after UN Secretary-General Ban Ki-moon is officially notified.

UN spokesperson Stephane Dujarric said he was "not confirming at this point" whether Ban had received a withdrawal document from South Africa.

READ THE FULL STORY
Go to top
We live in a world where facts and fiction get blurred
In times of uncertainty you need journalism you can trust. For only R75 per month, you have access to a world of in-depth analyses, investigative journalism, top opinions and a range of features. Journalism strengthens democracy. Invest in the future today.
Subscribe to News24
Next on News24
LIVE | SA to remain on Level 1, govt mulls mandatory vaccinations as 4th wave looms

Lucky Sunday for 3 Daily Lotto players
Full list of lottery results
Lockdown For
DAYS
HRS
MINS
Voting Booth
The EFF has voted with the DA to ensure they now govern Johannesburg, Tshwane and Ekurhuleni. Was this:
Please select an option Oops! Something went wrong, please try again later.
A brilliant strategic move by the DA not to make formal coalition agreements
24% - 1929 votes
A brilliant strategic move by the EFF to force the DA to negotiate with them
16% - 1305 votes
A recipe for disaster and five more years of unstable local government
60% - 4811 votes
Previous Results
Podcasts
PODCAST | The Story: New era in South African politics dawns - leaving ANC to lick its wounds