'Forward we shall march to a free Palestine', As it happened Pro Palestine supporters outside the American consulate in Sandton, with banners stating, Jerusalem is the capital of Palestine. @TeamNews24 pic.twitter.com/L7gTM8HbAY

This group of pro Palestine supporters are gathered at the American consulate in Sandton where they will hand over a memorandum. @TeamNews24 pic.twitter.com/t3e1fXldPG #GreatMarchOfReturn ANC Deputy Secretary General Jessie Duarte called out the DA for not releasing a statement on Gaza.@TeamNews24 pic.twitter.com/vv11P8BfB3

Protesters, including ANC deputy secretary general Jessie Duarte, have made their way to Parliament in solidarity with the "Great Return March".

Minister of International Relations and Cooperation Lindiwe Sisulu has condemned Israel's use of deadly force on Palestinian civilians and said it is totally unacceptable.

"It is a disaster that shouldn't happen in our time," Sisulu said toward the end of the media briefing on her department's budget for 2018 - 2019.

Much of the briefing was spent on Monday's violence, where the Israeli defence force killed at least 58 people and wounded more than 2 700 who protested along the Gaza border as the US opened its controversial new embassy in contested Jerusalem.

ANC DSG Jesse Duarte: We cannot rest until the people of Palestine are free, until the land is returned, and the killings have stopped. Palestine is 70 years under a occupation. #FreePalestine pic.twitter.com/cNS356UJdr

A group of concerned citizens from various backgrounds gathered outside the Port Elizabeth City Hall on Tuesday to show solidarity and to rally against the atrocities and massacre of the people of Gaza.

Among those in attendance was ANC regional secretary Themba Xathula, who said the ANC condemned the recent attack.

"We continue to say the struggle of Palestine is our struggle. There will be no free South Africa if the Palestinians aren't free.

"Xathula also called for solidarity and said a larger march against Israel needed to be organised. 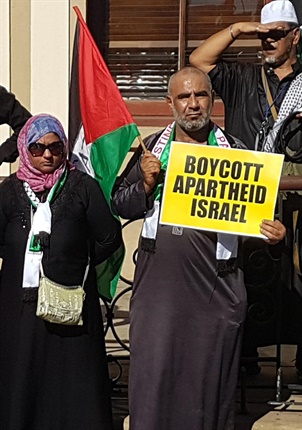 #FreePalestine Remembering all the lives lost in the cold blooded massacre of the Palestinian people yesterday. #FreePalestine pic.twitter.com/jUB23SWGg1

Heidi Grunebaum from SA Jews for Free Palestine says she is part of a growing number of Jewish people saying to Israel "It’s enough".

The ANC has joined other progressive forces in protest of the callous massacre of the Palestinian people by Israel yesterday. #FreePalestine #TwoStateSolution pic.twitter.com/Ih2tI8NWbz

#GreatMarchOfReturn these signs caused a commotion at the march. Organisers have distanced themselves from these protesters.@TeamNews24 pic.twitter.com/t7B5iUT9ss

Prayers and duahs before the memorandum is handed over. (Tammy Petersen, News24) 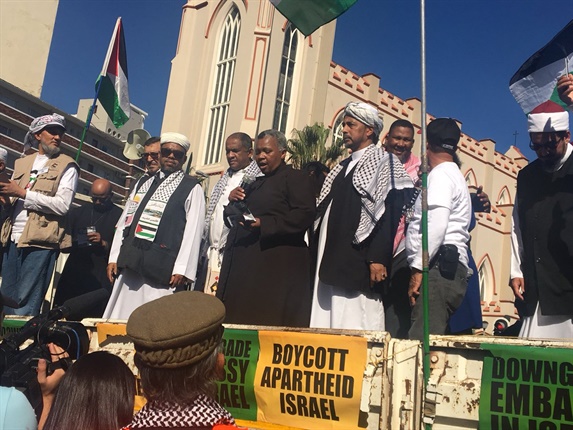 The protesters are starting to arrive at Parliament. #GreatReturnMarch @TeamNews24 pic.twitter.com/ymvuf2UokW

Opposite the gates of Parliament. (Tammy Petersen, News24) Protesters carry a coffin and signs that read "Free Palestine".

Fifty-eight people, including a baby, were killed in Gaza when the US Embassy was opened in Jerusalem on Monday. (Christina Pitt, News24)

Israel is bracing for a second day of violent clashes as Palestinians mark the "Nakba" (catastrophe), marking the 1948 war which led to Israel's creation. A makeshift coffin draped in the Palestinian flag is carried by protesters. #GreatReturnMarch @TeamNews24 pic.twitter.com/ZQ7KbVfeTY

Abdul-Muhaimin Hendricks, 1, on his father Ismail’s shoulders. They travelled all the way from Mitchells Plain. (Tammy Pteresen, News24) Plenty of Salaams and Molwenis as what looks like thousands of protesters walk to Parliament. #GreatReturnMarch @TeamNews24 pic.twitter.com/RUUujKwwZ4

The DA condemns the violence that has seen the killing of 55 Palestinians by Israeli security forces.

This loss of lives is indeed a tragedy for the people of Palestine and further exacerbates the conflict in the Middle East.

This position has also been adopted by the South African Parliament, any change in this position would need to be considered and decided on by Parliament. This has not taken place.The DA is committed to a two-state solution, where Israel and Palestine exist side by side, which is the position of the South African Government as well as the United Nations.

We believe that, because of our history, South Africa has the legitimacy and authority to act as steward in brokering peace in the Middle East.

It is crucial that South Africa remains a mediator and a special envoy in this conflict, advocating for a two-state solution so that the violence in the Middle East can come to an end.

The South African government needs to bring the decision to withdraw the ambassador to Parliament for ratification. Anything short of this can be viewed as abrogating our responsibility in this conflict.

A larger group has gathered outside a mosque in solidarity with Palestine. (Christina Pitt, News24)

A protester arrives at the #GreatReturnMarch in her eye-catching Toyota Corolla. @TeamNews24 pic.twitter.com/1FbRfS6ZfL

"Forward we shall march to a free Palestine," chant a small handful of protesters.#GreatMarchOfReturn@TeamNews24 pic.twitter.com/uCzcNQrKsp

The ANC Caucus is deeply saddened, shocked and condemns in the strongest possible terms the callous and cold-blooded killings by the Israel armed forces of over about 50 Palestinians and the injuring of over 2 700 of the 35 000 people who were part of the peaceful protest march against the opening of the historically provocative US Embassy in Jerusalem, yesterday, relocating it from Tel Aviv.

The ANC Caucus is in full support of the immediate withdrawal of South Africa’s Ambassador to Israel, Mr Sisa Ngombane, until further notice. This is a mild but apt diplomatic response.

Our democratic Parliament believes that peaceful protest marches are a normal civic or political activity in the whole civilised world.

There was absolutely no reason for the Israel armed forces to mercilessly mow down unarmed protesters in the Gaza Strip yesterday.

Today, the 15th of May, 2018 we stand in unflinching solidarity with the suffering Palestinians who commemorate 70 years of Nakba or Day of Catastrophe when in 1948, Israel forcefully occupied Palestinian territory, killed and exiled millions of Palestinians.

Sadly, the Nakba continues unabated as Israel resettles its people into Palestinian territories which is shrinking day by day. We call for a cessation of hostilities, resumption of truthful and honest negotiations on the part of Israel and a peaceful coexistence of the State of Palestine and Israel.

As the ANC in Parliament, we will continue to work with our government and all progressive forces in the world for the liberation of Palestine to isolate the murderous Israel Apartheid regime.

#GreatReturnMarch A pediatrician who volunteers his medical services to the people of Gaza through the People's Health Movement has showed up for the #GreatReturnMarch @TeamNews24 pic.twitter.com/CnZd0wh1Qw

“What’s happened in #Palestine over the last 70 years ... should never have been allowed to happen.” Sue Fawcus ahead of the #GreatReturnMarch @TeamNews24 pic.twitter.com/AA5vX7Jaoa

"What's happened in #Palestine over the last 70 years ... should never have been allowed to happen." - Sue Fawcus ahead of the #GreatReturnMarch.

#GreatReturnMarch participant Sue Fawcus says everyone should be outraged with what is happening in Palestine. @TeamNews24 pic.twitter.com/ehzBngthdj

Amaarah Marcus, 10, and Nuhaa Isaacs, 9, from Gordon’s Bay with a flag that reads "leave our Palestinian brothers and sisters alone". (Tammy Petersen, News24) These women say they were forcibly removed from their homes “those years” and are here to stand up against Israeli apartheid. #GreatReturnMarch @TeamNews24 pic.twitter.com/TDgXYaruHf

Protesters have started gathering on Keizersgracht Street for the #GreatReturnMarch. Proceedings start at 11:00. (Tammy Petersen, News24) Shaheedah Benjamin-Tape from Surrey Estate, Sukayna Isaacs from Woodstock and Shariefa Davids of Kenilworth are among the first to arrive for the #GreatReturnMarch in Cape Town. @TeamNews24 pic.twitter.com/7Gsv8W3MPT

In response to the violence which occurred amid the #GreatReturnMarch, a protest seemingly organised by the ANC, MJC & al-Quds foundation will take place in central Cape Town as of 11:00 on 15 May. pic.twitter.com/X3NhXnsKJT

Here's a brief history of the Nakba. #Nakba70 pic.twitter.com/gxymboRVDa

Today I woke up with a heavy heart, thinking about the people of Palestine, particularly mothers and fathers, as they try to make sense of the massacre of their 55-still counting and wounded sons and daughters. Heartfelt condolences #Justice #Peace

I stand firm on the principle of a two state solution in the Israel - Palestinian conflict, I condemn the violent actions taken by ISRAEL against Palestians. Violence can only result in more violence. Let there be peace in the Middle East.

Go to top
We live in a world where facts and fiction get blurred
In times of uncertainty you need journalism you can trust. For only R75 per month, you have access to a world of in-depth analyses, investigative journalism, top opinions and a range of features. Journalism strengthens democracy. Invest in the future today.
Subscribe to News24
Related Links
EFF demands Israeli ambassador leaves SA as Palestinian death toll climbs to 58
LATEST: Palestinians to bury their dead after 58 killed
SA pulls ambassador out of Israel over Gaza violence
Next on News24
LIVE | SA records 1 562 931 Covid-19 cases and 53 571 deaths

1 Daily Lotto player bags R407k!
Full list of lottery results
Lockdown For
DAYS
HRS
MINS
Voting Booth
Would you choose to continue working from home after the coronavirus lockdown if given the option?
Please select an option Oops! Something went wrong, please try again later.
Yes, it's much better for me
40% - 7986 votes
No ways! I can't wait to get back to the office
12% - 2327 votes
A mixture of both would suit me best
48% - 9689 votes
Previous Results
Podcasts
PODCAST | MISSING MATTHEW EPISODE 3: Decades of false starts add to a family's despair