OVERVIEW: 'Accused have no respect for human rights, they showed no mercy' - prosecutor in Hannah Cornelius case 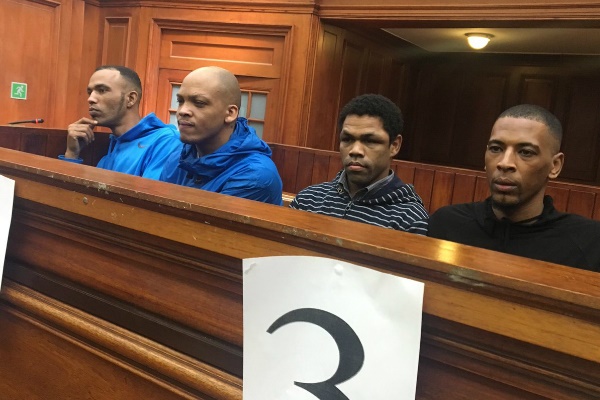 Sentencing proceedings against the men convicted of the murder of #HannahCornelius and the attempted murder of Cheslin Marsh. (Tammy Petersen, News24)
Live News Feed
Go to start

Judge Allie will hand down her sentence on Monday. Court adjourns. #HannahCornelius @TeamNews24

"The community at large needs to be protected from people like the accused, especially accused number one (Witbooi) and two (Parson), who called the shots," Adv Badenhorst says.

Willem Cornelius believes his family died with his daughter Hannah, and was buried when his wife "walked into the ocean a short time later and didn’t come back", the former magistrate testified in the Western Cape High Court on Thursday.

"Me and my son are not a family - we are the survivors who live in the ruins of what once was," Cornelius said during sentencing proceedings of the three men who raped and murdered his daughter.

"Fuck the cops" reads one tattoo on Geraldo Parsons' body. "Hungry for money, thirsty for blood", another reads.
Badenhorst points out one of a baboon with a woman's face with its legs open. 'He sees women as animals to satisfy his sexual pleasure'. #HannahCornelius @TeamNews24

ICYMI: One suspect has not yet been identified by the State, ostensibly a man called "Kaffertjie" who Witbooi mentioned in his confession. This suspect's DNA was also found at the rape scene.
READ MORE ON THIS

Elements of premeditation where Hannah Cornelius and Cheslin Marsh were threatened to hand over car keys or they would be killed, as well as revenge because Marsh had given them the wrong PIN, Badenhorst says.

If you have remorse, you must have unequivocal acceptance of your guilt and take responsibility for your actions, Adv Badenhorst says. They could have helped police find "Kaffertjie" too, he insists. #HannahCornelius @TeamNews24

If they wanted to show remorse, they could have by pleading guilty. Instead they claimed innocence, Advocate Badenhorst points out.

Regarding the rape of Hannah Cornelius, Adv Badenhorst says prescribed minimum setence is life in jail, specifically when committed with common purpose.

"The accused have no respect for human rights. They showed no mercy."

Adv Lenro Badenhorst submits 15 years for the robbery for all accused, except Van Niekerk, for whom he requests 20 years as he had been convicted of the same charge in 2013. He and his brother threatened a person with a knife, and robbed him of R2500. #HannahCornelius @TeamNews24

Julius is a suitable candidate for rehabilitation, Advocate Collins says. Asks court not to take into consideration his past convictions of "petty theft and house break-in".

Adv Scanlynn Collins, for Nashville Julius, says his client is 29 and was raised "in a respectful home". Pleasant and happy upbringing. He left school after becoming addicted to drugs. He has a son and "regrets how his life turned out". #HannahCornelius @TeamNews24 Adv Johnson, for Eben van Niekerk, says his client has been convicted of serious crimes. He is 28 and lived with his parents in Smartie Town, Cloetesville. He only completed Grade 5. #HannahCornelius @TeamNews24

Parsons previously alleged in his testimony that Eben van Niekerk had stabbed Cornelius in the neck after she refused to get out of the boot at Groenhof farm.

But Judge Rosheni Allie said Parsons' evidence had not been disputed, and that the stabbing was one of several fatal wounds Cornelius had suffered in Van Niekerk’s presence.

Parsons previously admitted guilt on all the charges, despite pleading not guilty at the start of the trial.

READ MORE ON THIS

It's clear Parsons is in a remorseful state, Adv Arend says. #HannahCornelius @TeamNews24

Adv Omar Arend says Geraldo Parsons has "owned up" to his crimes. He was the only one of the accused who testified to his invovlement and admitted guilt on the stand. News24 previously reported that Witbooi, in a confession to police, painted Geraldo Parsons as the mastermind.

Parsons, the only accused who elected to testify, claimed Witbooi had been the one calling the shots.

READ MORE ON THIS

Money Vernon Witbooi could've obtained through theft or scrounging is what he used to pay for his children's maintenance, Advocate Vismer says.

"I can't in good conscience say the cumulative weight of his circumstances constitute substantial and compelling circumstances," Vismer says. Leaves discretion if court's hands, but asks for a sentence that is "balanced". #HannahCornelius @TeamNews24

Vernon Witbooi's personal circumstances being presented through his advocate, Tim Vismer. He completed matric while in Brandvlei prison. He has 2 children.

"Drugs and the use of drugs played a role in the commission of these offences."

#HannahCornelius would have thought it unfair that her case was receiving so much attention when there were so many other vulnerable people going through the same thing, Mr Cornelius says. @TeamNews24

Mr Cornelius, a former magistrate, says he was medically boarded. He says he didn't believe he had the impartiality to continue being a magistrate after what had happend to Hannah.

Mr Cornelius says he doesn't believe his wife committed suicide, but she didn't have the physical or mental strength to deal with what happened. His son doesn't understand the concept of death, and asks when Hannah Cornelius is coming home because "her holiday is over".

Mr Cornelius says the effect of #HannahCornelius's death on his family was "beyond devastating". "I believe our family died with Hannah." He says his wife "walked into the ocean and didn't return". @TeamNews24

#HannahCornelius had no interest in a career in law, like her parents. "She said she wanted to do something that would help people," Mr Cornelius says. Judge Allie smiles. @TeamNews24

#HannahCornelius was well aware she was from a privileged background. For her 16th birthday, she wanted party packs for children from a nearby informal settlement, her proud father says. @TeamNews24

"All parents believe their children are exceptional. We were no different," Mr Cornelius says.

He speaks about her childhood; Hannah made friends easily and excelled at school.

#HannahCornelius' father, Willem Cornelius, is called to the stand. He wears a white rose on his suit jacket. "Before I start, I want to apologise that I am here for the first time... I didn't want to hear what had happened." @TeamNews24

Hannah Cornelius was like no one you have ever met. What she touched turned to gold, Prof Cornelius says.

The death sentence is not an option in SA. They will probably get parole in 25 years time, she points out.

“What kind of person sits in court, smiling, like they had only gotten up to mischief?” Paranoia and fear has become part of their lives, and is here to stay, Prof Cornelius says. #HannahCornelius @TeamNews24

"How does one explain… how a child who did nothing wrong walks into a perfect storm?"

"I am grateful that his life was spared, that he could testify. I feel the pain with #HannahCornelius and her parents and loved ones. I met her once, and her friendliness will always stay with me," Mrs Marsh says. @TeamNews24

Mrs Marsh says they couldn't afford a hearing aid for Cheslin, but would have bought it at a later stage because he had wanted to continue with his studies. Stellenbosch University wrote off his student debt of R22 000.

Doctors explained to her the seriousness of Cheslin's injuries, Mrs Marsh says. She thanks everyone who prayed for his recovery. #HannahCornelius @TeamNews24

Geraldo Parsons, accused 2, is crying while he listens to Mrs Marsh.

Mrs Marsh informed her family of what had happened to Cheslin. That afternoon she heard that #HannahCornelius had been murdered. Geraldo Parsons is holding his face in his hands. @TeamNews24

Mrs Marsh says Cheslin was worried about Hannah Cornelius, saying the men were going to hurt her.

She starts to cry. "I asked myself, 'what kind of people would do something like this?' He didn't do anything to them."

Mrs Marsh says she was called by police that day, asking if she's Cheslin's mother. She was summoned to a Kraaifontein health facility."When I saw my child like that, in pain and being seen to by doctors,I just wanted to hold him and say mom is here." #HannahCornelius @TeamNews24

Marilyn Marsh, Cheslin Marsh's mother, is called to the witness stand. Her son sits close by. She has been a single mother for the past seven years after the death of her husband.

Eben van Niekerk has a robbery conviction and Nashville Julius has five past convictions, ranging from theft to drug possession. #HannahCornelius @TeamNews24

Advocate Lenro Badenhorst refers to Geraldo Parsons' criminal record. Between 2009 and 2014, he was convicted of two charges of house break-in, theft, and possession of stolen goods. He was released on parole in 2015.

Friends and family of #HannahCornelius as well as community organisation representatives carrying white roses in the gallery. @TeamNews24 pic.twitter.com/Bkh9vBrQCd

Sentencing proceedings against the men convicted of the murder of #HannahCornelius and the attempted murder of Cheslin Marsh is expected to commence shortly in the Western Cape High Court. @TeamNews24 pic.twitter.com/wsww0lvpmy

Three men accused of the rape and murder of Hannah Cornelius and the attempted murder of her friend Cheslin Marsh were found guilty in the Western Cape High Court on Wednesday.

Hannah Cornelius murder trial: Sentencing proceedings to get under way

Eben Van Niekerk, Geraldo Parsons and Vernon Witbooi were found guilty of the rape and murder of Cornelius and the attempted murder of Marsh.

A fourth accused, Nashville Julius, who was only charged with robbery and kidnapping, was also found guilty.

READ FULL ARTICLE HERE
Go to top
We live in a world where facts and fiction get blurred
In times of uncertainty you need journalism you can trust. For only R75 per month, you have access to a world of in-depth analyses, investigative journalism, top opinions and a range of features. Journalism strengthens democracy. Invest in the future today.
Subscribe to News24
Related Links
Hannah Cornelius murder trial: Sentencing proceedings to get under way
'It's not a happy day for anybody' – Hannah Cornelius Foundation after guilty verdict
Hannah Cornelius accused found guilty on all charges
Next on News24
LIVE | Covid-19 in SA: 23 new deaths as cases hit 2 919 332