AS IT HAPPENED: State capture inquiry terms of reference 'not finalised' - Zondo 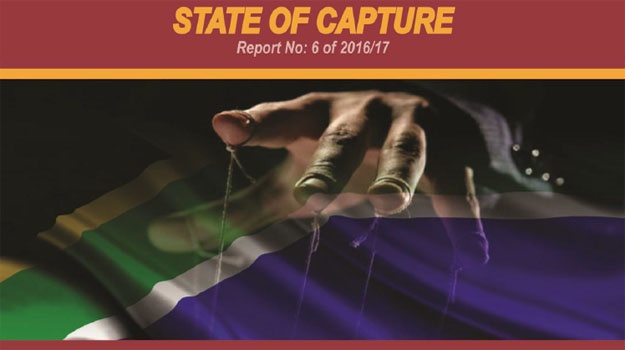 Zondo concludes: "The people of South Africa deserve a proper and thorough investigation."

Zondo says he hopes he was able to clarify things properly.

#StateCapture Chief Justice says he will investigate anyone, no matter who they are as long as its in the terms of reference @TeamNews24

Zondo: "I would not take this job if I had any fear of investigating anybody... this commission will do its job properly and will be guided by the evidence before it.

#StateCapture Justice Zondo strongly believes that government, and the Presidency will give their full support. Zondo believes all those in government want the allegations to be thoroughly investigated and tested @TeamNews24

Zondo makes reference to the "State of Capture" report by the Public Protector, and its importance in terms of establishing the terms of reference.

Zondo: "I don't believe there is anybody in government who doesn't want these allegations properly and thoroughly investigated."

#StateCapture Justice Zondo says he is aware of the issues around the scope of the terms of reference but stresses that in terms of law, it is the president that must give the terms and the commission can only start once they have been received @TeamNews24

#StateCapture Zondo reiterates that he is ready to get going once the regulations are in place and the terms of reference are given to him by Zuma. @TeamNews24

Zondo is asked about whether or not President Zuma is in breach of any time limits placed on him with regard to the state capture inquiry.

"My understanding was that the 30 days was the 30 days the president had to establish the commission, which he has done - the issue of the terms of reference might be another matter.

"The president appreciates the urgency of this inquiry, and I think that in his announcement he made that clear as well.

"I think the terms of reference should be finalised without any undue delay."

Zondo expresses concern that the 180-day time frame allocated might not be enough to conclude a thorough investigation.

"We cannot compromise the quality of the investigation," Zondo says, while also saying they would still have to establish if six months will be sufficient, once the process starts.

Zondo says he will be ready to go as soon as the terms of reference are ready. "I would like this commission to start its work yesterday," he says.

These are serious allegations and "must be investigated thoroughly".

#StateCapture Justice Zondo says the regulations will be ready in a couple of days, but that he has no idea when the terms of reference will be ready @TeamNews24

Zondo: "With regard to the terms of reference, I can tell you they are being given urgent attention, but I can't tell you more than that."

#StateCapture Justice Zondo says the law states who is the authority on the terms of reference. but that once he has them, there can be a challenge on them @TeamNews24

In response to a question about how much this inquiry could cost taxpayers, Zondo says that the budget has not yet been finalised.

#StateCapture Justice Zondo says he has met with President Jacob Zuma, who briefed him on the task. @TeamNews24

#StateCapture Justice Zondo says he has no input in the terms of reference, and he will wait for them, once received, if he feels they wont allow him to do his job, he will take the matter forward. @TeamNews24

Zondo has concluded his very brief statement on the details of the commission of inquiry into allegations of state capture, and is now fielding questions for clarity.

#StateCapture Justice Zondo says because of the controversies surrounding the terms of reference he will wait for them to be finalised. he adds that he helped with regulations and that key appointments will be made soon @TeamNews24

Zondo says he is sure the terms of reference are also being attended to with the urgency that it requires.

#StateCapture Justice Zondo announces that the terms of reference have not yet been finalised, but that the Presidency is still working on them. @TeamNews24

Zondo once again says the terms of reference have not yet been finalised - commission cannot finalise their own terms.

#StateCapture Justice Zondo says the allegations of state capture are "so serious that they go to the very foundations of our constitutional democracy." @TeamNews24

Zondo: "In the end, any looting and corruption robs the people of South Africa of the money that belongs to them, that should be used to improve their lives."

Zondo says the commission is still waiting on the terms of reference to be finalised. Says he thinks the presidency is working on them.

#StateCapture Justice Zondo says its been two weeks since it was announced that he would lead the commission of inquiry, so he thought it best to hold a briefing to update and answer any questions that journalists might have @TeamNews24

Justice Zondo kicks off the briefing.

#StateCapture Deputy Chief Justice Raymond Zondo is set to brief media on the State Capture Commission of inquiry. It is not yet certain what the briefing will be about, but it is expected that he may speak about the terms of reference @TeamNews24

Deputy Chief Justice Raymond Zondo is expected to reveal further details of the commission of inquiry into allegations of state capture at a briefing in Midrand on Tuesday as the state takes steps against some of the people implicated in the claims.

On January 9 this year President Jacob Zuma finally announced the establishment of the commission, as recommended by the former Public Protector Thuli Madonsela who released the report, State of Capture, in October 2016.

The report was the first part of an investigation into allegations that wealthy business people the Gupta family had a hand in some ministerial appointments and were benefitting financially from close associations with decision makers at government entities such as Eskom.

Is the net about to close on Zuma and his Gupta patronage network?

(By Richard Calland and Mike Law)

It all started with a wedding. A 200 plus entourage of friends and family landed their private aircraft at the Waterkloof Air Force Base in April 2013.

What South African’s didn’t know was that the country had already entered a new era of corruption that was to have a myriad negative consequences. Now, after years of legal obfuscation, political manipulation of ‘captured’ state institutions and prosecutorial agencies, Cyril Ramaphosa’s victory to succeed Jacob Zuma as president of the ruling African National Congress has opened up the possibility that an age of impunity will be replaced with a new era of public accountability.

Since the Gupta’s extravagant family wedding at Sun City a slew of revelations have come out. These range from the “State of Capture report”of the former Public Protector Thuli Madonsela, to the damning Gupta-leaks uncovered by investigative journalists AmaBhungane. All helped South Africans come to understand the shocking extent of the systemic corruption inextricably linked to the Gupta name.

The fall of Zuma

The end of Jacob Zuma’s tenure as South Africa’s president was sealed on Thursday when he filed his appeal against a court order that transferred the power to appoint the national director of public prosecutions to the deputy president.

That move, which came on the first day of the ANC’s national executive committee (NEC), angered party president Cyril Ramaphosa’s backers who ignored pleas by the new man to treat Zuma with dignity and went for his head.

Zuma’s decision to appeal the judgment that Ramaphosa appoint the successor to NPA head Shaun Abrahams was seen as a sign of “disrespect” by NEC members.

This, coupled with reports that Zuma and his ministers were on the verge of making wholesale changes at state-owned enterprises (SOEs), saw NEC members seen as close to Ramaphosa table a motion that Zuma’s term be cut short.

In its second major move against state capture, the National Prosecuting Authority has seized control of a dairy farm in the Free State and the bank accounts of Atul Gupta, companies co-owned by Duduzane Zuma and other entities in the Gupta empire.

News24 is in possession of the court order issued by the Free State High Court on Thursday that puts the Krynaauws Lust farm near Vrede in the Free State under curatorship of the NPA's Asset Forfeiture Unit (AFU) and reveals that the Free State's agricultural department - under then MEC Mosebenzi Zwane - paid R220 million to the Guptas in what the AFU calls a "scheme designed to defraud and steal monies from the department".

This is the second in a series of court actions as the NPA clamps down on companies and individuals implicated in state capture. The first applications targeted consulting firm McKinsey and advisory firm Trillian for irregular work done for Eskom.

Parliament’s Portfolio Committee on Justice and Correctional Services has expressed its concern with the “conflicting and confusing” messages being relayed by the office of the Public Protector regarding the remedial action recommended by her predecessor.

“That remedial action confines itself to what should form part of the inquiry. It is not for her to request an expansion of the terms of reference for the state capture inquiry. In fact, it is only the courts that have the power to amend or change the remedial action.”

READ MORE
Go to top
We live in a world where facts and fiction get blurred
In times of uncertainty you need journalism you can trust. For 14 free days, you can have access to a world of in-depth analyses, investigative journalism, top opinions and a range of features. Journalism strengthens democracy. Invest in the future today. Thereafter you will be billed R75 per month. You can cancel anytime and if you cancel within 14 days you won't be billed.
Subscribe to News24
Next on News24
BREAKING NEWS LIVE | Sanlam administrator who stole R6 million in investors’ pensions gets 15-year jail term