The City of Cape Town demolished about 30 shacks belonging to land occupiers in Empolweni informal settlement, Khayelitsha, on Thursday.

When GroundUp arrived at the scene, beds, paraffin stoves, blankets and other personal belongings were strewn around. The land is owned by the City.

It appears to have been occupied this past week, GroundUp reports.

Community leader Ntembeko Moyeni said the former backyarders moved onto the land because they have been deprived of their livelihoods.

"The residents no longer make money to pay rent because their places of work are closed because of the lockdown," he said.

Moyeni said township residents, themselves out of work, are no longer hiring people to do laundry, construction piece jobs, and domestic work. "Township residents can’t hire the backyarders to do piece jobs because they themselves don’t work owing to the lockdown," he said.

"The City has ordered some of them to stop selling braai meat, smileys, vetkoek and potato chips, so now they can’t make money to pay rent."

The former backyarders were stranded on the vacant land after the demolition, he said. "Even if they want to leave and go to their relatives’ or friends’ places, they can’t do so because taxis don't run." (While taxis are allowed to run, they are doing so at limited times and none were serving the area while GroundUp was there). 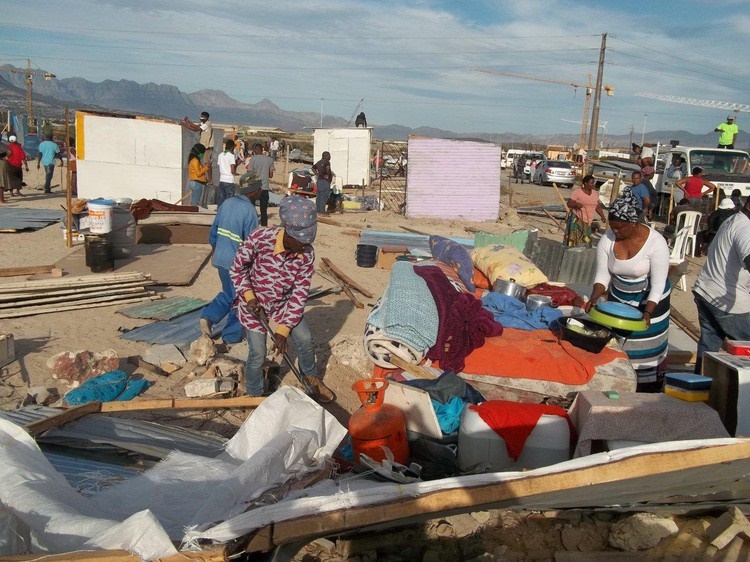 About 30 shacks were demolished on Thursday in Empolweni informal settlement. Photo: Vincent Lali

Land occupier Nolitha Melaphi said a friend phoned her about the demolition while she was buying essentials at Makhaza Mall in Khayelitsha.

"When I saw my building materials scattered around, my heart ached," she said.

Melaphi said she used to work serving tea at a market in Observatory before the lockdown. "I no longer earn money to support my family and pay rent because the lockdown rules have forced my bosses to shut down their business," she said.

Melaphi rented a backyard shack for R500 per month in section 43, Makhaza, where she was cramped with her mother and four kids.

"Before I prepared to go to work, I had to rouse my kids sleeping on the floor so that I could have space to move around. I had to put the washing on my bed when I bathed because the shack was cramped," Melaphi said.

"This is illegal. The law doesn’t allow the City to evict residents while they are on lockdown," he said. "How will people distance from each other when their shacks are demolished?"

"There are already cases of coronavirus infections here in Khayelitsha. Now the residents must gather together and risk getting an infection," he said.

But Mayco Member for Human Settlements Malusi Booi denied that this was an eviction. He said the court had granted the City an order to remove “unoccupied and unfinished structures in line with the provisions of the law and based on advice from legal professionals”.

"These structures were illegally erected on City-owned land. Land invasions are illegal," he said.

We live in a world where facts and fiction get blurred
In times of uncertainty you need journalism you can trust. For 14 free days, you can have access to a world of in-depth analyses, investigative journalism, top opinions and a range of features. Journalism strengthens democracy. Invest in the future today. Thereafter you will be billed R75 per month. You can cancel anytime and if you cancel within 14 days you won't be billed.
Subscribe to News24
Related Links
Durban residents rebuild shacks after demolition during lockdown
City of Cape Town tears down illegal structures in Makhaza
WATCH | 'Sober up, there are serious matters here': Cele cracks down on looters, illegal liquor...
Next on News24
LIVE | Covid-19 in SA: Cases rise by 212