GBV incidents have increased in the Eastern Cape under lockdown.
David Prado

The number of people in desperate need of psycho-social support services has spiked in the Eastern Cape due to the lockdown.

This was revealed by Eastern Cape Social Development MEC Siphokazi Mani-Lusithi during an interview on Tuesday.

Those in need included victims of gender-based violence, children whose parents had died from Covid-19 and other causes, as well as those suffering from depression and anxiety.

Lusithi said in the first quarter of 2020 ending in April, the department aided 2 450 victims with psycho-social support services.

The MEC revealed that in the second quarter, her department and its partners assisted 5 308 people.

The figures were from 168 non-profit organisations working in partnership with the social development department.

Lusithi said: "The increase of the numbers, we understand it to be mainly informed by the fact that during the pandemic, most households lose breadwinners and parents, leaving behind child-headed households."

Lusithi also added that during lockdown Level 5, her department recorded an increase in the number of victims of gender-based-violence, saying:

"During Level 5, victims found themselves trapped inside their houses with the perpetrators of the violence. Those increased the number of vulnerable people in the province. This necessitates government, in particular social development, to change how we do things. As the department, we don't have alternative resources besides our tight budget, but we want to double our efforts in working with NPOs."

Mani was speaking shortly after handing over a BMW electric car sponsored by the German government to East London-based Masimanyane Women's Support Centre.

The centre is one of the Social Development Department's critical partners offering shelter services, especially during the Covid-19 lockdown periods.

The donation of the electric car from BMW would assist in transporting victims of crime and violence to get counselling, para-legal support or shelter services. 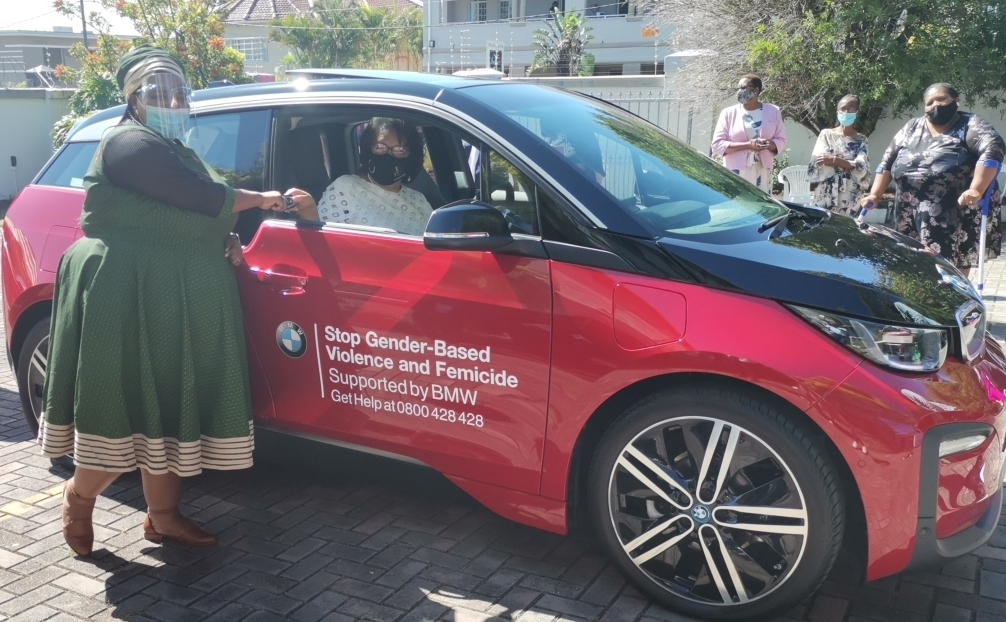 Eastern Cape social development MEC Siphokazi Mani-Lusithi hands over an electric car donation to one of the 180 NPOs the department works with to offer psycho-social support.
Supplied Supplied

"The numbers have evidently been affected by differential levels of the lockdown. Some forms of violence experienced by beneficiaries were intimate partner violence, family violence, survivors of rape, homeless and those due to a trauma-related incident. The majority were unemployed, and some found employment whilst at the shelter," said Lusithi.

The vehicle was meant to advance the work done by Masimanyane for victims of gender-based violence, said Lusithi.

"We need those organisations like Masimanyane to be empowered so that they assist government in achieving its mandate to support those vulnerable as we know that there is another pandemic of gender-based violence. The numbers are going up instead of going down," said Lusithi.

At the centres, victims also get to be economically active by doing bead work and crafts to make money, said Lusithi.

Maismanyane Women's Support Group director, Dr Lesley-Ann Foster said: "We are most grateful for the recognition that the president, the Department of Women [Youth and Persons with Disabilities] and the provincial department of social development has provided Masimanyane Women's Right's International. We are going to use the car for our community education and training programmes as well as our support services for survivors of rape and domestic violence. The vehicle will give us greater access to reach more people."

Foster said her organisation helps about 8 000 people in need of support per year and their centre also reach about 50 000 people per year through community-based programmes for services including counselling and paralegal services.

Lusithi said her department noted the increase in the numbers with concern.