A matric pass rate of above 80% would be an honour, but a lower pass rate would not be a train smash either, Basic Education Minister Angie Motshekga has said.

Motshekga was speaking at Sekano-Ntoane Secondary School in Soweto on Thursday where she was monitoring the first day of the Grade 12 final examinations.

The minister said while she was hoping for good results, she would understand if some pupils didn't make it because it was "a difficult year for everybody".

Gauteng Education MEC Panyaza Lesufi joined Motshekga and encouraged the pupils, who looked somewhat anxious as they sat at their socially distanced single desks with their timetables next to them. 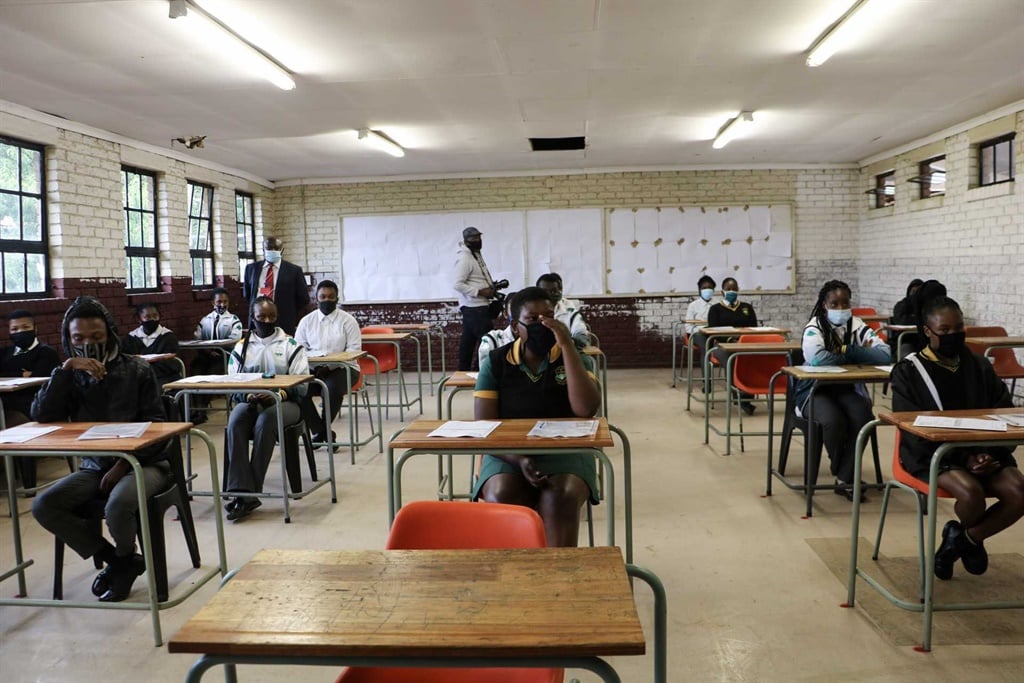 The minister said the 2020 academic year was unprecedented, but she was grateful they had managed to ensure the exams would continue despite schools being shut for almost two months due to Covid-19.

If we get what we got last year, for me it will be an honour or much more than I expected. I am not worried about the percentage now.

"We are even committed because we have a June exam. Those who can't do well, we [are] going to support them more, [for them] to write in June. We accept that it was a very difficult year. We appreciate the teachers and everybody, including parents. Parents did all they could to support their children. And I think, as a nation, we should be very grateful for that," Motshekga said.

The department initially issued guidelines which indicated that those who were positive would be excluded and would not be allowed to enter exam centres.

#MatricClassof2020 | Wet weather on day 1 of the 2020 NSC Matric exams. Grade 12 learners at Sekano-Ntoane Secondary in Soweto have taken their seats.@TeamNews24 pic.twitter.com/YxDWoAoI0W

Motshekga said the Department of Health had stepped in to offer assistance if pupils tested positive.

She said the department would put protocols in place and ensure pupils with Covid-19 wrote exams in isolation.

Motshekga also said the agreement was a relief because it meant those who would not be able to write would only sit for their final exams in June 2021 because there would no longer be supplementary exams in January. She said that would have meant the year was a waste for the pupils.

She applauded teachers for their dedication in providing Saturday, Sunday and afternoon classes.

She expressed confidence that pupils might get outstanding results because they received extra support, which previous matriculants had not received.

They (teachers) gave it their all. We also have to thank the private sector. They came to the party to help us with the Woza Matric. Different companies came to assist us.

Lesufi said he was thrilled because he never thought the exams would come.

"I know the long meetings we used to have with other MECs. In some instances, we had two meetings in the morning and three in the evening to review what we said in the morning because we were not sure."

He expressed joy that the day had finally arrived and that the teams had managed to prepare for the examinations under Covid-19 pandemic circumstances and pupils were finally ready to write.

"It's an amazing thing and we are thrilled and excited," he said.

We live in a world where facts and fiction get blurred
In times of uncertainty you need journalism you can trust. For 14 free days, you can have access to a world of in-depth analyses, investigative journalism, top opinions and a range of features. Journalism strengthens democracy. Invest in the future today. Thereafter you will be billed R75 per month. You can cancel anytime and if you cancel within 14 days you won't be billed.
Subscribe to News24
Related Links
Matric 2020: Anxious but hopeful, pupils say as D-day looms
Matric 2020: It's all systems go but candidates with temperatures above 38°C to write in isolation
Cyril Ramaphosa | Matric 2020: You have overcome many hurdles
Next on News24
LIVE | Covid-19 in SA: 4 227 new cases

Here are the Daily Lotto numbers
Full list of lottery results
Voting Booth
Have you and your family been counted in Census 2022?
Please select an option Oops! Something went wrong, please try again later.
Yes
47% - 3203 votes
No
53% - 3563 votes
Previous Results
Podcasts
PODCAST | The Story: How one incident at Stellenbosch University sheds light on deeper issues