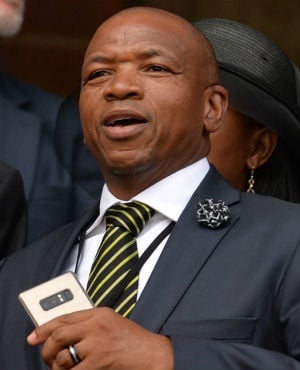 Supra Mahumapelo has indicated that he will resign. (Frennie Shivambu, Gallo Images, file)

McGluwa said Mahumapelo should still be held accountable for his role in a long list of scandals, which include a monument erected in honour of Jacob Zuma, tender irregularities and his "open affiliation and proud friendship" with the controversial Gupta family.

"The premier flatly refuses to share the damning forensic reports that have been commissioned by his office, pertaining to provincial departments, provincial entities, municipalities, and municipal entities," McGluwa said.

The North West Department of Health was recently placed under national administration, following maladministration and President Ramaphosa ordered an inter-ministerial task team to investigate the unfolding crisis in the province.

The Congress of the People (Cope) also welcomed "the long overdue resignation" of Mahumapelo on Tuesday night.

"We call upon the ANC to appoint in positions of power, men and women of integrity, servants who put the people of this country first," Cope's Glacier Nkhwashu said.

"Mahumapelo overstayed his welcome. Mahumapelo and his gang of looters have caused misery and destruction in North West that he and the ANC must take full responsibility for the mess."

We live in a world where facts and fiction get blurred
In times of uncertainty you need journalism you can trust. For only R75 per month, you have access to a world of in-depth analyses, investigative journalism, top opinions and a range of features. Journalism strengthens democracy. Invest in the future today.
Subscribe to News24
Related Links
ANC North West accepts Mahumapelo's resignation with 'apprehension - but great pride'
'Packing my bags' - Mahumapelo
I will give North West speaker a letter on Friday - Supra Mahumapelo
Next on News24
LIVE | SA records 1 559 960 Covid-19 cases and 53 423 deaths

1 person bags the Daily Lotto jackpot
Full list of lottery results
Lockdown For
DAYS
HRS
MINS
Voting Booth
Would you choose to continue working from home after the coronavirus lockdown if given the option?
Please select an option Oops! Something went wrong, please try again later.
Yes, it's much better for me
40% - 7295 votes
No ways! I can't wait to get back to the office
12% - 2128 votes
A mixture of both would suit me best
48% - 8795 votes
Previous Results
Podcasts
PODCAST | MISSING MATTHEW EPISODE 3: Decades of false starts add to a family's despair