Malema and Shivambu stay in control of EFF, party to elect 35 members to its highest decision-making body next 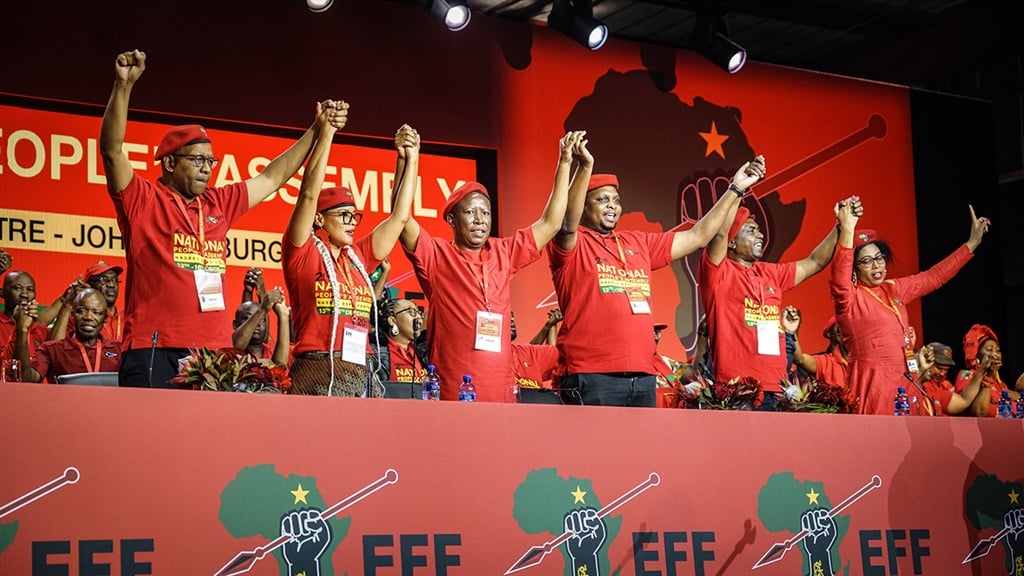 The EFF will on Sunday elect 35 additional members to form the party's central command team, who will serve as its highest decision-making structure in between conferences.

This after the party's top 6 leadership was elected, uncontested late on Saturday evening.

The EFF is hosting its second national elective conference at Nasrec, Johannesburg, where more than 3 000 delegates elected new leadership to serve the party for the next five years.

Nominations for the top six took place just after 22:00 on Saturday.

Julius Malema retained his position as commander-in-chief, Floyd Shivambu remained his deputy, however, everyone else who previously served with the two got the chop.

Attempts by former national chairperson Dali Mpofu to contest for deputy president and Gauteng chairperson Mandisa Mashego for the secretary general position failed to meet the threshold after they had both been nominated.

Some party insiders have called this the beginning of the end, saying the slate, which had been backed by a lobby group dubbed "amatorokisi" was a sign that the EFF was actually Malema's very own ANC Youth League project.

Others, who had been part of the "amapiano" slate had argued that it was important to break Malema and Shivambu up and to do things differently from the ANC, which both leaders had previously belonged to.

ALSO READ: Battle of the bands: Will it be Amatorokisi vs Amapiano at EFF's second conference?

"I honestly don't know anymore, I don't even care to caucus over additional members, they can do as they please," said one party member anonymously to News24.

[WATCH] "Haaaka Matorokisi, haaka" is the song of the evening as the new EFF top six is announced. @TeamNews24#EFFNPA2019 pic.twitter.com/WyvMxTNmiG

The insider said after a day of tense lobbying there was a glimmer of hope that Mpofu's attempt to deepen democracy in the organisation would work, however, those who supported him did not manage to secure the required numbers.

The EFF will spend Sunday deliberating over its discussion documents, which will be adopted and presented at the plenary.

We live in a world where facts and fiction get blurred
In times of uncertainty you need journalism you can trust. For 14 free days, you can have access to a world of in-depth analyses, investigative journalism, top opinions and a range of features. Journalism strengthens democracy. Invest in the future today. Thereafter you will be billed R75 per month. You can cancel anytime and if you cancel within 14 days you won't be billed.
Subscribe to News24
Related Links
WATCH | EFF delegates nominate members for Top 6 positions
Malema says he'll persuade EFF elective conference to agree to a women's command
Julius Malema: We are for media freedom, but not for those 'whose agenda is to destroy the EFF'
Next on News24
LIVE | Covid-19 in SA: 4 074 new cases