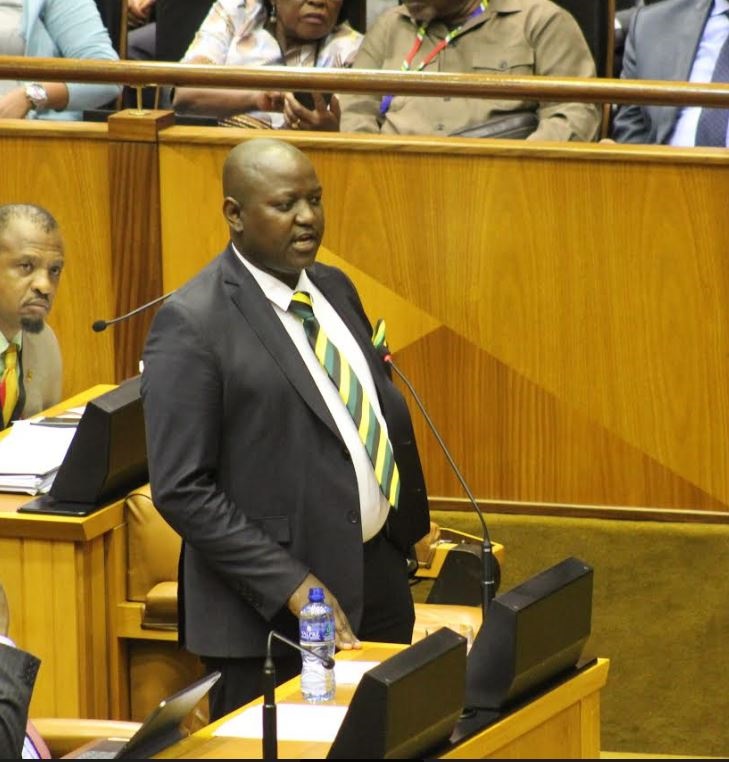 ANC MP Boy Mamabolo is facing more trouble after his former partner and mother of his child accused him of attempting to silence her over allegations of physical, verbal and emotional abuse.

Magdeline Makgatho claimed Mamabolo threatened to sue her for R1m if she did not retract the comments she made to the Sunday World newspaper accusing him of abuse.

She is also calling on him to resign as an MP.

"Boy must take accountability and resign as an MP as opposed to pretending to be crusader against women abuse."

Makgatho, through her lawyers, told News24 Mamabolo claimed allegations she had levelled against him were false and tarnished his name and image as a public figure and MP.

"I refuse to retract the statements as they are true. I refuse to be silenced and intimidated by him again," she said.

This continued at the SONA debate, with the EFF leader then accusing the president of being abusive to one of his former wives.

This week, Mamabolo and the Malemas reached an out-of-court agreement, with the ANC MP, who calls himself an activist against gender-based violence, apologising once more for the utterances he made in the National Assembly.

Last week, he tweeted an apology, which he promptly deleted as he was "redrafting".

Makgatho said the 2012 case, which was reported in the weekly newspaper, was one of numerous ones she had attempted to bring against the ANC MP.

She told News24 there were five cases between 2010 and 2012, some having been initiated by members of her family.

"I want to reopen these cases now because of the statement he made in Parliament that he is committed to exposing any form of GBV. He cannot mislead South Africa or conveniently forget about the trauma he put me through."

Makgatho, who is based in China, said Mamabolo had failed to pay maintenance for their child.

She added he could not be honourable as he was not someone who supported his child, saying he used to pay school fees but has since stopped doing so.

"He has indicated that he will only support our son if he lives with him and his wife but has made no attempts to gain primary care of our son which I would absolutely refuse for many reasons but particularly his abusive ways and his failure to support his son meaningfully."

No word from the ANC

Makgatho also claimed she had tried to get in touch with the ANC since last month's incident, citing the office of secretary-general Ace Magashule, chief whip Pemmy Majodina and national spokesperson Pule Mabe as those she had sent letters to.

She told News24 there was "acknowledgment of receipt" but no substantial response to her complaint.

Mamabolo, when reached for comment, was first reluctant to delve into the matter, saying he did not wish to get involved in anything to do with his former partner but decided to speak to News24.

He said he was aware she had written to the ANC, adding his wife, Khomotso Malotane, had also expressed her own set of concerns to the governing party.

He accused Makgatho of being used to settle political scores, questioning why she wanted to pursue charges from 2012 now that he was an MP.

Mamabolo claimed Makgatho had raised these complaints when he was made chairperson of the geographical names committee in Polokwane, where he was forced to resign and again when his name was on a list of party members set to be deployed to the provincial legislature in 2014.

"When I ascend, she brings these allegations. Last year, when the ANC listed us before the IEC, it called for those with issues to raise their concerns. She didn't say anything, maybe she thought I wasn't going to make it and now she's here," he said.

Mamabolo confirmed he had sent a lawyer's letter to Makgatho which he also forwarded to News24.

"There are two options here, reinstate those charges, let's go to court or withdraw."

Mamabolo referring to his current partner, questioned, why if he was so abusive, she did not experience any of the claims levelled against him by Makgatho.

He also denied not supporting their child, who is the eldest of his four, saying the child had a phone and he kept in touch with him that way.

"I take care of my child. She just wants the money to go into her account," he said.

Mamabolo also sent News24 a series of WhatsApps, including one showing Makgatho's bank card, claiming she had sent it to him because she wanted money sent to her directly.

He also sent WhatsApps showing his former partner saying she would never vote for the governing party, claiming it showed her personal views towards his political party and confirmed his suspicion that her actions were politically motivated.

Malotane Mamabolo, in her letter, raised similar concerns which her husband had communicated to News24.

She added while she did not want to get involved in the matter, it had become emotionally draining for her and their children.

"This woman has abused my family for too long, this is a person who insulted the ANC for a very long time in public, especially during elections," said Malotane who also argued Makagtho's intentions were politically motivated.

She claimed Mamabolo's former partner was an EFF member who had campaigned for the red berets during the lead-up to the 2019 general elections.

The ANC's national spokesperson, Pule Mabe, has not given News24 comment.

We live in a world where facts and fiction get blurred
In times of uncertainty you need journalism you can trust. For 14 free days, you can have access to a world of in-depth analyses, investigative journalism, top opinions and a range of features. Journalism strengthens democracy. Invest in the future today. Thereafter you will be billed R75 per month. You can cancel anytime and if you cancel within 14 days you won't be billed.
Subscribe to News24
Related Links
Julius Malema, Boy Mamabolo reach out-of-court settlement over domestic abuse claims
Boy Mamabolo apologises to Malemas: 'I was wrong'
Mpumelelo Mkhabela | Parliament: a place where the 'best' is ordinary and crudeness passes for...
Next on News24
LIVE | Covid-19 in SA: 4 074 new cases