Man arrested after being caught with R1.2m stuffed in two black bags in Cape Town house A 50-year-old man was arrested after he was found with an unaccounted-for R1.2 million in cash in two black bags in Strand, the City of Cape Town said on Monday.

The arrest follows a tip-off received by Cape Metro police officers about drug dealing at a premises in Strand.

According to the City's Mayoral Committee Member for Safety and Security, JP Smith, when officers arrived at the premises, a man ran into the house and officers gave chase and witnessed him hiding something in the kitchen drawer, which turned out to be dagga and mandrax tablets.

A further search of the premises led to the discovery of two black bags filled with cash.

"The 50-year-old suspect could not account for the money," said Smith.

"He was arrested for possession of drugs and detained at Strand SAPS," he added. 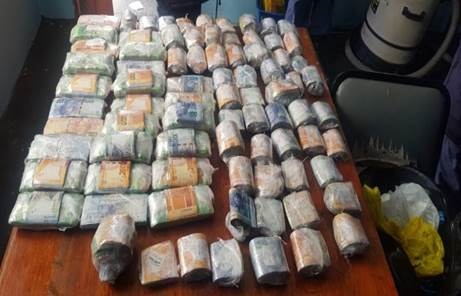 Meanwhile, in Kalkfontein, officers acted on another tip-off and found a plastic container containing 75 "bankies" of dagga next to a Wendy house on the premises.

The owner of the Wendy house was not at home and the officers took the confiscated drugs to Kuilsriver SAPS.

Another tip-off led officers to a premises along Old Marine Drive, where they discovered a suspect selling cigarettes.

They confiscated 73 cartons of Marlboro with an estimated street value of R175 200.

A 42-year-old suspect was arrested for contravening the Disaster Risk Management Act and was detained at Cape Town police station.

"These arrests and swift action by the City's Metro Police shows how important it is for the public to assist and inform our enforcement agencies of any suspicious behaviour. As officers cannot be everywhere all of the time, it is important for the community to provide information about illegal activities.

"Law abiding citizens are important partners in our fight against crime as they are our eyes and ears and help officers to more effectively protect our communities," said Smith.

Here are your Lotto and Lotto Plus results
Full list of lottery results
Lockdown For
DAYS
HRS
MINS
Voting Booth
A few positive Covid-19 cases have been confirmed at two SA rugby franchises.. Should teams proceed with return to training protocols?
Please select an option Oops! Something went wrong, please try again later.
Yes, SA rugby is already behind the eight ball compared to New Zealand and Australia
14% - 127 votes
It’s too dangerous, the country is only now heading into the Covid-19 storm!
38% - 355 votes
Get the ball rolling, Covid-19 is here to stay as the 'new normal'
48% - 443 votes
Previous Results
Podcasts
PODCAST | THE STORY: What next for Gauteng as it overtakes Western Cape as SA's Covid-19 hotspot