Piet Mabotja walks down to the cells after being handed two life sentences for the rape and murder of a woman in the Department of Agriculture, Forestry and Fisheries building in Pretoria in 2017.
Alex Mitchley, News24

A man who is behind bars for raping and murdering a woman inside a government building in Tshwane is seemingly active on social media and using a cellphone in prison, since his arrest in November 2018.

Piet Mabotja, who was sentenced to life imprisonment for raping and murdering Nomathamsanqa Regina Majola by the Gauteng High Court in Pretoria, is now facing an investigation by the Department of Correctional Services for allegedly holding contraband.

Going by the name “Peter Mabotja” on Facebook, Mabotja has posted several images on the closed account, that only shows when he updates his profile or cover picture.

READ | Man gets 2 life terms for rape, murder of colleague and stuffing her body in shaft

Most of the images, posted in February, show Mabotja wearing the same white long-sleeved collar shirt, short pants and brown shoes. It is believed that these photos were taken while in Kgosi Mampuru prison, where he is currently being held.

There is also an image of Mabotja posing in underwear at what looks to be a bodybuilding competition, with Department of Correctional Services banners in the background. On this image, one of Mabotja's Facebook friends commented, asking if he was in prison, to which he replied: "Okay prisoners". 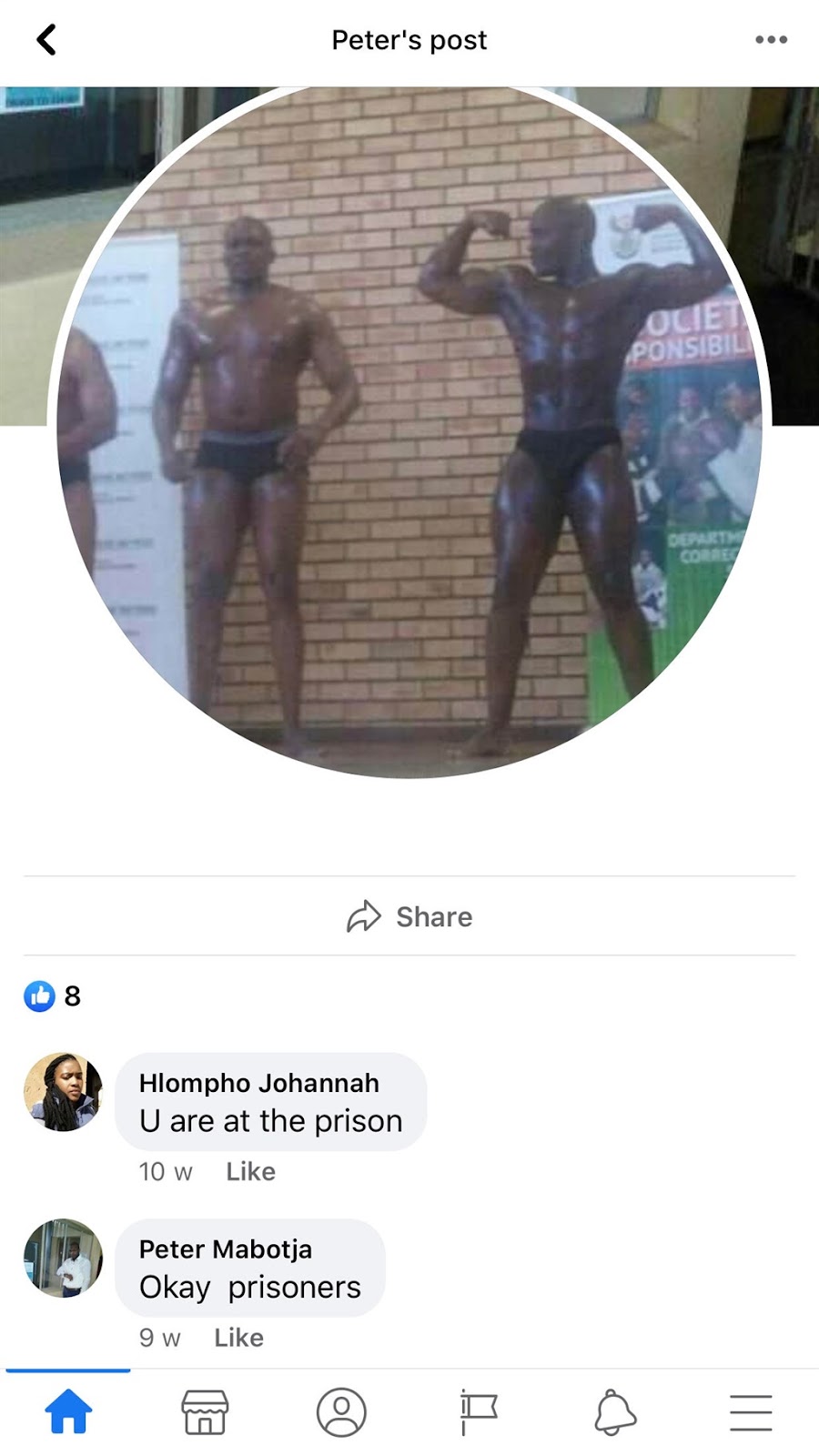 On 8 February, when he would have still been in custody awaiting trial, Mabotja updated his profile picture to an image of him wearing the white long-sleeved collar shirt, short brown pants and brown shoes. 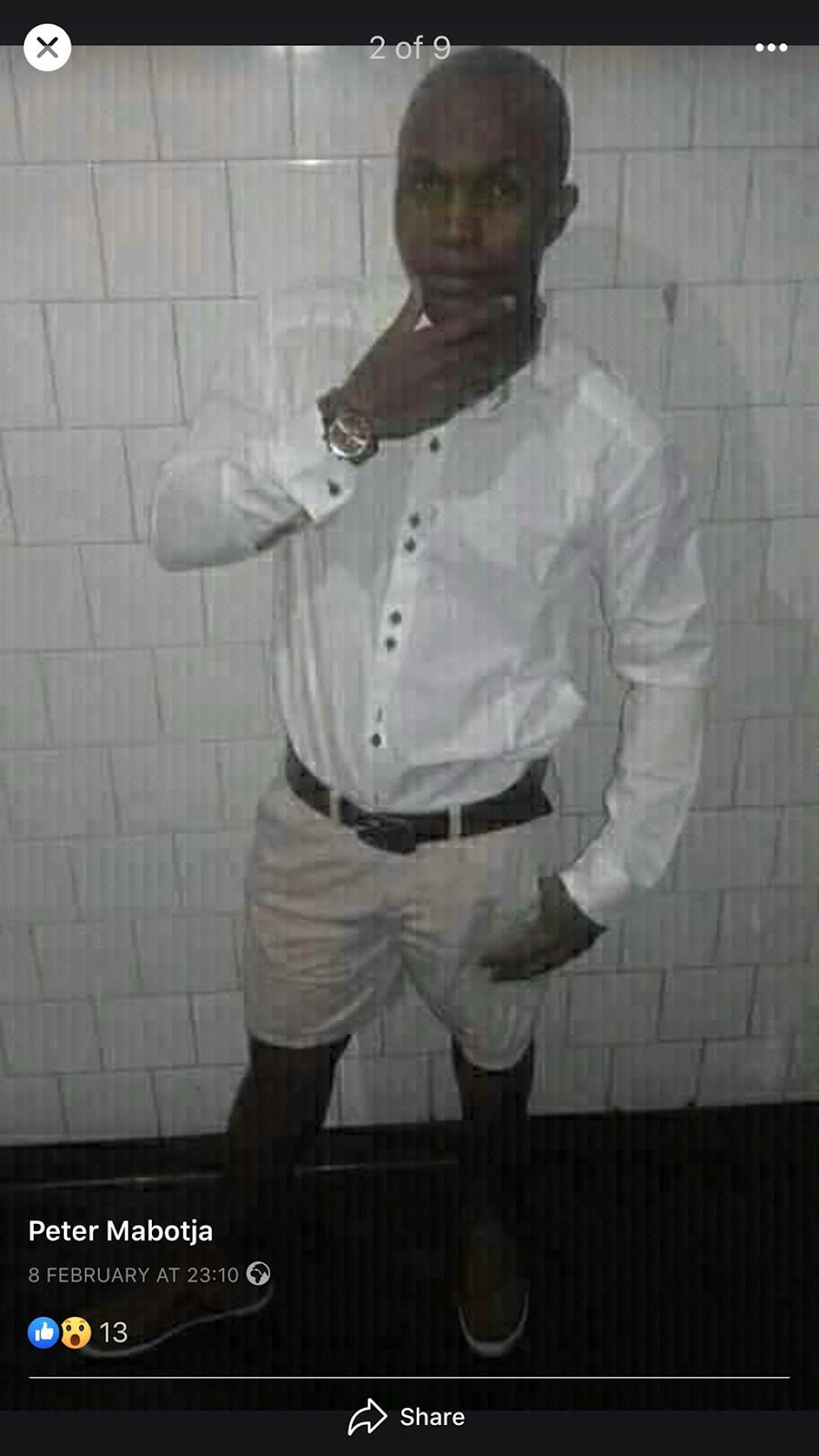 During his sentencing on Wednesday in the Gauteng High Court, sitting in the Pretoria North Magistrate's Court, Mabotja wore a similar outfit.

Mabotja has been in custody since his arrest on 16 November 2018.

Correctional services spokesperson Singabakho Nxumalo told News24 that the existence of a social media account linked to an inmate and the images on the account were disturbing. He said that a full-scale investigation will be launched soon.

"What makes things worse, is that this inmate could also be engaged in other activities with the outside communities through social media," Nxumalo said.

READ| Man who allegedly raped, and murdered woman and hid body in building was on parole

"Contraband does pose a serious danger not only to our officials and other inmates in our centres, but the lives of ordinary citizens are also at risk. It is therefore something that requires us as correctional services to condemn it and take firm measures against those who smuggle items like cellphones."

Nxumalo said the investigation will be launched in view of the seriousness of the offence and becauset Mabotja is a repeat offender.

Mabotja was found guilty of murder and attempted rape in another case in KwaMhlanga, Mpumalanga. He was sentenced to 18 years in prison on 1 February 2007 but only served about eight years before being released on parole on 27 November 2015. His parole was supposed to end in 2024.

It was while on parole that Mabotja moved to Pretoria and two years later raped and murdered Majola in 2017. He also raped another woman in 2018 in Mamelodi, where he lived.

We live in a world where facts and fiction get blurred
In times of uncertainty you need journalism you can trust. For 14 free days, you can have access to a world of in-depth analyses, investigative journalism, top opinions and a range of features. Journalism strengthens democracy. Invest in the future today. Thereafter you will be billed R75 per month. You can cancel anytime and if you cancel within 14 days you won't be billed.
Subscribe to News24
Related Links
Lamola: Review of prison parole system is imminent
Prison officials summoned by Lamola to address parole system 'flaws'
SA prisons are the 'worst places', offer 'no rehab', says Fees Must Fall activist Kanya Cekeshe
Next on News24
BREAKING NEWS LIVE | 3 die in deadly Durban crash