Man burnt to death for allegedly stealing a cellphone 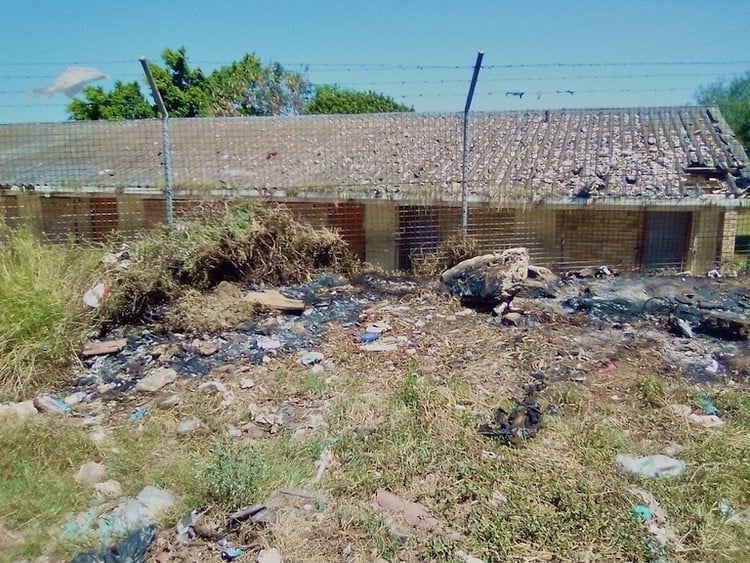 More than one person has been beaten and set alight in mob justice killings at this site next to a primary school in Port Elizabeth.
PHOTO: GroundUp

Vigilante violence in the Powerline informal settlement in Motherwell claimed another life on Tuesday, GroundUp reported.

For the second time in a month, a suspected criminal was beaten and then set on fire.

The victim was accused of stealing a cellphone and some money.

A resident, who did not wish to be identified, said the man had pleaded for his life and "returned the cellphone he had stolen to its owner".

He said "he would repay the money".

"I felt sorry for him. How could he get killed for stealing a cellphone?" she asked.

"I blame the police for failing to come in time to rescue him.

What message does this send to our children? Do you think violence will end in this country when young people are exposed to it? There are still remains of ashes of a man who was burned a couple of weeks ago outside the gate of the same school and children always look at it with sadness.

A witness said he called the police when he saw the man being dragged to Nxanelwimfundo Primary School.

Calling police is a 'waste of time'

"I was assured by the person who responded to the call that they were swiftly dispatching a van. I then went to do my errands, satisfied that the police were coming to save the man," he said.

I returned after about an hour and I was told by people who were coming from the scene that the man had been burnt. Still there was no sign of a police van.

He said next time he would not bother to call the police as it had been "a waste of my money and time".

Another resident said some weeks ago at about 18:00, "a child came running to me, saying there was a man being beaten".

She said she called the police. The police arrived after 19:00.

The man had already been burnt. He had been accused of "breaking into people's shacks".

"People are living in perpetual fear of these mobs and they have lost confidence with the police (sic)," a resident said.

2 people bag R250k in the Daily Lotto jackpot!
Full list of lottery results
Lockdown For
DAYS
HRS
MINS
Voting Booth
When a Covid-19 vaccine for under 16's becomes available, will you be taking your children to get it?
Please select an option Oops! Something went wrong, please try again later.
Yes, immediately!
38% - 3400 votes
I'll wait to see how others respond
26% - 2334 votes
No, I don't think they need it
36% - 3280 votes
Previous Results
Podcasts
PODCAST | MISSING MATTHEW EPISODE 3: Decades of false starts add to a family's despair